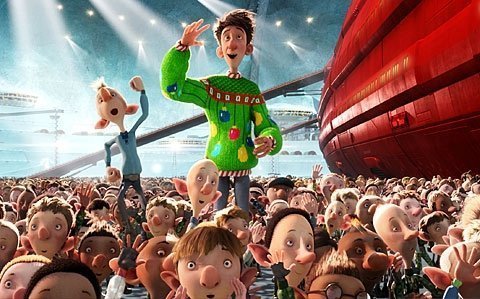 NEW YORK (CNS) — Cartoonist Thomas Nast, who popularized Santa Claus in the 1880s, could not have envisioned the high-tech world of “Arthur Christmas” (Columbia), a mostly delightful 3-D animated comedy which equips Kris Kringle with a stealth ship, GPS navigation, battalions of ninjalike elves, and scanners that measure children for “naughty” or “nice.”
¬†
Directed and co-written (with Peter Baynham) by first-time helmer Sarah Smith, and co-produced by Aardman Animations — the company behind the beloved “Wallace & Gromit” series — “Arthur Christmas” has a first-rate and very funny script and showcases some of the best voice work in a long time.
¬†
Although it has absolutely nothing to do with the true meaning of the Nativity, the film does offer a good commentary on the commercialization of the holiday and reminds viewers of the importance of family, loyalty, and being faithful to one’s promise.
¬†
It’s Christmas Eve, and North Pole Mission Control, hidden deep below the Arctic Circle, is buzzing. Santa Claus (voice of Jim Broadbent) is getting ready for his 70th mission. He’s the 20th man to wear the red suit since the first — St. Nicholas (of course).
¬†
But our Santa’s getting long in the tooth, and his ambitious, narcissistic son Steve (voice of Hugh Laurie) is anxious to inherit “the greatest job in the world.” Steve runs the sophisticated global network of gift distribution, relying on technology to eliminate any possibility of human (or elfin) error.
¬†
Decidedly more low-tech is Steve’s younger brother, the humble Arthur (voice of James McAvoy). His job is to answer, by hand, all the letters Santa receives from children. “Santa is real,” he writes with wide-eyed wonder. “He’s the greatest man ever.”
¬†
Disaster strikes in the form of a single undelivered present. Steve convinces Santa that this glitch is well within the margin of error, and both turn in for the night. But Arthur is aghast, as a little girl from England who wrote to Santa asking for a pink bicycle will be left disappointed. Something must be done!
¬†
To the rescue comes Santa’s dad, Grandsanta (voice of Bill Nighy). Now 136 years old, he misses the excitement of having the top job. He’s upset, too, at how Santa has taken a back seat to all the gadgets and gizmos.
¬†
Grandsanta uncovers the old sleigh, rounds up the rather aged reindeer, procures a supply of magic dust (to enable flight), and persuades Arthur to join him on one last mission.
¬†
Grandsanta, whose false teeth keep popping out, provides the film’s most questionable humor as well as some of its funniest lines. He cannot, for instance, remember the reindeers’ names. “Prancer, Dancer,” he begins. “Vixen … Bambi? Joe?”
¬†
Accompanied by Bryony (voice of Ashley Jensen) — a stowaway elf from the Giftwrap Battalion — Arthur and Grandsanta rocket off to deliver the overlooked package before sunrise.
¬†
“Arthur Christmas” features at least few benign references to the real holiday. Crash-landing in Africa, for example, the trio of travelers is surrounded by ferocious lions. Arthur sings “Silent Night” to persuade the beasts to “sleep in heavenly peace.”
¬†
The film contains some rude humor and cartoonish thrills. The Catholic News Service classification is A-II — adults and adolescents. The Motion Picture Association of America rating is PG — parental guidance suggested. Some material may not be suitable for children.
¬†
– – –
¬†
McAleer is a guest reviewer for Catholic News Service.