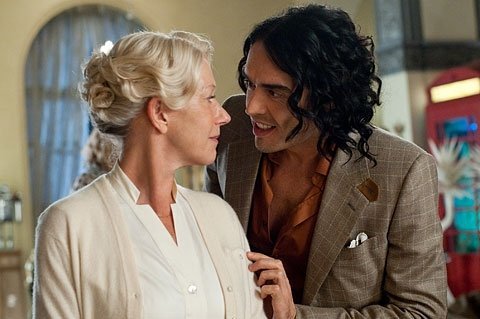 NEW YORK (CNS) — Though hardly a cinematic landmark, writer-director Steve Gordon’s 1981 comedy "Arthur" was one of that year’s most popular films and garnered two Academy Awards: one for John Gielgud as best supporting actor, the other for the pleasant — if somewhat bland — "Arthur’s Theme (Best That You Can Do)," as best original song.

Flash-forward 30 years and director Jason Winer’s eponymous remake (Warner Bros.) just about matches that modest legacy, presenting — as did the original — a mixed bag of both moral and aesthetic qualities.

Russell Brand takes Dudley Moore’s place in the title role. As the utterly frivolous, merrily alcoholic heir to a billion-dollar corporate fortune, Arthur Bach lurches from one headline-worthy mishap to another, aided and abetted by his chauffer Bitterman (Luis Guzman).

Exasperated by such antics, his mother Vivienne (Geraldine James) threatens to disinherit Arthur unless he agrees to marry Susan (Jennifer Garner), a domineering executive in the higher reaches of the family’s conglomerate who plans to curb his wayward lifestyle.

A chance encounter with Naomi (Greta Gerwig), a working-class New York City tour guide, however, leaves Arthur — heretofore a heedless playboy — smitten and forced to choose between luxury and love.

Observing her charge’s adventures, through it all, is Helen Mirren as Hobson, the man-boy’s affectionate but not uncritical British nanny — the distaff counterpart to Gielgud’s tart-tongued butler in the original.

As Gielgud did before her, Mirren provides most of the fitful laughs on offer by delivering a sophisticated running commentary on Arthur’s inexhaustible childishness. (In some ways, both versions of this relationship recall the dynamic between comic novelist P.G. Wodehouse’s delightfully dim man-about-town Bertie Wooster and Bertie’s supremely urbane "gentleman’s gentleman," Jeeves.)

Peter Baynham’s script intermittently touches on the limits of materialism, especially as plot developments leave Arthur feeling increasingly isolated and no longer distracted by the partying and toys (e.g., a magnetic bed that seemingly floats in mid-air) that once cheered him.

At one point, in fact, Arthur re-enacts — albeit comically — a pivotal incident in the life of St. Francis of Assisi by divesting himself of the formal, upper-class clothing that symbolizes both his ultimately unsatisfying wealth and his exalted but restrictive social status.

Yet the movie gives a pass to Arthur’s promiscuity, and tends to trivialize his problem drinking — early scenes of which, indeed, serve as unabashed product placement for Maker’s Mark, a pricy brand of Kentucky bourbon.

The film contains a fleeting nongraphic bedroom scene, an obscured nude image, brief irreverent humor, frequent sexual references, a couple of uses of profanity and a few crude terms. The Catholic News Service classification is A-III — adults. The Motion Picture Association of America rating is PG-13 — parents strongly cautioned. Some material may be inappropriate for children under 13.