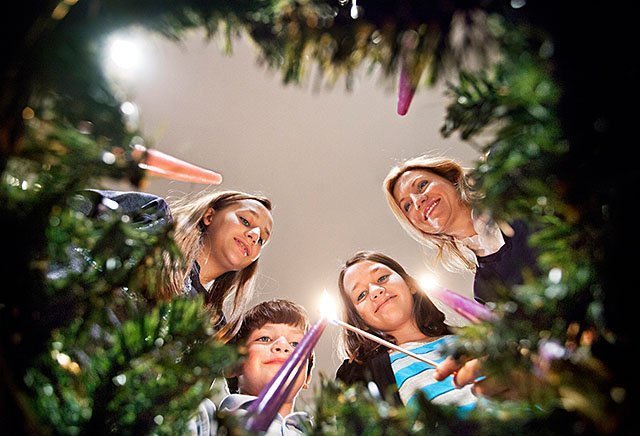 Monica Wallace, 13, with brother MJ, 6, sister Grace, 11, and mother Christine, light an Advent wreath at their Maryland home in 2012. Advent, a season of joyful expectation before Christmas, begins Dec. 1 this year.

Even before Halloween jack-o-lanterns were carved, retailers were advertising the joys of Christmas gift-giving — and getting — on television. And no sooner will the Thanksgiving turkey be carved before radio stations start playing Christmas music, some of them nonstop, through Christmas Day.

"In a sense we’ve done this backwards," said Vicky Tufano, general editor for Chicago-based Liturgy Training Publications, which publishes books and other resources for parishes and families on all manner of Catholic life and practice. "We put up the Christmas tree four weeks before Christmas, and we throw it out the next day" after Christmas.

It requires some intentional work by families, and sometimes even parishes, to keep the intent of Advent intact, Tufano told Catholic News Service.

She acknowledged that even Catholic families unused to instilling Advent customs in their homes might be feeling uneasy over the ever-encroaching Christmas creep, even if they can’t put their uneasiness into words.

Christmas, she said, "gets closer and it starts earlier and earlier," Tufano said, taking note of the new craze of stores opening the night of Thanksgiving Day to get more shoppers, and more money.

"As Catholics, we kind of live in a symbolic ritual world, and we need to interpret the world as we believe it is — that it’s been redeemed by Christ," she said, even if it requires explaining the presence of so many Christmas lights at the mall. "Think about it and talk about it with your family as a way of Christ being made manifest for the world to see."

Parishes have "gotten the message" about maintaining the liturgical integrity of Advent and resisting Christmas carols, she added, but "the harder thing is keeping the parish groups from having their Christmas parties on the fourth of December."

"We’re challenged constantly by the messages of urgency toward ‘retail Christmas’ beginning before Halloween," said Patricia J. Hughes, director of the Office of Liturgy for the Diocese of Dallas, in an article written last December for The Texas Catholic, diocesan newspaper.

"The church gives us Advent to joyfully anticipate the celebration of justice and peace that came with the birth of God-becoming-man, over 2,000 years ago," Hughes said. "Today, the secular world often mutes our joyful anticipation of the time when Christ returns at the ‘end of time.’"

She added, "There is something wonderful that happens in the church if we turn our hearts toward cooperating with Advent. The parish can help the regular Mass participants as well as visitors and guests by creating spaces of ‘pause’ and ‘time out.’"

Hughes suggested mingling ancient and modern: "Sacrifice a video game for a YouTube video that celebrates the music of the church’s joyful season, both Advent songs of longing and Christmas hymns traditional and true."

She said, "Christmas caroling or joining in the celebration of Las Posadas can link the secular season with sacred celebration of Jesus’ birth. Advent is a wondrous time to meet a friend for Mass and a simple meal — perhaps someone who has been away from the church and needs a fresh welcome. We evangelize through building these relationships. … The point is the pause that we make during the season — an intentional, simple, doable reminder about the presence of Christ in your life and in the world."

Rita Thiron, executive director of the Federation of Diocesan Liturgical Commissions, stressed formation as a way to keep the meaning of Advent strong.

"The parish as a whole needs to have a concerted effort to celebrate Advent. That means formation for both the adults and children as to what Advent is," Thiron told CNS. "Advent by its very definition has a twofold character: to prepare for the first time when Christ came into the world and to prepare for Christ’s second coming."

Thiron added, "The hearts and minds of people will always be buffeted by things that are antithetical to the church, and that’s why it’s to the church’s credit that they stand firm not only in their beliefs but in their practices and devotions and certainly the liturgy. But I don’t think we’re too far gone at all. We just need to be very strong in our formation."

When Christmas comes Dec. 25, she said, Christians should celebrate for 12 days.

"I think it’s easy to look at the secular onslaught and completely separate it from the cause, which is the greatest — well, if not the greatest, most joyful event in Christianity," said Marci Alborghetti, author of the Advent guide "People of the Nativity." "I think that’s really the key — to offer a reason."

Of the secular pre-Christmas avalanche, Alborghetti said, "Do we overdo it? Certainly. Does it get ridiculous? Absolutely. But we’ve got cause to be ridiculous and overdoing it. I’m starting to get catalogs now before Halloween. It’s nuts. You continually have to bring it back to the reason, to be as spiritually excited and thrilled as people tend to try to be from the secular perspective."

Alborghetti suggested taking a historical perspective: "God is in relationship with us. He develops relationships with us. For all the tension of gift-giving, it’s not easy, because gifts signify relationships, and relationships aren’t easy. It wasn’t easy for Mary and Joseph. We are in times of doubt and uncertainty and political violence and anger."

She added, "We need that ‘comfort and joy’ as the song said as the Jews and the people of their time did. I think that’s something people tend to forget."