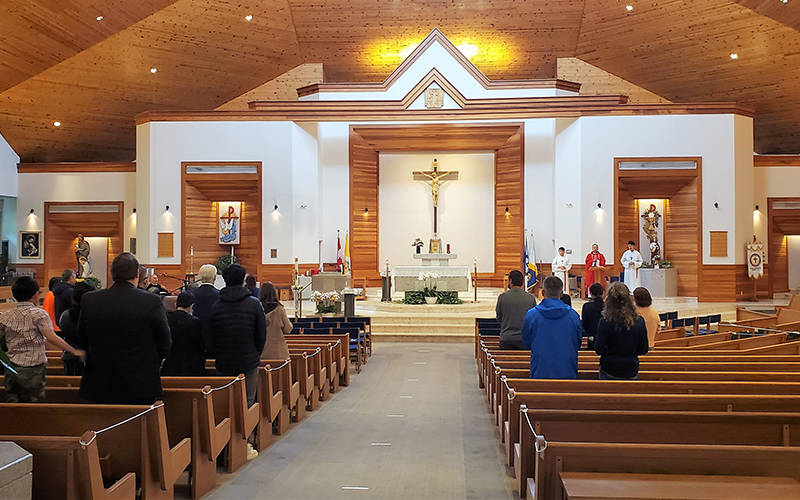 British Columbia had not allowed indoor Masses since November, so Father Harrison Ayre of St. Peter’s Church in Nanaimo decided Easter was a good time to bring people together, outdoors and socially distanced inside their cars, for Mass in the parking lot.

More than 20 volunteers were involved in the setup. They constructed a platform so that parishioners could see Father Ayre even from the back row of cars. They covered the platform and the plastic-table altar with a tent in case of rain. They arranged for an FM transmitter so that people could hear the prayers and homily inside their cars. The musicians figured out how to run their microphones into the transmitter.

What they didn’t count on was the wind. Though the altar and the tent were weighted down with 99-pound blocks, they were lifted by the wind, turned over and smashed into the candles, the flowers and the platform.

The incident was an example of how Catholic churches throughout Canada are trying to serve the people under ever-changing pandemic rules as government health officials deal with variants in the coronavirus.

In mid-April, British Columbia Premier John Horgan announced that a ban on public worship would be extended an additional five weeks.

The restrictions are now scheduled to expire after the Victoria Day long weekend, which ends May 24. These health orders prohibit indoor dining, indoor group fitness, public worship by faith communities, and gathering with people outside one’s household, among other activities.

Vancouver Archbishop J. Michael Miller said: “Given the high number of cases in B.C., I am not surprised that the current restrictions are remaining in place. I continue to hope that the situation will soon improve, so that we can once again resume in-person worship, which is so necessary to us as a sacramental church.”

In the neighboring province of Alberta, church services are restricted to 15% occupancy, with mandatory mask use and physical distancing of at least two meters. Speakers can remove their mask while speaking if there is a two-meter distance, but they must put it back on when they are finished. Choir singing and music are permitted, with everyone masked and distanced.

On April 13, Saskatchewan officials announced a return to the 30-person limit on worship services, prompting Bishop Mark Hagemoen of Saskatoon to urge people concerned about the restrictions to contact their government representatives.

“After a brief respite permitting gatherings of 30% of a building’s capacity up to 150, we are again restricted to 30 persons being allowed in the building for worship services, without regard for the size of the building,” the bishop said in a letter to the faithful.

“While we understand the need to address rising numbers in COVID-19 cases in Saskatchewan, and in particular, the increase in the more-dangerous variants of the virus, we are once again frustrated that churches have been singled out for greater restrictions, while other service agencies, businesses, restaurants, bars and retail outlets, etc., are exempt from any additional restrictions,” Bishop Hagemoen said.

However, he added, the diocese would continue to abide by government regulations aimed at reducing the transmission of the coronavirus.

A hard cap of 10 worshippers has been reimposed on Ontario’s places of worship, a blow to churches that in March persuaded the provincial government to allow churches to operate at up to 15% of a building’s capacity.

The Archdiocese of Toronto will not offer in-person Masses under such a small cap.

“Obviously, we are disappointed with the news that we must, once again, significantly restrict attendance at our parishes,” said Neil MacCarthy, director of public relations and communications of the Archdiocese of Toronto. “That said, we are trying to balance that with the reality that there has been a dramatic increase in the number of positive cases in recent days. We are at a critical juncture in trying to flatten the curve and move into a position as soon as possible where we can return in greater numbers to church.”

Wherever possible, the archdiocese is asking parishes to remain open for private prayer and the sacrament of reconciliation and, if desired, proceed with Communion services on Saturday afternoons and evening or Sundays.

The day of Ford’s announcement, Toronto Cardinal Thomas Collins said he recognized “the significant stress and anxiety that many people are feeling given the current situation and the frustration and spiritual pain inflicted by these restrictions over the past year.”

“Be assured of my prayers as we face these challenging days,” the cardinal said. “Please continue to pray for all those who are sick and those caring for them.”

Quebec has imposed different restriction levels. Most major cities — Montreal, Quebec City, Gatineau — are in red zones or red zones with stricter localized sanitary measures, with religious services limited to 25 people. Most semirural regions of the province are considered orange zones: Masses may have a maximum of 100 people; weddings and funerals are limited to 25 people. In all cases, people must remain masked and two meters apart.