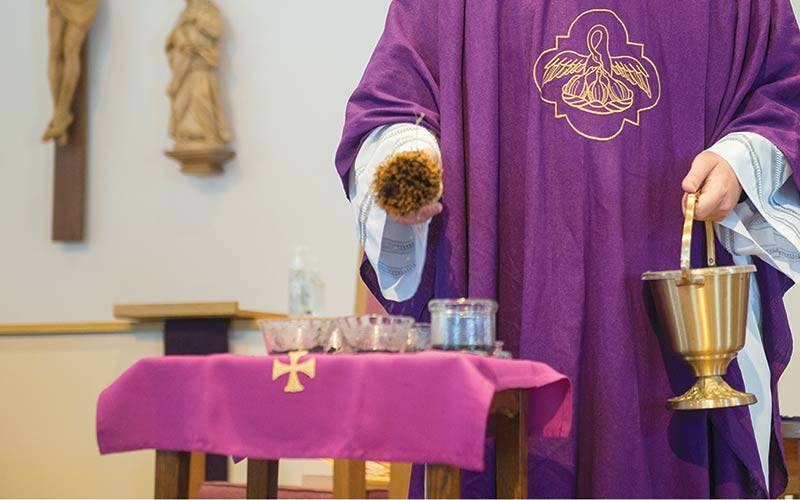 EDITOR’S NOTE: This is the third installment of the Catholic Courier’s new feature series “Why Do Catholics … ?” which aims to answer questions about what Catholics do and believe.

Each year, Catholics around the world mark the start of Lent by receiving blessed ashes on their foreheads. The imposition of ashes on Ash Wednesday is a ritual that has stood the test of time and has its roots in ancient history, remarked Deacon Jonathan Schott, assistant director of campus ministry at St. John Fisher College in Pittsford.

“This has been a somber and pious act that Christians and Catholics have been doing for 1,000-plus years,” Deacon Schott said.

The season of Lent was defined at the Council of Nicaea in 325, but ashes’ significance in church history dates all the way back to the pre-Christian era, he added.

“The church has used ashes for a long time, since the beginning, as sort of an outward sign of humility, penance, mortality,” Deacon Schott said. “In the Old Testament, there are stories everywhere about the use of ashes.”

One of those stories is that of Daniel, who turned to God “in prayer and petition, with fasting, sackcloth and ashes” (Daniel 9:3). Ashes also figure into the Old Testament books of Job and Jonah, noted Charles Hughes Huff, assistant professor of sacred Scripture at St. Bernard’s School of Theology and Ministry in Pittsford. In the Old Testament, ashes are a symbol of mourning, death and penance, Hughes Huff said.

“With penance, the most famous example is the book of Jonah,” Hughes Huff said. “There’s a bit of exaggeration going on in Jonah. When Jonah gives a half-hearted effort at telling the people of Nineveh, ‘Your sins are going to end you,’ they do a public penance by putting sackcloth and ashes on everyone, including the animals.”

In the book of Job, the title character spends time mourning atop an ash heap after his his children have been killed and his livelihood taken away. Hughes Huff noted that in the Old Testament, ashes are connected to great loss, “especially calamity.”

“It’s not always something you would do if your father dies at 94 and he’s had a great life, but it’s more when the city is destroyed or when your job and your whole world are destroyed in a week,” he explained. “When your sin has resulted in calamity and loss, this gets translated to Christian penitence over sin, just a public statement of penance over sin, and eventually this gets associated with Lent and this day of Ash Wednesday.”

Books written in the third and fourth centuries mention the sprinkling of ashes on people’s heads as a public sign of their repentance for sins, Hughes Huff said. It’s unclear, however, exactly when the imposition of ashes was ritualized and designated for a specific day, he noted.

“Some of it is a little bit murky. … The earliest reference to the imposition of ashes that I know about in terms of liturgical practice in the church is in the Gregorian Sacramentary,” he said.

The Gregorian Sacramentary is a 10th-century manuscript that illustrates liturgical practices that likely were taking place a few centuries before the manuscript was created, Hughes Huff said, suggesting that the Lenten imposition of ashes began in the 900s or 800s. The sacramentary also references the dies cinerum — or day of ashes — which is what Ash Wednesday is called in the Roman Missal used today, he added.

The ashes used on Ash Wednesday, which are created by burning the blessed palms from Palm Sunday of the previous year, serve to remind the faithful of their mortality, sinfulness and need for repentance, Hughes Huff said.

“It’s a ritualized form of what’s in the Bible,” he said. “For a rite that’s very symbolic of humility and mortality and suffering and penance over sin, it’s kind of odd that it’s this one that draws people in, but people connect to this,” he said. The rite is “universally embraced by a wide segment of the Catholic world and the mainline Protestant world. It’s one of the few things that people do that they might go to Mass in the morning and have a sign of their faith on their forehead all day.”