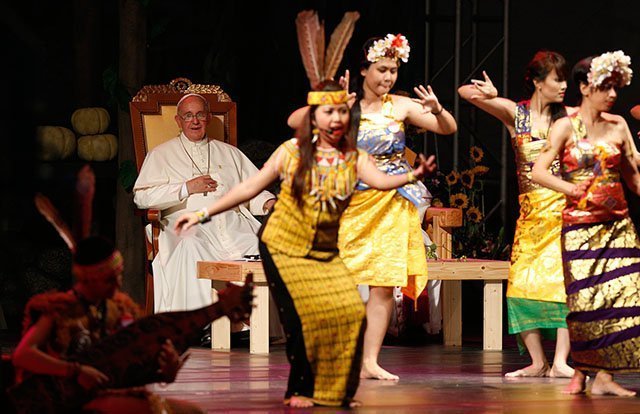 Pope Francis watches as dancers perform during a meeting with Asian youth at the Sanctuary of Solmoe in South Korea Aug. 15.

DANGJIN, South Korea (CNS) — About 6,000 young people from 30 Asian countries had Pope Francis all to themselves for several hours Aug. 15.

The youths said they felt inspired after Pope Francis went off script to answer questions from pre-selected participants, watched a re-enactment of a modern-day prodigal son and also sat down to lunch with a small group at the Asian Youth Day conference in the Daejeon Diocese.

The tent at the Solmoe Holy Ground crackled with music, cheering and the excitement of teens and young adults. Pope Francis said he would stay beyond the allotted time so he could answer young people’s questions.

To wild cheers, the pope asked the young people whether they were ready to be God’s witnesses.

Alexander John of Pakistan told reporters his heart started beating "double time" when he learned he was selected for the sit-down lunch with the pope. The youth minister from the Karachi Archdiocese called the meeting a "dream come true."

Duc Dinh Nguyen, 28, told Catholic News Service that after he arrived in Seoul from Vietnam three years ago to get a degree in biology, he got swept up with how convenient life could be. "It made me (forget) God. I missed him."

"After this event, my faith will be stronger," he said.

After the Q-and-A session, a group of South Korean delegates danced to a pop song composed for the Asian Youth Day conference.

Lauren Kim said she "felt very blessed" when Pope Francis asked for a moment of prayer for the unification of North and South Korea.

"What impressed me the most was he said we have the same language," Kim, a 19-year-old international relations major, told Catholic News Service. "And language has the power (to change the problems) we have in our divided nation. Especially I’m interested in solving those problems. I’m hoping I can use his knowledge and try to expand knowledge from what he told us."

The Aug. 13-17 Asian Youth Day brought together youth leaders from about 30 countries to focus on formation and spiritual life. Solmoe Holy Ground is the birthplace of St. Andrew Kim Taegon, the first Korean priest, who was executed for his faith during a time of persecution of 10,000 Catholics.

St. John Paul II canonized St. Andrew Kim and 102 other martyrs in 1984. The day after meeting the young people, Pope Francis was to beatify 124 martyrs at a Mass in Seoul.