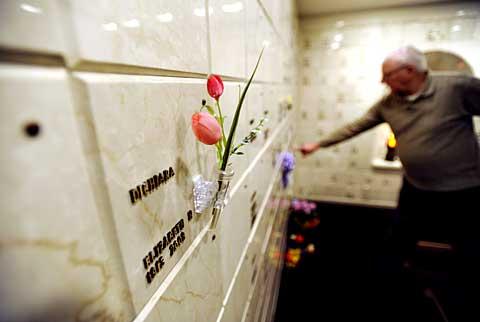 Father Ed Palumbos gives a tour of the columbarium at Fairport's Church of the Assumption April 19.

FAIRPORT — Forged from steel, cast bronze and etched glass, the Tree of Life artwork tucked away in a quiet corner at Church of the Assumption is intended to remind people of the eternal cycle of life.

The nearly 350-pound tree depiction forms a gateway into Assumption’s columbarium, which is the final resting place for the cremated remains of several hundred people. According to Assumption’s pastor, Father Ed Palumbos, the columbarium is a unique feature of the church that has been growing in popularity.

"There is a nice prayerful atmosphere about the place that people find very attractive and helpful," he said.

The columbarium features 485 niches that each are able to hold two urns. About 200 of the niches are still available, and there is room for expansion of the columbarium in the future, Father Palumbos said. More people are choosing interment in the columbarium as cremation gains acceptance among Catholics, the priest noted.

However, as attitudes about the practice changed over the centuries, so did church law, he said.

The Vatican ruled in 1963 that cremation was permissible as long as it is not done to deny resurrection or other Christian doctrine. The Catholic Church prefers that the body be present for a funeral and then be cremated subsequently, according to canon law.

The construction of the columbarium was spearheaded by the parish’s former pastor, Father John Norris, who is interred in it alongside his sister, Kathleen M. Glatz.

"When he designed it, he told the parish, ‘I’m going to be in here one day, and I hope you will join us,’" Father Palumbos said.

Some parishioners have said they appreciate being able to visit the columbarium in all types of weather, since it is open when the church is open, Father Palumbos said. He noted that having a columbarium in a church echoes the traditional practice of having a graveyard around the church.

"The dead are always with us, and the communion of saints unites us with all those who have gone before us in faith," Father Palumbos said. "The columbarium is kind of an extension of that. We have the remains of people right near us."