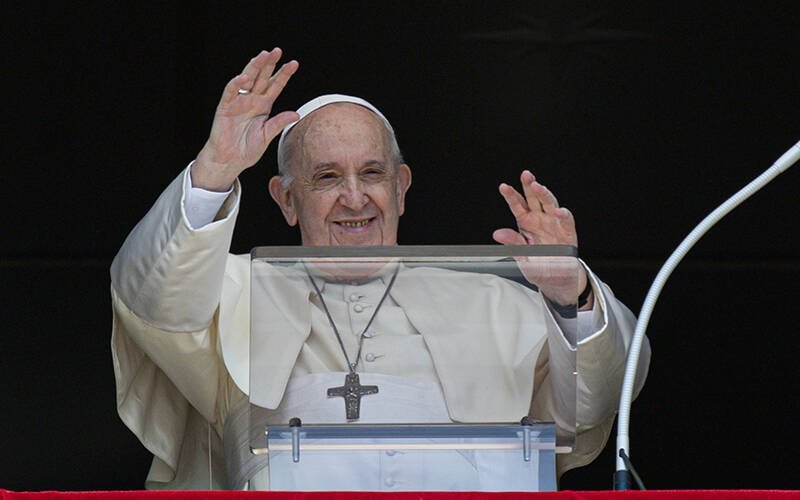 Pope Francis waves as he leads the Angelus from the window of his studio overlooking St. Peter’s Square at the Vatican Sept. 5, 2021. (CNS photo by Vatican Media)

Pope Francis offered prayers to the victims and families affected by Hurricane Ida, which devastated the southern and northeastern United States.

Pope Francis also offered prayers for countless refugees fleeing Afghanistan in the wake of the Taliban’s Aug. 15 takeover of Kabul and expressed his hope that “many countries will welcome and protect those seeking a new life.”

“I assure my prayers for the people of the United States of America who have been hit by a strong hurricane in recent days,” the pope told pilgrims gathered in St. Peter’s Square Sept. 5 during his Sunday Angelus address.

The Category 4 hurricane made landfall Sept. 1, carrying 150-mph winds in Louisiana and knocking out power, water and cellphone service.

“May the Lord receive the souls of the deceased and sustain those suffering from this calamity,” the pope said.

Speaking about Afghanistan, Pope Francis said he prayer “for the internally displaced persons and that they may receive assistance and the necessary protection,” he said. “May young Afghans receive education, an essential good for human development. And may all Afghans, whether at home, in transit, or in host countries, live with dignity, in peace and fraternity with their neighbors.”

Before praying the Angelus , the pope reflected on the Sunday Gospel reading from St. Mark, in which Jesus healed a deaf man with a speech impediment.

The pope reflected on the way in which the man was healed, noting that while Jesus was asked to lay his hand on him, he “put his finger into the man’s ears and touched his tongue with saliva.”

The person’s condition, the pope explained, had “a particularly symbolic value,” especially in touching the man’s ears first.

“We all have ears, but very often we are not able to hear. Why is this?” he asked. “Brothers and sisters, there is an interior deafness that we can ask Jesus to touch and heal today. It is interior deafness, which is worse than physical deafness, because it is the deafness of the heart.”

Christians, he continued, run the risk of not stopping to listen to others, especially “children, young people, the elderly, the many who do not really need words and sermons, but to be heard.”

Priests must also learn to listen “not in a rushed way” and see the best way to help those who seek their counsel, the pope said.

“Starting a dialogue often happens not through words but silence, by not insisting, by patiently beginning anew to listen to others, hearing about their struggles and what they carry inside,” he said. “The healing of the heart begins with listening.”

Pope Francis said it was also important to listen to Jesus as well and repeated his call for Christians to carry a copy of the Gospels in their pocket and to open their ears and their hearts to God.

“We are Christians, but sometimes with the thousands of words we hear every day, we do not find a moment to let a few words of the Gospel resound in us,” the pope said. “Jesus is the Word: If we do not stop to listen to him, he moves on.”