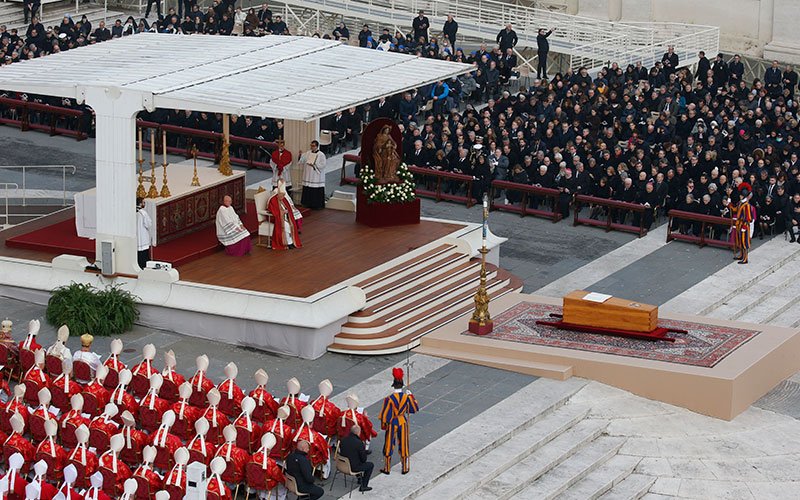 Pallbearers carry the casket of Pope Benedict XVI in St. Peter's Basilica during a procession to St. Peter's Square for the funeral of the late pope at the Vatican Jan. 5, 2023. (CNS photo by Vatican Media) 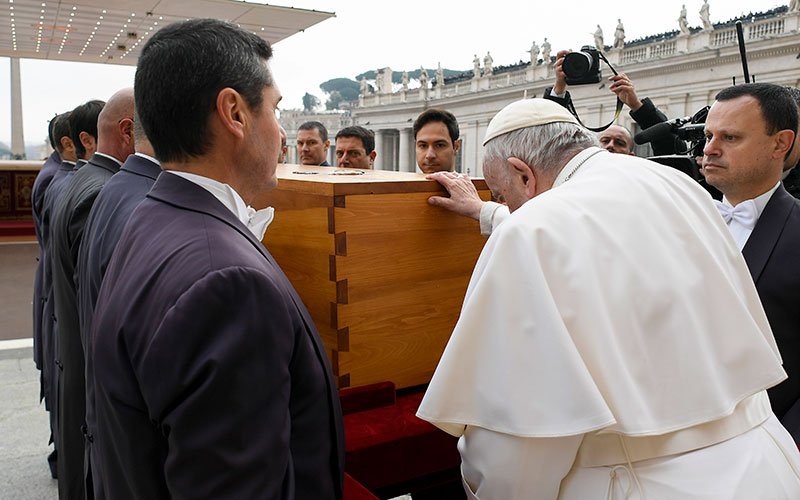 Pope Francis touches the casket of Pope Benedict XVI at the conclusion of his funeral Mass in St. Peter's Square at the Vatican Jan. 5, 2023. (CNS photo by Vatican Media) 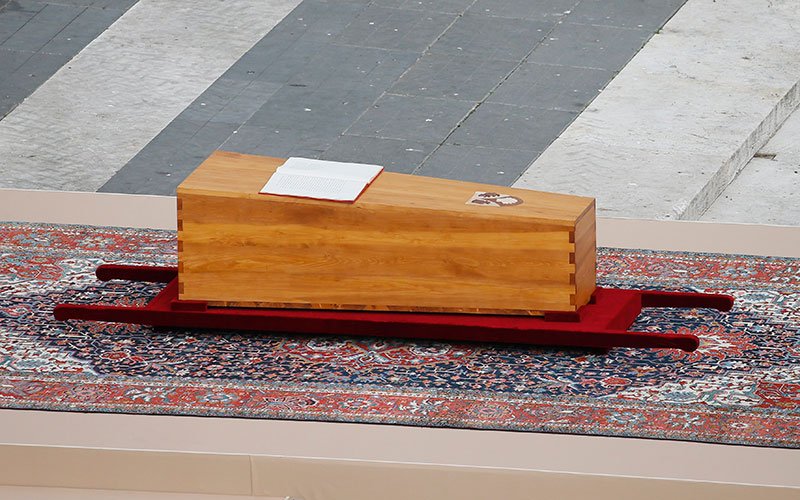 The Book of the Gospels rests on the casket of Pope Benedict XVI during his funeral Mass in St. Peter's Square at the Vatican Jan. 5, 2023. The night before the funeral, when his body was placed in the casket, the Vatican also placed in it a metal tube containing a 1,000-word text, known as a "rogito," summarizing his life and ministry. (CNS photo by Paul Haring) 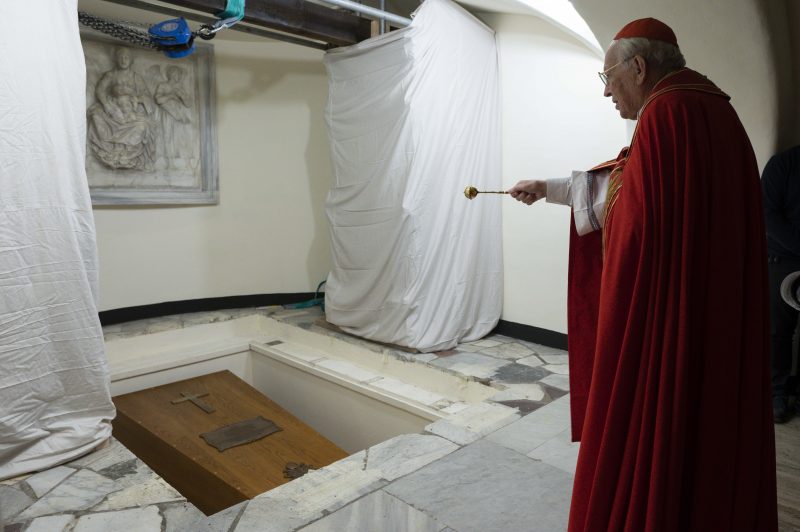 Cardinal Giovanni Battista Re sprinkles holy water on the casket of Pope Benedict XVI during its burial in the crypt of St. Peter's Basilica at the Vatican Jan. 5, 2023. (CNS photo by Vatican Media)

“Like the women at the tomb, we too have come with the fragrance of gratitude and the balm of hope, in order to show him once more the love that is undying. We want to do this with the same wisdom, tenderness and devotion that he bestowed upon us over the years,” Pope Francis said in his homily.

Pope Benedict, who had retired in 2013, had requested his funeral be simple; the only heads of state invited to lead delegations were those of Italy and his native Germany.

However, many dignitaries — including Queen Sofia of Spain and King Philippe of Belgium — and presidents and government ministers representing more than a dozen nations were in attendance, as were most of the ambassadors to the Holy See.

Members of the College of Cardinals sat on one side of the casket, while, on the other side, sat special guests, including the late pope’s closest collaborators and representatives of the Orthodox, Oriental Orthodox, Anglican, Protestant and U.S. evangelical communities. Jewish and Muslim organizations also sent delegations.

Thousands filed the square for the funeral Mass

Pope Francis presided over the Mass and Cardinal Giovanni Battista Re, dean of the College of Cardinals, was the main celebrant at the altar. Some 120 cardinals, another 400 bishops and 3,700 priests concelebrated. More than 1,000 journalists, photographers and camera operators from around the world were accredited to cover the funeral in St. Peter’s Square.

Hong Kong Cardinal Joseph Zen Ze-kiun, who turns 91 Jan. 13, was allowed to leave China to attend the funeral of Pope Benedict, who had made him a cardinal in 2006. The retired cardinal was arrested in May and fined in November together with five others on charges of failing to properly register a now-defunct fund to help anti-government protesters.

More than 1,000 journalists, photographers and camera operators from around the world were accredited to cover the funeral in St. Peter’s Square.

An estimated 50,000 people filled the square for the Mass, and a number of visitors told Catholic News Service that banners and flags were being confiscated by security upon entrance. Of the few flags and banners that did make it past security was a white cloth with “Santo Subito” (“Sainthood Now”) written in red and a “Thank you, Pope Benedict” written in light blue in German.

Just as Pope Benedict dedicated his pontificate to directing the faithful’s focus to the person of Christ, Pope Francis dedicated his homily to Christ’s loving devotion and suffering witness as the “invitation and the program of life that he quietly inspires in us,” rather than on a summary of his predecessor’s life.

Pope Francis spoke of Jesus’ grateful, prayerful and sustained devotion to God’s will and how Jesus’ final words on the cross, “Father, into your hands I commend my spirit,” summed up his entire life, “a ceaseless self-entrustment into the hands of his Father.”

“His were hands of forgiveness and compassion, healing and mercy, anointing and blessing, which led him also to entrust himself into the hands of his brothers and sisters,” he said.

“Father into your hands I commend my spirit,” the pope said, is the plan for life that Jesus quietly invites and inspires people to follow.

However, he said, the path requires sustained and prayerful devotion that is “silently shaped and refined amid the challenges and resistance that every pastor must face in trusting obedience to the Lord’s command to feed his flock.”

“Like the Master, a shepherd bears the burden of interceding and the strain of anointing his people, especially in situations where goodness must struggle to prevail and the dignity of our brothers and sisters is threatened,” said the pope

“The Lord quietly bestows the spirit of meekness that is ready to understand, accept, hope and risk, notwithstanding any misunderstandings that might result. It is the source of an unseen and elusive fruitfulness, born of his knowing the One in whom he has placed his trust,” he said.

“Holding fast to the Lord’s last words and to the witness of his entire life, we too, as an ecclesial community, want to follow in his steps and to commend our brother into the hands of the Father,” he said of Pope Benedict. “May those merciful hands find his lamp alight with the oil of the Gospel that he spread and testified to for his entire life.”

“God’s faithful people, gathered here, now accompany and entrust to him the life of the one who was their pastor,” the pope said. “Together, we want to say, ‘Father, into your hands we commend his spirit.'”

“Benedict, faithful friend of the Bridegroom, may your joy be complete as you hear his voice, now and forever!” he concluded, as the crowd prayed in silence.

Among the people in the crowd was Georg Bruckmaier who traveled nearly 10 hours by car to come to the funeral from his home in Bavaria, not far away from where the late pope was born.

Wearing a Bavarian flag around his back, he told CNS, “There are a lot of Bavarians here today, I’ve seen people I know from university. I wanted to be here for the atmosphere.”

“People felt very close to him, because he is a Bavarian, so this is a really big event to be here,” Bruckmaier said, adding that being able to pay his last respects before the pope’s remains in St. Peter’s Basilica, “is a different thing than seeing it on television. It’s something I won’t forget in my whole life.”

Fiona-Louise Devlin told CNS she and her companions were wearing scarves from the late pope’s visit to Scotland in 2010. She said they traveled to Rome from Scotland specifically for the funeral, booking their flight the day the pope passed away.

“He’s the pope of our generation. Like, how so many people say that John Paul II was their pope, he was mine. I’ve traveled around the world to go to celebrations that he’s been a part of, so I wanted to be here for this,” she said.

As the day began, the thick morning fog obscuring the cupola slowly began to lift as 12 laymen emerged from the basilica carrying the pope’s casket. The crowd applauded as the cypress casket was brought into the square and placed before the altar.

The pope’s master of liturgical ceremonies, Msgr. Diego Giovanni Ravelli, and Archbishop Georg Gänswein, the late pope’s longtime personal secretary, together placed an opened Book of the Gospels on the casket. The simple casket was decorated with his coat of arms as archbishop of Munich and Freising, Germany, which depicts a shell, a Moor and a bear loaded with a pack on his back.

The prayers included petitions for “Pope Emeritus Benedict, who has fallen asleep in the Lord: may the eternal Shepherd receive him into his kingdom of light and peace,” followed by a prayer “for our Holy Father, Pope Francis, and for all the pastors of the church: may they proclaim fearlessly, in word and deed, Christ’s victory over evil and death.”

The other prayers were for justice and peace in the world, for those suffering from poverty and other forms of need, and for those gathered at the funeral.

At the pope’s funeral, like any Catholic funeral, Communion was followed by the “final commendation and farewell,” asking that “Pope Emeritus Benedict” be delivered from death and “may sing God’s praises in the heavenly Jerusalem.”

Pope Francis prayed that God have mercy on his predecessor, who was “a fearless preacher of your word and a faithful minister of the divine mysteries.”

Funeral was based on papal funeral

While the funeral was based on the model of a papal funeral, two key elements normally part of a papal funeral following the farewell prayer were missing: there were no prayers offered by representatives of the Diocese of Rome and of the Eastern Catholic churches, since those prayers are specific to the death of a reigning pope, who is bishop of the Diocese of Rome and is in communion with the leaders of the Eastern-rite churches.

A bell tolled solemnly and the assembly applauded for several minutes — with some chanting “Benedetto” — as the pallbearers carried the casket toward St. Peter’s Basilica.

Pope Francis blessed the casket and laid his right hand on it in prayer, then bowed slightly in reverence before it was taken inside for a private burial in the grotto of St. Peter’s Basilica, in the same tomb that held the remains of St. Pope John Paul II before his beatification.

The evening before the funeral Mass a small assembly of cardinals, officials of St. Peter’s Basilica and members of the late pope’s household gathered in St. Peter’s Basilica to witness Pope Benedict’s body being placed into a cypress casket and closed. The ceremony took place Jan. 4 after about 195,000 people had paid their respects to the pope over three days of public viewing.

The “rogito,” a document rolled up and placed in a tube, was placed in the casket with the body. In addition to containing his biography, the legal document, written in Latin, also attested to his death and burial. Medals and coins minted during his pontificate also were placed in the casket.

Archbishop Gänswein and Msgr. Ravelli extended a white silk cloth over the deceased pope’s face. The pope was wearing a miter and the chasuble he wore for Mass at World Youth Day in Sydney in 2008; between his clasped hands were a rosary and small crucifix.

After the funeral Mass, the pope’s casket was taken to the chapel in the crypt of St. Peter’s Basilica where he was to be buried.

Although the burial was private, images supplied by Vatican Media showed Cardinal Re leading prayers and blessing the remains during the burial rite attended by a small number of senior cardinals, the retired pope’s closest aides and others.

The cypress casket was wrapped with red ribbon, which was affixed to the wood with red wax seals, then placed inside a zinc casket soldered shut and put inside a larger casket made of oak. The tops of both the zinc and oak caskets were decorated with a simple cross, a bronze plaque with the pope’s name and dates of birth, papacy and death, and his papal coat of arms.

The burial ceremony ended before 1 p.m. but Matteo Bruni, director of the Vatican press office, said he thought the crypt would not be open to the public until Jan. 8.

Contributing to this story was Justin McLellan at the Vatican.