At Mass for racial justice, healing, Catholics asked to see Christ in others - Catholic Courier 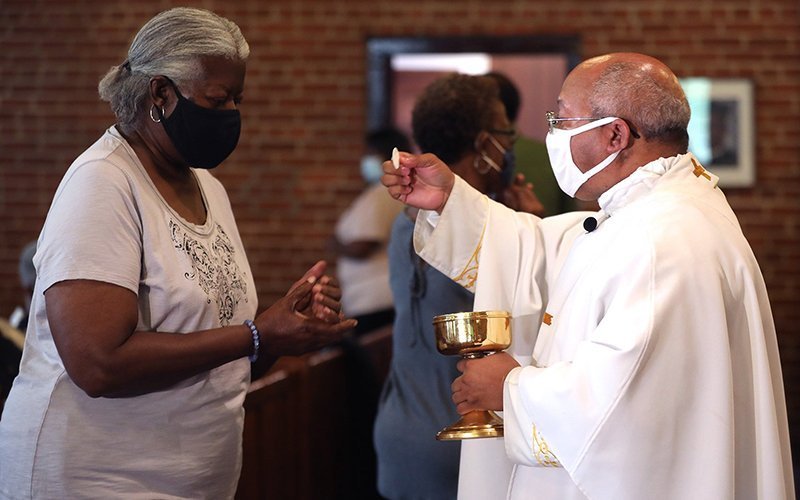 Father Scott Woods, pastor of St. Peter Claver Parish in St. Inigoes, Md., distributes Communion to a woman Sept. 9, 2020, during the Mass to celebrate the feast day of the parish's patron saint and to pray for an end to racism. (CNS photo by Andrew Biraj/Catholic Standard)

ST. INIGOES, Md. (CNS) — Marking the Sept. 9 feast day of St. Peter Claver with a Mass at a historically Black Catholic church in southern Maryland, Washington Archbishop Wilton D. Gregory urged Catholics to recognize reflections of Christ in others, just as that saint saw Christ in the enslaved Africans he served.

“Is that not the challenge that we face today as Catholics, caught up in this very volatile social moment?” Archbishop Gregory asked during the noon Mass at St. Peter Claver Church in St. Inigoes.

“Like Peter Claver, are we not called to see Christ in every face and to hear him in every voice,” he said, “no matter what race or ethnic backgrounds those faces and voices may represent?”

St. Peter Claver Church was established in the early 1900s, after Black parishioners experienced racism from white Catholics at a nearby church.

The Mass was part of a nationwide Day of Fasting and Prayer called for by the U.S. Conference of Catholic Bishops to acknowledge the sin of racism and to seek racial justice and healing. The call came in the wake of altercations between white police officers and Black men over the past several months that have resulted in shooting deaths or injuries and have sparked protests — and in some cases riots — in several cities.

In the Diocese of Fort Wayne-South Bend Sept. 9, Bishop Kevin C. Rhoades addressed the topic of racism with a prayer service aimed at young people. The service took place Sept. 9 at Bishop Luers High School in Fort Wayne and was livestreamed to other Catholic schools in the diocese.

Prior to organizing it, Bishop Rhoades met with the diocesan Black Catholic Advisory Board to receive members’ insights concerning racial justice and the church’s responsibility to combat racism. Deacon Mel Tardy, chairman of the board, joined Bishop Rhoades at the high school for the prayer.

The dignity of each human person was woven throughout the service. The chosen reading was from 1 Corinthians 12, which speaks of each member of the church as part of the body of Christ, all dependent on each other to make up the whole.

“In solidarity, we are called to share the suffering of our brothers and sisters in Christ who have been wounded by the evil of racism,” Bishop Rhoades said. “Their wounds are the wounds of the whole church. If any member of the body of Christ is suffering, whether they’re white, Black or brown, we are all responsible for that member.”

In the Diocese of Brooklyn, New York, an evening Mass for racial justice was celebrated at the Co-Cathedral of St. Joseph to encourage “communication and dialogue within parish communities” throughout the diocese “as a response to racism.”

In Maryland, Archbishop Gregory told the congregation in St. Inigoes: “As we raise these important questions in our lives at this moment in time, let us focus on the issues that really matter,” during his homily.

The day’s readings — in which the prophet Isaiah equates fasting with breaking the chains of the enslaved and Jesus tells his disciples that when they feed the hungry and visit the prisoner, they are ministering to him — are filled with “life-saving warnings” from God, the archbishop said.

Archbishop Gregory said Isaiah’s warning “is particularly appropriate for this moment in our nation’s struggle for racial harmony and justice because it focuses our attention on our own hearts and actions, rather than mere symbols, as important as symbols may be. The Gospel message from Matthew encourages us to see with the eyes of Christ and to be saved.”

The archbishop said the call to see Christ in others is the same warning found in the Gospel of Matthew, “as we confront and pledge ourselves to overcome any racist attitudes within our own hearts and lives. Matthew had Jesus offering to his disciples and pointedly, therefore, to all of us, of the dangers of hatred, neglect, and hard-heartedness for others.”

It was a doorman at a Jesuit university in Mallorca, Spain, Archbishop Gregory told congregants, who taught St. Peter Claver how to see with the eyes of Christ. The wisdom and humility of the porter, St. Alphonso Rodriguez, changed the path of Claver’s life forever, he said.

St. Peter Claver was born into a privileged family in 15th-century Catalonia, a region in Spain, and many assumed he was intended for great things in the church. When he met Rodriguez, however, the young Jesuit’s vision of the world changed completely, and he was prompted to volunteer to minister to Africans in slavery.

St. Peter Claver ministered to Africans when the boats carrying them arrived in Cartagena, Colombia, and followed them to the plantations where they would be forced to work.

“Peter Claver was a missionary with a dynamic mission,” Archbishop Gregory said. “It seems to me that it was such a clear focus that allowed Peter to rush to the harbor of Cartagena to greet thousands upon thousands of people, not as human cargo, but as brothers and sisters.”

For 40 years, the Spanish Jesuit offered enslaved people food and medicine and tended to the sick and dying. He pleaded with plantation owners to treat their workers humanely. St. Peter Claver also instructed Africans in the Catholic faith, ministered the sacraments to them and baptized an estimated 300,000 people.

When St. Peter Claver died, the people of Cartagena came in great numbers to the Jesuit convent where he lived for the wake, and took little bits of his cassock. His body was dressed in three different cassocks, since people kept taking scraps as mementos of his holy life.

“May we find a memento of Peter Claver that we take home to our families and to live the life of faith that he did so perfectly,” he said.

At the end of the Mass, Archbishop Gregory read a prayer that he and Washington Auxiliary Bishops Mario E. Dorsonville, Roy E. Campbell Jr. and Michael W. Fisher wrote. The archbishop encouraged Catholics to say the prayer “with a heart intent on healing our nation and bringing peace and harmony to our communities and families.”

Titled “Our Family Prayer for Justice and Human Dignity,” it asks God to help Americans battle against the country’s “original sin” of racism that continues to divide the body of Christ.

The prayer also asks God to “bless parents that they may form their children in faith, to love one another regardless of skin color, ethnicity and national origin, just as Jesus loves us.”

Seeking Mary’s intercession to help archdiocesan Catholics “continue to witness to the Gospel message of life and dignity of all people,” the prayer also asks God to “give us the courage, compassion, and perseverance to root out any form of injustice within our communities and to bring the healing love of Christ to all in need.”