At rally and Mass for Life, young people urged to witness for life - Catholic Courier 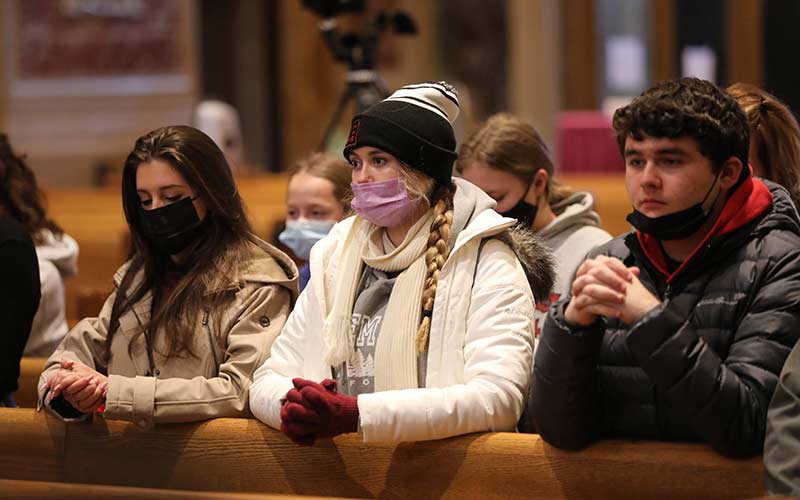 Young people pray during the annual Mass for Life sponsored by the Washington Archdiocese at the Cathedral of St. Matthew the Apostle in Washington Jan. 21, 2022. (CNS photo by Gaillard Stohlman/Archdiocese of Washington)

Catholics urged to pray, work for day when every life is protected in law

WASHINGTON (CNS) — Teens and young adults from the Archdiocese of Washington and a few other places faced frigid early morning temperatures to gather at the Cathedral of St. Matthew the Apostle to pray, sing and voice their support for life.

Several hundred young people attended the archdiocesan-sponsored 33rd Youth Rally and Mass for Life Jan. 21 that occurred prior to the annual March for Life in the nation’s capital.

Because of the continuing pandemic, the rally and Mass had limited seating and offered a scaled-down version of previous gatherings for the second year in a row.

“It is a special joy to welcome each of you, the youth of our archdiocese … (and) all those joining us via livestream from all across the country,” Washington Cardinal Wilton D. Gregory said as event started.

Noting that it is God alone “who has the power to grant the breath of life,” the cardinal prayed that “we stay constant in safeguarding the dignity of every human life.”

Cardinal Gregory was the principal celebrant at the Mass and Father James Morrison, parochial vicar at Our Lady of Lourdes Parish in Bethesda, Maryland, was the homilist. Concelebrants included Washington Auxiliary Bishops Mario E. Dorsonville and Roy E. Campbell Jr.; Archbishop Christophe Pierre, apostolic nuncio to the United States; and about a dozen priests.

Archbishop Pierre read a message from Cardinal Pietro Parolin, Vatican secretary of state, that was issued in the name of Pope Francis prior to the Mass.

“His Holiness is grateful for this outstanding public witness to the sacred value of every human life” and reminded those at the rally that “only when the dignity of the human person is respected … can the many forms of social injustice be overcome,” Cardinal Parolin’s message said.

In his homily, Father Morrison reminded those at the Mass that as they march, they were “chosen to be the ones to reveal his (God’s) glory, to be a light to illuminate the darkness. Since 1973, our nation has been able to murder 63 million children. That is a lot of darkness.”

Father Morrison urged the young pro-lifers to march for life and fight against abortion with love.

“God’s light, God’s love is shining through us. We are that light when we love like God,” he said. “In defending the dignity of the unborn, we do so with love.”

Father Morrison added that “we might not make friends being pro-life,” but those who support abortion must know that they are loved. “We love others with that same radical love we learned from Christ,” he said.

Quoting Jesus’ words from Matthew 18:14 — “It is not the will of my heavenly father that one of these little ones should be lost” — Father Morrison said abortion providers, women facing crisis pregnancies, homeless people and those often considered “different” are “these little ones whose God’s love embraces.”

“We set out in the darkness with the best news in the world, and that is ‘God loves you.’ That is the easiest thing to say and the hardest thing to believe,” the priest said. “Every person you meet should hear this today.”

The annual Rally and Mass for Life is held each year in conjunction with the national March for Life, which marks the anniversary of the 1973 Supreme Court’s Roe v. Wade and Doe v. Bolton decisions that legalized abortion in all 50 states.

Since 1990, the Washington Archdiocese has hosted the event the morning of the march to give young people an opportunity to worship together, learn about Catholic teaching on life issues and stand firm in their support of life.

Traditionally, the archdiocese hosts the event at a larger venue and invites youth and parish groups from throughout the U.S. to attend. In past years nearly 10,000 people attended. This year pre-assigned seating was open largely to local youth. A limited number of attendees from Texas and Ohio and archdiocesan seminarians also attended.

This year’s event, like last year’s, was streamed over several social network platforms. It included a recitation of the rosary, talks, musical performances and reflections.

The main speaker at the rally, Josh Brahm, president of Equal Rights Institute, a national organization that trains pro-life advocates, told attendees he believed the Supreme Court would overturn its decades-old abortion decisions later this year.

The court Dec. 1 heard oral arguments in a case on Mississippi’s ban on most abortions after 15 weeks of pregnancy. A ruling allowing Mississippi’s law to go forward could lay the groundwork for abortion restrictions in other states.

“This is a cool year to march,” Brahm said.

He noted that “pro-choice people are scared, they are angry” because of the very real challenge to legal abortion. He also encouraged pro-lifers to civilly engage those who support abortion to “bring down walls and make them more receptive and less defensive.”

He called on the young people at the rally to “make a great impact for life in your sphere of influence this year.”

At the end of the Mass, Cardinal Gregory encouraged the young adults at Mass to consider a religious vocation or a vocation to the priesthood, because “the church is greatly in need of thoughtful, happy, zealous young men and women.” He also acknowledged the seminarians present.

“These are wonderful days to witness to life and to take hope in tomorrow,” he concluded. “May that be the blessing that all of us take from this Eucharist.”