At Unity Walk, people of all faiths learn about one another - Catholic Courier 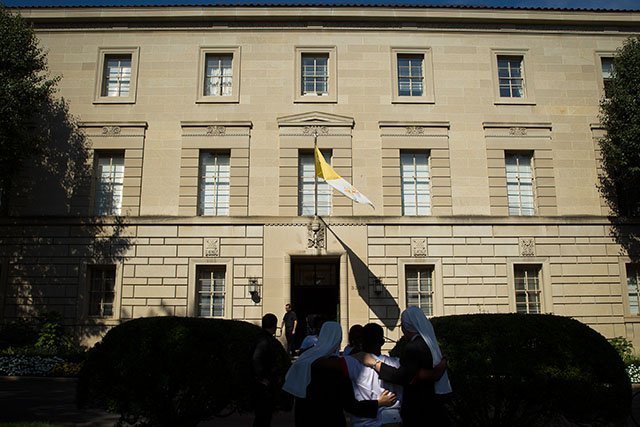 A Unity Walk participant takes a photo with nuns outside the Vatican Embassy, or apostolic nunciature, in Washington Sept. 21. Ceremonies began with a call to prayer at the Washington Hebrew Congregation and proceeded to every house of worship along Embassy Row.

WASHINGTON (CNS) — Violence against religious groups seems to be at an all-time high around the world, but an annual event in Washington brings people from all faiths together for a day of learning about one another, sharing their beliefs and culture, and working side by side on service projects.

It’s called Unity Walk, which has taken place since 2005.

This year’s event brought together 1,200 people Sept. 21 for a day that began with a Muslim call to prayer in the city’s largest synagogue, Washington Hebrew Congregation, and was followed by a walk down Embassy Row, where every house of worship opened its doors to visitors.

The Vatican Embassy, or apostolic nunciature, was among the 11 sites that welcomed walkers.

Service projects included packaging potatoes and meals for hungry people and putting together bags of trail mix for the homeless. An information table was set up displaying banners for various faiths, and cultural events at the different stops included various forms of music and ethnic dancing.

"When you think of people around the world and the religious hatred and ignorance and violence (that takes place) often in the name of religion, this is nice here in Washington to experience 1,000 people of all different faiths who care about each and want to learn about each other," said Kyle Poole, a main organizer of Unity Walk.

He said between 50 and 75 volunteers help out for the day.

Poole remarked that the election of Pope Francis also has given a bounce to participation in the last couple of years.

The concept for the Unity Walk came out of his involvement with a Habitat for Humanity project that invited faith leaders to build a house together, with many of them doing the construction work wearing their traditional garb, he said.

"In 2005 there was a call for different service projects" for religious groups and out of that came the idea for the walk, Poole told Catholic News Service in a telephone interview Sept. 22.

Unity Walk "is completely apolitical — no signs banners or placards," he said. "All put aside their differences to learn about the other and care about the other.

"It is certainly not to put aside your own faith but to be big enough to open up doors to others," he said. "That simple equation has struck a note because of the world situation."

People who live near Embassy Row also participate. Many of them have never been to the mosque in their own neighborhood, Poole said.

"I’m just Presbyterian from North Carolina who had an idea," he told CNS, "and the idea struck a nerve and it is timely … really a statement of what’s possible from Washington, D.C., and a lesson — oddly enough from Washington — to the rest of world that you can, without compromising your own faith, reach out to others in friendship.

Msgr. John Maksymowicz, secretary at the apostolic nunciature, told The Washington Post that Pope Francis has been an inspiration for those participating in Unity Walk, with his talk about helping the poor and his support of interfaith relations.

The pope says "we have to walk together. We have to also be true to what we believe," said the priest, adding that the Washington gathering may not be a major happening but he told the Post that "if you plant seeds" of brotherhood and sisterhood, "there has to be fruit down the road."