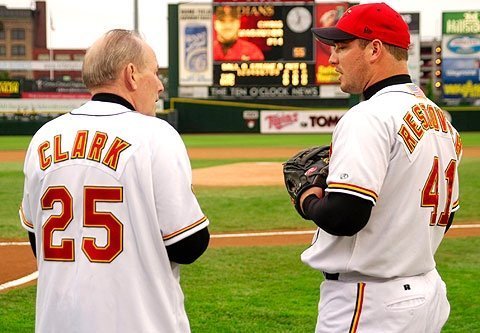 Whether enjoying a New York Yankees game or doing a vigorous workout, Bishop Matthew H. Clark has long made sports and fitness a priority.

His love for athletics extends back to childhood, when he’d regularly join in neighborhood games in the Crow Hill area of Waterford, N.Y., just north of Albany.

"I grew up with a lot of boys and girls, and we just played all day long. We would have pickup games — baseball, softball, basketball — and other kinds of games like hide-and-seek and tag," Bishop Clark recalled. Although some local organized leagues existed, "it was not the uber-organization that kids have today all year long. Ninety percent of it was just pickup games on summer afternoons. It was just the way we lived — we got together and played," he said.

Bishop Clark remained active in sports through his high-school and seminary years, playing basketball, football and baseball, and eventually taking up handball as well. But early in college, he made what he now calls "a very bad decision": He began smoking. It was a habit that lasted some 20 years, and he said his participation in athletics was "at a pretty low level" for about half that period.

However, fitness also ended up helping him to kick the habit.

"May 11, 1975 — that’s the date I finally managed to stop smoking. Starting that day, I haven’t smoked since," Bishop Clark said, recalling that he took his final cigarette on the way into a dining room at North American College in Rome. "It was the last cigarette in my pack and the last pack in a carton I had recently purchased. I announced, ‘That’s the last cigarette I’m ever going to smoke,’ then went and prayed a half hour — ‘Lord, let this really be the last time.’ And then I ran a couple of laps. After 20 years of smoking, you don’t go too far too fast."

Yet his brief jog wasn’t a one-shot deal. Instead, the distances became longer and much more frequent: "The more I ran, the more I could forget about smoking," he remarked.

After assuming duties as Bishop of Rochester in 1979, Bishop Clark became a familiar face on Rochester’s streets with his jogging regimen and participation in road races. That practice continued for two decades until cardiac issues in 1998 forced him to cut back; a hip replacement in 2008 brought further training adjustments. He now rides a stationary bike and said he’s been "pretty consistent" with maintaining workouts.

As far as spectator sports go, Bishop Clark enjoys attending Rochester Red Wings baseball games and Buffalo Bills football contests. His first favorite baseball team was the St. Louis Cardinals, and he clearly remembers their 1946 World Series title win behind his hero, Baseball Hall of Famer Stan Musial, whom he described as "a fabulous player, one of the greatest of all time."

Bishop Clark’s allegiance eventually shifted to the Yankees, whereas he said his father, M. Harvey Clark, was a New York Mets fan "from the first day the Mets were formed" (in 1962).

The bishop said he tracks Yankees results daily, and that he was able to attend a game in Atlanta during the annual U.S. Conference of Catholic Bishops gathering in mid-June because his beloved Bronx Bombers happened to be in town that same week. Bishop Clark noted with satisfaction that the Yankees won that contest as part of a 10-game winning streak.