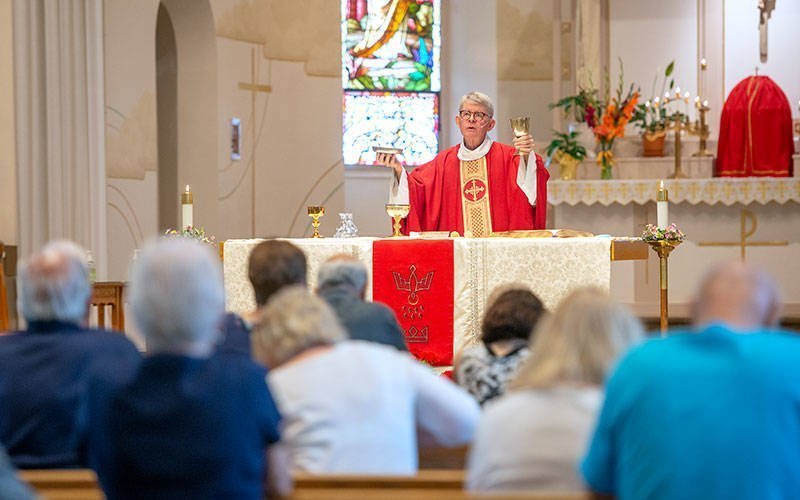 Sunday Mass obligation in Rochester Diocese to resume in June

“Like the spring flowers, you’re starting to bloom in church,” Father Timothy Horan wrote in his April 24-25 bulletin column for Holy Trinity Parish, where he serves as pastor.

Indeed, according to statistics provided by Father Horan and the diocesan Department of Pastoral Services, Sunday-Mass attendance at the Webster church increased from an average of 499 this March to 653 for the weekend of May 8-9 — a jump of approximately 30 percent.

A similar blossoming of in-person worship has taken place throughout the Diocese of Rochester. Buoyed by a rising rate of vaccination against the novel coronavirus along with a steadily decreasing statewide COVID-19 infection rate, combined attendance rose from 15,959 per weekend in January to an average of 26,116 for the first two weekends of May.

Attendance figures stand to increase even more with the May 23 joint announcement by Bishop Salvatore R. Matano and the bishops of Albany, Buffalo and Syracuse that dispensation from the Sunday-Mass obligation — in place since the spring of 2020 — is being lifted the weekend of June 5-6.

This development comes on the heels of modifications that began in late May for those attending Mass. As of press time on May 28, they include — according to parish bulletins and websites — reopening some pews that had been closed off and designating sections in church for people who are social distancing and for those who are not. Further adjustments seem likely in coming weeks, and the Catholic Courier will provide updated information on its website, CatholicCourier.com, as these are announced.

However, early May attendance at Sunday Masses across the Rochester Diocese represented only about 61 percent of the 42,933 attendance average reported by the pastoral-services department for the first two months of 2020 — just before the pandemic took hold, suspending all in-person worship for next three months.

Father Peter Van Lieshout said he’s pleased that weekend attendance at St. Peter Parish in Ontario County, where he is pastor, has risen to roughly 80 percent of pre-COVID levels. Still, he acknowledged that a certain portion of his flock remains hesitant to step back inside a church just yet out of health concerns.

“We have great parishioners who are still very cautious,” he said, remarking that it’s been a tricky balance to encourage parishioners to be present again for the Mass and Eucharist while not pushing them outside their comfort zones. “I’m constantly walking the line,” he said.

According to statistics provided by the office of Gov. Andrew Cuomo, the statewide positivity rate from COVID-19 testing had declined for 51 consecutive days as of May 26, by about which point nearly 56 percent of the state’s population over age 18 had been fully vaccinated. Father Van Lieshout said that this increased vaccination rate has factored significantly into what he called a “remarkable” rise in attendance at his parish.

Similarly encouraging trends are being noted around the diocese. For instance, average weekend attendance at Blessed Trinity/St. Patrick parishes in Tioga County rose nearly 50 percent between January and early May. Meanwhile, such parishes as St. Charles Borromeo in Greece and Most Holy Name of Jesus in Elmira recently restored temporarily suspended Masses to their weekend schedules to accommodate growing numbers.

Father Augustine Chumo, pastor of Ithaca’s Immaculate Conception Parish, noted that 75 percent of his pre-pandemic Sunday attendance has been restored and that the 12:10 p.m. weekday Mass has averaged nearly 100 worshipers in recent weeks. A key factor in parishioners returning, he said, has been an emphasis on publicizing efforts of cleaning crews to keep the church properly sanitized against COVID-19 infection.

“When people see that commitment, they feel more comfortable to come back to church,” he said.

Sanitizing, mask-wearing and social distancing likewise appear to have paid off elsewhere. According to diocesan officials, no coronavirus outbreaks occurred during the pandemic at any parish due to attending Mass or other religious activities.

Beginning in late May, some of those safety measures have been relaxed in accordance with new state-issued guidance, mirroring trends for public gatherings in such other parts of society as workplaces, restaurants and entertainment venues. And, as of June 5-6 — the Solemnity of the Most Holy Body and Blood of Christ, also known as Corpus Christi Sunday — diocesan Catholics who are not at enhanced risk from COVID, sick, or caring for others who are at risk or sick, will again be obligated to attend Sunday Mass for the first time in nearly 15 months. In-person Mass attendance was originally suspended in mid-March of 2020 due to the pandemic’s arrival in this diocese; gradual reopenings began last June.

Father Horan acknowledged that weekend church attendance can be expected to rise now that the dispensation is ending: “(I) can’t wait to see everybody,” he remarked. Yet he said some parishioners who have opted to view the Mass via livestream over the past several months have been understandably hesitant about joining a crowd in an indoor setting.

“I haven’t scolded them, I haven’t lectured them as to the importance of coming to church. I have simply said we’re doing everything we can here to make it safe and welcoming,” Father Horan said.

On the other hand, Father Van Lieshout expressed concern about the potential difference between legitimate health concerns that inspired the diocesan dispensation and a lack of fervor surrounding Mass attendance.

“If it’s about still being nervous (of infection), I can deal with that. But if it’s like, ‘I don’t need (in-person Mass) anymore,’ it would be like a knife in my heart,” Father Van Lieshout said, adding that he has endeavored to convey to parishioners that there may be health risks in attending church “but also spiritual dangers” if they don’t.

Father Chumo said he hopes people who remain reluctant to return to church will take into account the ongoing safety measures enforced at Immaculate Conception and other parishes, as well as the ever-diminishing risk of contracting COVID-19 in the wider community.

“I think to be kind of driven by fear is not good,” he remarked, adding that Catholics need to honestly weigh whether they’re equally fearful of going out in public to other venues. For instance, he said, “You see all these people going to the gym.”

Then again, Father Horan said he’s not sure that a lack of interest underlies some Catholics’ reluctance to return to Mass. Rather, he said, they might simply be struggling to shed routines that arose from more than a year of lockdown restrictions in churches and other parts of society.

“I don’t think it’s a theological issue they’re wrestling with. It’s a matter of habit that has come upon them, not a lack of faith in God or desire to follow Christ,” Father Horan said. “How will that be broken? By a hunger that’s not being satisfied, by coming and receiving the Eucharist.”