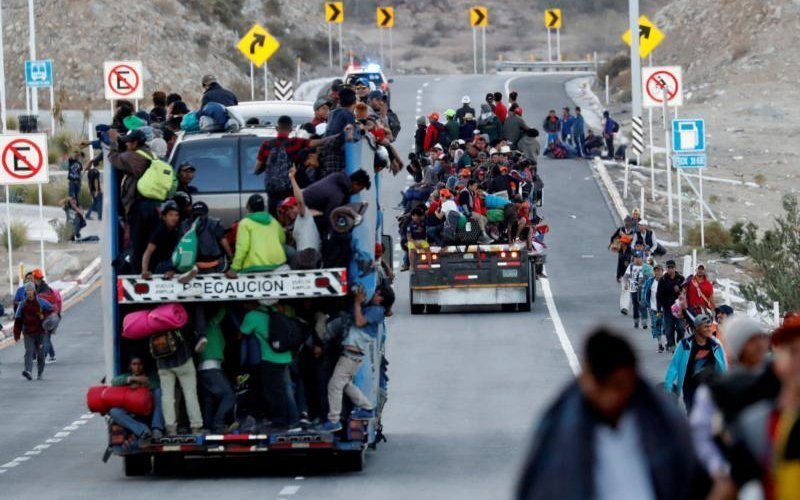 Migrants from Central America, part of the migrant caravan traveling to the U.S., ride in trucks Nov. 20 in Mexicali, Mexico. (CNS photo by Kim Kyung-Hoon/Reuters)

In December 2018 I went with a small volunteer team of local attorneys and interpreters to Karnes City, Texas, to assist immigrants applying for asylum. We worked at a residential center that houses about 630 men and their sons.

Since I speak some Spanish, I could understand and speak with, on a limited basis, the men we interviewed. I also worked with a bilingual social worker during meetings with the men, who came primarily from Guatemala and Honduras.

We had detailed conversations about why they left their home countries and how they could meet the criteria for credible fear. Sometimes concerns about an older son were the reason for leaving home. For example, one 15-year-old boy was kidnapped off the street for gang recruitment and held for 24 hours before being released to his father with a warning that the family needed to leave the area immediately or be killed.

We explained the asylum process and helped applicants organize their stories for their credible fear interviews, so that time would not be wasted on extraneous information. It became clear that gang/thug violence terrorizes their home communities and the local police do almost nothing about it.

I never once doubted these men’s veracity because each story was full of specific and profuse details, told in a near rambling stream of consciousness. It appeared that, until my partner and I met with them, these fathers had never given a thought to how to organize their stories. They just wanted out of their alarming and violent situations at home and believed they could find some safety in the U.S.

None of these men presented as the criminal/rapist/terrorist illegals portrayed by the anti-immigration crowd. Furthermore, no wall will stop asylum seekers because our law, and international law, establishes the right to seek asylum.