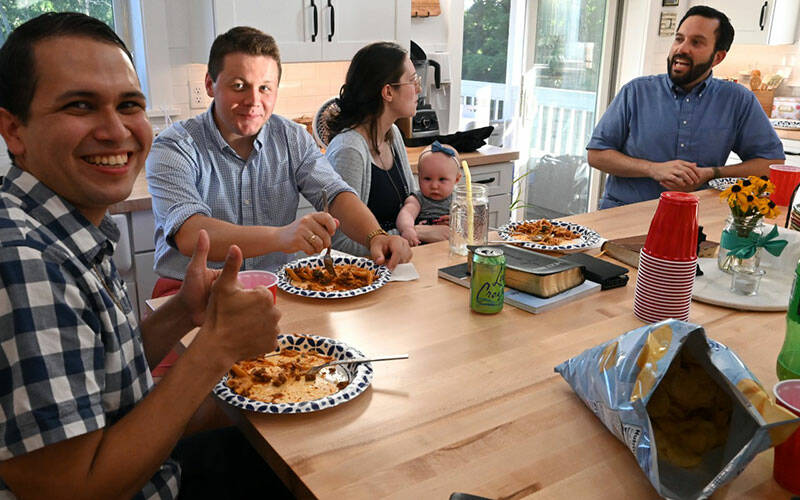 In July 2019, a handful of people showed up for the first meeting of a new Bible-study group for young adults in the Auburn area. Three years later, the small group has evolved into a close-knit faith-sharing community, shepherded along the way by three young adults committed to sharing the spiritual nourishment they’ve received.

“It’s actually a beautiful story of … how God works through others, and the essence and nature of community and how it impacts a soul,” remarked Grace Fallon, the group’s founder.

Fallon grew up in a Catholic family, yet it wasn’t until her undergraduate years at Franciscan University of Steubenville in Ohio that her faith truly “came alive,” she said. There, Fallon was surrounded by people who loved Christ and were not afraid to let their faith influence every part of their lives. She joined a Bible-study group organized by a young couple who modeled hospitality, joy and love of God.

After graduating in May 2019, Fallon returned home to Auburn and soon began to miss the vibrant, active community of Catholic young adults she’d left in Steubenville. Rather than bemoaning the lack of opportunity for local young adults, however, Fallon decided to try her hand at organizing the type of community she’d been missing.

“If I had been given and had received so much while I was a member of the group at Franciscan, why could I not give that same vibrancy here in Auburn?” she explained.

Fallon spread the word among her peers, and when the date of the new group’s first meeting finally arrived, she waited nervously for people to arrive at her parents’ house. When the meeting time came and no cars had pulled into the driveway, Fallon was disappointed but tried to salvage the evening by heading out to play soccer with her siblings. She’d only been gone a few minutes when she got a phone call from her mom, who told her to hurry back to the house because her guests had arrived.

“I was so surprised at the number of people that came, ready to dive into Scripture. I thought the first session was a no-show, but by the end my heart was burning with that zeal and excitement for Christ that I had experienced at Franciscan,” Fallon said.

The group grew as the weeks went by. Members read passages from both the Old Testament and the New Testament, discussing what they’d read as well as everything from the various ecumenical councils in church history to the challenges of living out the Catholic faith in the workplace.

The task of leading the group was daunting at times, but Fallon tried to remember that God was the group’s true host.

“It was his word we were discussing, not mine, and when I handed it over to him, the session ended up being a beautiful discussion where we truly encountered Christ and walked away differently,” she said.

When the COVID-19 pandemic disrupted life in the spring of 2020, the group members began meeting virtually, and one member later told Fallon the meetings had been a source of hope during those dark days. The group members had resumed meeting in person by the fall of 2020, when Kieran and Laura McManus visited Auburn. They were looking for a home to buy, as Laura McManus had just accepted a job on the faculty at Tyburn Academy of Mary Immaculate, a private Catholic high school in Auburn, and were invited to a Bible-study session.

“We took a chance and showed up, and were met with such warmth, welcome and the spirit of Christ,” Kieran McManus said.

“We found a home in this Bible-study community before my husband and I had even bought and moved into our home,” Laura McManus added. “The joy of the Holy Spirit was tangible there, inspiring people and inspiring conversation.”

When Fallon announced earlier this year that she would be moving away, the McManuses stepped up as the group’s new facilitators. They now host meetings at their home every Thursday evening at 7, preceded by informal pasta suppers at 6:30 p.m.

“I feel like now it is our turn to provide that sense of community to others, since we have been so blessed by it,” Kieran McManus said.

“It is our hope that everyone who attends feels welcomed, cherished and that they truly belong,” Laura McManus added.

Originally founded for young adults, the group has since expanded to also welcome people outside of that age range. Opening up the group in this way has enriched the experience for all, as younger members learn from the wisdom and experience of their older counterparts, while the older members are “enlivened and encouraged” by younger members, Fallon said.