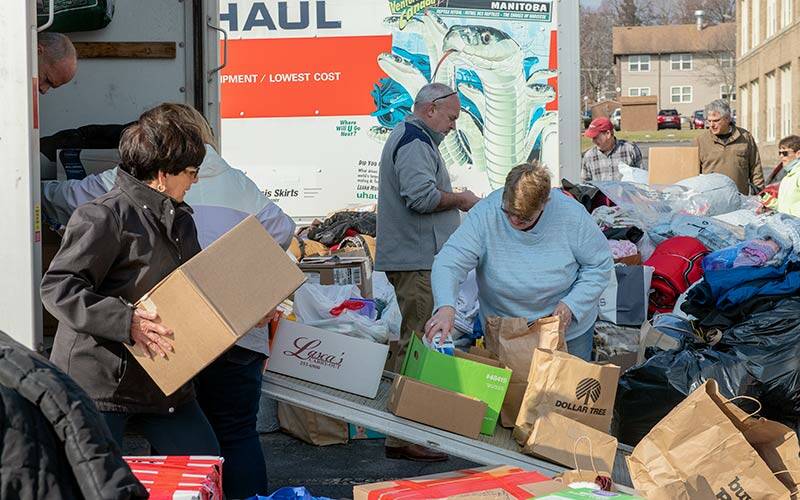 Donations of medical supplies and other needed items were collected March 10 at Holy Family Church in Auburn in support of Ukrainian refugees. (Courier photo by Jeff Witherow)

Auburn residents’ support for the people of Ukraine was on display in a big way earlier this month.

On March 10, volunteers filled five large trucks with donated medical supplies and other items to be shipped to Ukraine. Three days later, several hundred people rallied in front of Auburn’s Memorial City Hall in support of Ukraine. Oversized ribbons in the blue and yellow shades of the Ukrainian flag had been wrapped around the building’s columns earlier in the month.

“I am very grateful to all who are supporting our people in this time of need,” remarked Father Vasile Colopelnic, pastor at Sts. Peter and Paul Ukrainian Catholic Church in Auburn.

Many Cayuga County residents have stood in solidarity with the people of Ukraine since the earliest days of the current war in the Eastern European nation. More than 50 people attended a prayer service for peace at Ss. Peter and Paul on Feb. 24, the day Russian forces invaded Ukraine. The Auburn church has hosted evening prayer services every weekday since the war began, and Father Colopelnic has been fielding frequent inquiries from people who want to know what they can do to help the Ukrainian people, he told the Catholic Courier March 8.

The church is collecting monetary donations to support the relief efforts in Ukraine. Checks may be made out to Sts. Peter and Paul Ukrainian Catholic Church, with “Ukraine Relief” noted on the memo line. All financial donations are being forwarded to the Ukrainian Catholic Archeparchy of Philadelphia and will be sent to help with the most urgent needs in Ukraine, Father Colopelnic said.

Some of Sts. Peter and Paul’s parishioners still have loved ones who’d been living in Ukraine at the start of the war, and most of the church’s parishioners are descended from Ukrainian immigrants, he added. Approximately 2.6 percent of Auburn’s more than 26,000 residents claim Ukrainian ancestry, according to data from the 2020 U.S. Census.

‘The least we can do is help’

Even those who do not have Ukrainian ancestors have been moved to take action, according to Michael O’Gorman, who belongs to Sacred Heart Parish in Auburn. O’Gorman said he felt compelled to take action after witnessing televised and livestreamed footage of the violence taking place in Ukraine and the men, women and children who are suffering because of it.

“It’s heartbreaking,” he said. “We’re very lucky over here that we have such safety. The least we can do is help everybody out.”

O’Gorman and fellow funeral director Cheryl Foster, who belongs to St. Alphonsus Parish in Auburn, obtained permission to conduct a drive-through collection of medical supplies and other items at Auburn’s Holy Family Parish March 10. On March 7, they rented a 15-foot U-Haul truck and began letting people know — mostly via social media — that they’d be accepting such donated medical supplies as bandages, over-the-counter medications, diapers and personal hygiene items, as well as nonperishable food items, blankets, and warm socks and coats.

The response to their call for donations was overwhelmingly positive, Foster said. The drive-through collection was not supposed to start until 2 p.m. March 10, but donations started rolling in early, and by 1:30 p.m., the U-Haul truck was packed full.

Foster and O’Gorman called some friends who owned a local trucking company, and two more large trucks soon arrived at the collection site. Both of those were filled in no time, and at one point, there were so many vehicles waiting to get into Holy Family’s parking lot that the Auburn Police Department had to send personnel to direct traffic, Foster said. More than 50 volunteers unloaded items from cars and reloaded them onto the waiting trucks.

“It was awesome. The outpouring was unbelievable,” she said.

The four fully loaded trucks were driven to Syracuse that evening and unloaded at a warehouse. The empty trucks were driven back to Auburn, and one was reloaded that night with the last of the donated items, which had been left outside at Holy Family, and driven back to Syracuse the next day, Foster said. Volunteers from St. John the Baptist Ukrainian Catholic Church in Syracuse repacked the boxes over the weekend, and by March 13, the donations were on to New York City and then Ukraine, she said.

Foster said she believes a sense of helplessness coupled with a desire to take action led people to participate in the donation drive.

“I think everyone is so impacted by the terrible circumstances in Ukraine that they wanted to do something, and this gave them an opportunity to do something. We don’t know what to do, so at least this is something that we can do to show (Ukrainians) that we’re with them,” she said.

Tags: Cayuga County News, War in Ukraine
Copyright © 2022 Catholic Courier, Inc. All rights reserved. Linking is encouraged, but republishing or redistributing, including by framing or similar means, without the publisher's prior written permission is prohibited.