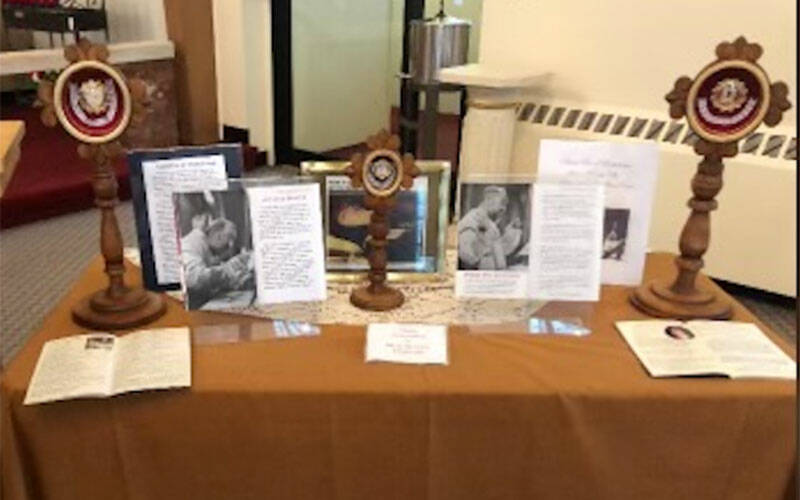 Relic of Padre Pio are seen at St. Francis of Assisi Church in Auburn. (Photo courtesy of Andrea Guerrera)

The relics were on display and made available for veneration in the Auburn church Oct. 3-4. Bishop Salvatore R. Matano celebrated an evening Mass at St. Francis of Assisi Oct. 4 and concluded the liturgy with a solemn blessing with the relics. A reception featuring Italian finger foods followed the Mass.

Both St. Francis of Assisi and St. Pio were Franciscans, and both had the stigmata, or five wounds of Christ, on their bodies, Father Lioi explained.

Padre Pio lived in southern Italy and entered the Capuchin Friars when he was 15. He was 31 when the stigmata appeared on his body. There was no explanation for the mysterious open wounds, and these wounds remained on his body for more than 50 years before disappearing several months before his death.

“St. Pio has been called the second St. Francis of Assisi because of the stigmata. That explains why Padre Pio often is pictured with gloves on his hands. Padre Pio, like St. John Vianney, … was able to read the souls of those who came to him for confession. St. Pio is recognized as the patron saint of civil defense workers, of adolescents and of his birthplace of Pietrelcina, Italy,” Father Lioi said.

The relics’ visit to St. Francis of Assisi in Auburn was part of a tour sponsored by the St. Pio Foundation, which has sponsored tours of the relics throughout dioceses and parishes across Canada, the United States and Mexico every year since 2017. More than 120 people came to see the relics at St. Francis of Assisi, and 96 of those individuals left prayer intentions, Father Lioi said.