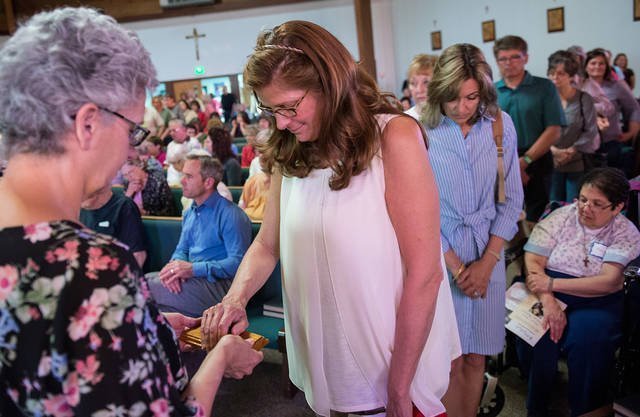 During a Lourdes Virtual Pilgrimage Experience May 8 at Auburn’s Sacred Heart Church, Sharon Nelson places her hand on a rock from the grotto where Mary reportedly appeared to St. Bernadette Soubirous. 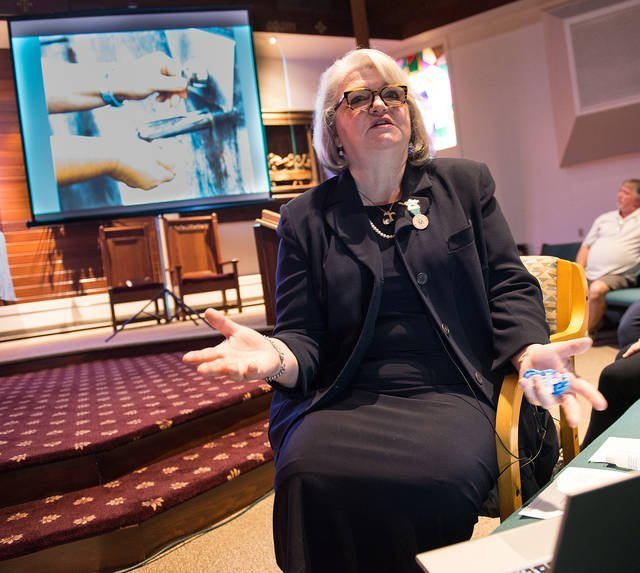 Several hundred people made a pilgrimage of sorts to Lourdes, France, last month without ever leaving American soil.

Instead, they gathered May 8 at Sacred Heart Church for a Lourdes Virtual Pilgrimage Experience presented by Our Lady of Lourdes Hospitality North American Volunteers, which is based in Syracuse. The approximately 300 people present at the Auburn church that evening not only learned about the 18 times Mary reportedly appeared to St. Bernadette Soubirous in Lourdes, but they also were able to touch a rock from the grotto where those apparitions are said to have taken place and bless themselves with water from the spring at the site of the apparitions.

“I thought it was a wonderful experience because as you know, most of us in the world cannot make a pilgrimage to Lourdes, financially or physically. Instead of going to the mountain, the mountain came to us,” noted participant Thomas Brennan, a member of Auburn’s St. Mary Parish. “I was very impressed with it. I was very happy to be there and achieve a virtual experience I could never make on my own.”

Sacred Heart hosted the virtual pilgrimage as an outreach to the broader community, according to Toni Colella, the event’s coordinator.

“This is our way of ‚Ä¶ extending and opening our arms, and helping Our Lady open her arms to everyone who seeks compassion, faith, courage,” explained Colella, who serves on Sacred Heart’s pastoral council.

Many people who are struggling with disabilities or health problems are particularly interested in visiting Lourdes and washing in or drinking from the spring there, which has been linked to dozens of miraculous cures, Colella said. However, the cost and logistics associated with traveling to France make such a pilgrimage impossible for many of these same people, she added.

On the other hand, the prospect of traveling several minutes or even several hours by car to Auburn is much more appealing to many people, Colella said. Sacred Heart seemed like an ideal location to host a virtual pilgrimage because it has ample parking, and the church’s entrances are at grade level and don’t require people to navigate steps, she added.

The virtual pilgrimage attracted people from all corners of Cayuga County and even from as far away as Pennsylvania, she said, noting that more than a half-dozen of those people were in wheelchairs, and many more were using canes and walkers. Colella said she was moved by the sight and sound of 300 people joining together to sing such hymns as “Immaculate Mary” and “Hail Holy Queen.”

“People in this day and age just are starving for this, and so we had a full house. It was just beautiful,” Colella said.

The pilgrims listened with rapt attention to the presentation by Marlene Watkins, who founded Our Lady of Lourdes North American Volunteers in 2002 after making her first two pilgrimages to Lourdes.

The organization is a Catholic Public Association of the Christian Faithful of the Diocese of Syracuse. Such associations are founded by the authority of a local bishop — in this case, the late Bishop James M. Moynihan, a Rochester native who served as bishop of the Syracuse Diocese from 1995-2009 — and serve specific purposes, Watkins explained.

“Our mission, for example, is to share the message of Lourdes, to bring the sick to Lourdes, and to serve and volunteer at the sanctuary of Lourdes,” she said.

The association’s volunteers carry out this mission by presenting virtual pilgrimages, volunteering in the baths and facilities in Lourdes, and bringing the disabled and seriously ill to Lourdes.

“We bring people on kidney dialysis, on ventilators, on oxygen, people who are profoundly disabled — for example, a quadriplegic — or people who are end state. We bring volunteer doctors and nurses and caregivers and companions to make it possible for them to go all the way to Lourdes,” Watkins said.

“We go wherever we’re invited,” Watkins said, noting that the virtual experiences are available in English, Spanish, Chinese, Portuguese and American Sign Language. “It’s just really an incredible, life-changing privilege to serve the sick from around the world, just as much as it’s a privilege to bring the message of Lourdes to people at home.”