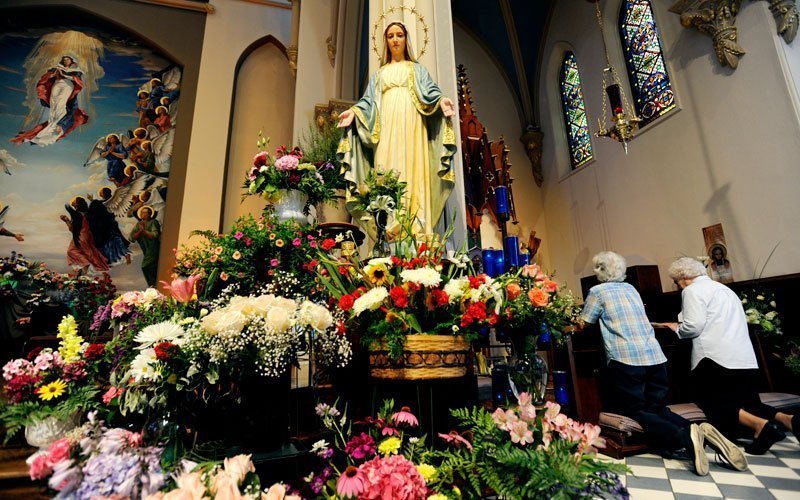 Two women pray near a statue of Mary surrounded by flowers Aug. 14 during the second-annual Flower Festival at Auburn’s St.Mary Church.

AUBURN — Visitors to St. Mary Church Aug. 14 found themselves surrounded by the sweet scent of thousands of flowers and the equally sweet strains of instrumental music. The night before, volunteers had transformed the church’s interior into a lush indoor garden for the parish’s second-annual Flower Festival, held Aug. 14-16.

“I think when you just walk in here, it is so beautiful it just gives you a feeling of peace,” said Sandy Lent, one of the volunteers on the Flower Festival Committee. “It’s like a serenity garden, and you just appreciate the beauty of nature.”

Large floral displays festooned each of the eight pillars lining the church’s center aisle, accompanied by smaller displays on thin stands next to the aisle. Arrangements lined the far wall of the sanctuary, and large bouquets of vibrantly colored flowers surrounded the statue of Mary and the baptismal font. Red blossoms were arranged around the statue of the Sacred Heart of Jesus, and the statue of St. Anne and her daughter, Mary, stood amongst a bevy of yellow, amber and white blooms. More white flowers were clustered around the tabernacle, and a single white flower was placed in a vase next to a small statue of St. John Vianney, the patron saint of parish priests.

The parish planned last year’s inaugural Flower Festival to commemorate St. Mary’s 140th anniversary, said Father Frank Lioi, pastor. The parish was founded on Aug. 15 — the Feast of the Assumption of Mary — in 1868, he said, and the parish usually celebrates its anniversary with a picnic on the eve of the feast day. Last year, however, he and parishioners decided they wanted to do something special and unique in honor of the parish’s milestone anniversary.

Father Lioi recalled visiting Belgium’s Cathedral of Ghent during its annual Begonia Festival, when the entire inside of the cathedral was festooned with begonias. He also knew that in 2005, the Roman Catholic Westminster Cathedral in London was bedecked with more than 1 million blooms for its ninth-annual Flower Festival. A similar festival seemed like an appropriate way for St. Mary to mark its anniversary and honor its namesake, he said.

“Flowers have always been associated with the Assumption. Then there’s this whole tradition of Mary Gardens. There are over 700 flowers that are named for some virtue or attribute of the Blessed Virgin Mary,” Father Lioi said.

Mary Gardens are gardens containing these flowers linked to Mary, and they were popular in Britain before the Reformation. The Mary Garden Movement was founded in the United States in 1951, the priest said, when a historian began researching and documenting all the varieties of plants and flowers that have been associated with the Blessed Mother.

Last year the Flower Festival Committee volunteers solicited help from parishioners with green thumbs and asked them to bring in cut flowers from their gardens or arrangements they’d put together themselves. They also asked local musicians to donate an hour of their time to play music in the church. They weren’t sure what to expect, but Father Lioi said the first festival turned out “more spectacularly than we had expected.”

“People were coming into the church and just sitting quietly in the pews and just kind of gazing at the flowers while the music was playing. It was a very contemplative experience, and we weren’t expecting that,” he said.

This year many of the local florists asked to be involved, so 10 florists donated the large displays on the pillars and two more arrangements near the altar and tabernacle. More than 100 parishioners brought flowers from their own gardens or cut flowers they’d purchased, said Sally Corcoran, chairperson of the Flower Festival Committee.

A local florist taught a group of volunteers the basics of flower arrangement, and those volunteers arranged the donated flowers, she said. More than 20 others volunteered to serve as greeters during the festival, and another 25 volunteered to work in the small gift shop set up in the back of the church.

“I’ve never had this much help. Everybody’s just been wonderful and helpful,” Corcoran said.

Malandruccolo said she was excited to be able to help with the festival.

“I’ve always been interested in the meaning of flowers, so having the opportunity to arrange and see all the different flowers come in just brought new meaning to it,” she said.

The festival has been a unifying force, Corcoran said. It’s brought parishioners together as they work together and create something beautiful they can all enjoy, she said, but it’s also pulled the parish closer to the rest of the community, as all are welcome to enjoy the Flower Festival.

“It’s an energizer for the parish,” Lent added.