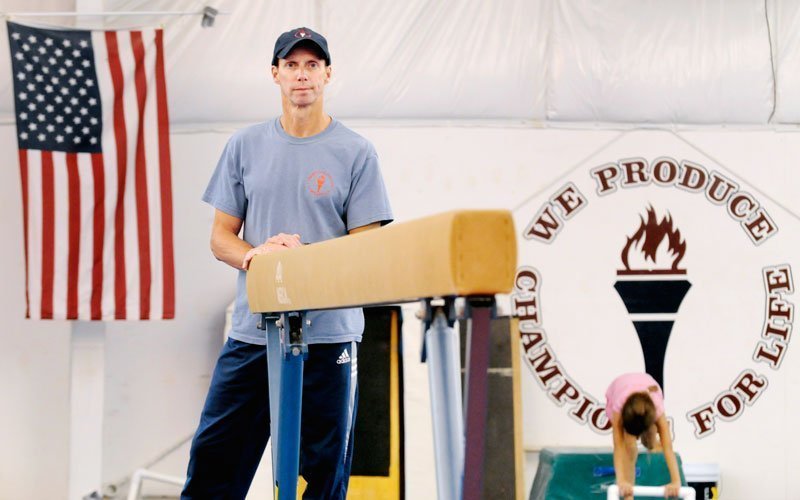 The 2008 Summer Olympic Games in Beijing, China, are now just a memory, but Auburn author Michael Henty wants athletes to continue to go for the gold. God’s gold, that is.

Henty released his first book, titled Go For God’s Gold — Develop Your Spiritual Strength Through Sports, on Aug. 8, the day of the Beijing Games’ opening ceremonies. This seemed like an optimum time to release the book because the Olympics usually attract a surge of new athletes to the featured sports, especially those that receive the most media attention, such as gymnastics and swimming, Henty told the Catholic Courier.

“There are so many people looking at the Olympics right now. Sports has a very high popularity among our youth and even young adults,” said Henty, president and founder of Champions for Life, a nonprofit organization that operates Auburn’s multisport complex, Champions for Life Sports Center.

The training required of Olympic athletes is not all that different from the spiritual training required of people trying to live Christian lives, maintains Henty, who belongs to St. Alphonsus Parish in Auburn. A longtime gymnastics coach, Henty hopes his book will help athletes recognize the virtues they’ve most likely learned — often without even realizing it — during the course of their training and learn how to apply those virtues to their spiritual lives.

Athletes in training must learn the value of perseverance, discipline and courage. They know how important these virtues are on the playing field, but they’re valuable off the field as well, Henty said.

“Kids just have a drive. They want to be a professional athlete or Olympian, and their parents are pushing in that direction too, and I don’t think they look at it as a spiritual experience,” he said.

The vast majority of athletes will never win an Olympic medal or become famous, but that doesn’t mean they can’t utilize their training throughout the rest of their lives, explained Henty, a former member of the U.S. Junior Olympic coaching staff for the U.S. Gymnastic Federation.

“All these athletes are putting all this time and effort into training and if they don’t win the gold medal, what value is there? How do you give all the time you spent some significance in your life?” Henty said. “Hopefully they can realize this has helped them grow in value.”

Henty tries to convey this realization to readers in eight chapters bearing such titles as “Confessions of a Coach,” “Discipline of a Disciple,” “Sparring With Satan,” “Going the Distance” and “Giving Glory to God.” Go For God’s Gold is endorsed by Olympic gold-medalist figure skater Tara Lipinski, three-time Olympian and gold-medalist speed skater Dan Jansen, and Mike Sweeney of the Oakland A’s baseball team.

The manuscript began taking shape more than two decades ago, but Henty was always too busy coaching and raising his four children to seriously pursue the book. He did, however, find time to write a number of articles for the Catholic youth magazine Hearts Aflame. Many of the articles dealt with the connection between sports and spirituality and were drawn from the manuscript, Henty said.

“When the editor for the magazine said, ‘Mike, I need an article by Friday,’ then I could do it. (With the book) there was no publisher at the time saying, ‘Mike, I need this by this date,’ and I was able to put it off,” he said.

This past Christmas Henty finally decided the time was right for him to seriously focus on the manuscript.

EDITOR’S NOTE: For more information about Go For God’s Gold — Develop Your Spiritual Strength Through Sport or to purchase a copy, visit www.goforgodsgold.com.