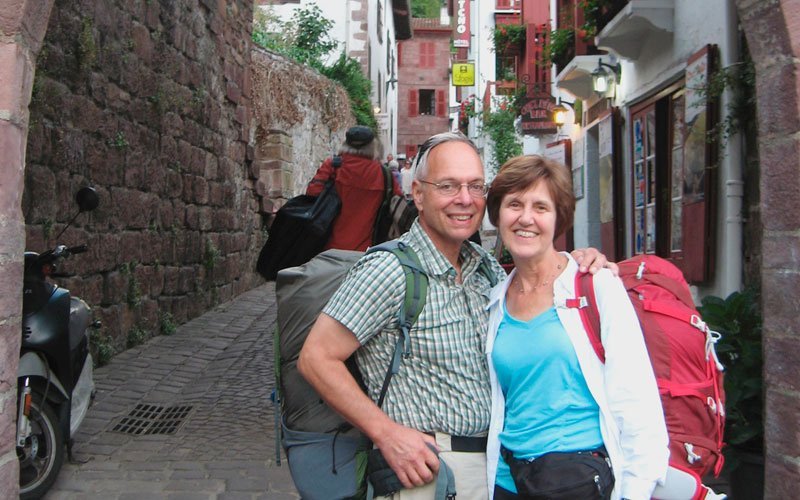 Deacon Nick Valvo and his wife Judi hiked Spain's El Camino de Santiago, or the Way of St. James, in August 2013. Above, they pose for a photo in St. Jean Pied de Port, France, at the start of their journey.

They hiked Spain’s El Camino de Santiago, or the Way of St. James, which runs from the village of St. Jean Pied de Port in France to the cathedral in Santiago de Compostela, Spain, where the remains of St. James the Greater are believed to be buried. They returned to the United States with hundreds of pictures and memories from an experience they won’t soon forget.

“It’s not about the destination at Santiago de Compostela. It’s about the journey,” Judi Valvo said.

And what a journey it was. The Valvos spent five weeks walking what pilgrims refer to as “the Camino.” Their route, which has been popular with pilgrims since the Middle Ages, covered 480 miles and took them over the Pyrenees Mountains and across the northern part of Spain. Carrying their clothes and meager supplies in backpacks, they usually walked at least a dozen miles each day, and many of those miles took them over steep mountainsides and through wide open countryside. At night they slept in bunk beds in albergues, or Spanish hostels designated for pilgrims.

The Valvos, who have previous hiking and backpacking experience, prepared for their journey by hiking in the Adirondacks and walking from their Auburn home to Skaneateles and back, which was about a 12-mile round trip. The journey across Spain was more than just a physical challenge for the couple, who agreed the pilgrimage was a very spiritual experience.

The impetus for the trip came last spring, after Deacon Valvo returned from a retreat at Mount Saviour Monastery in Pine City in the Southern Tier. During the retreat he’d read a book about a Catholic priest’s experiences on the Camino, and he returned home with a strong sense that God was calling him to make the trip, Deacon Valvo said. Judi Valvo agreed to join her husband on the pilgrimage, and was overjoyed to find her Catholic faith reaffirmed at every turn along the way.

“God was with us from the very beginning,” she noted.

The Valvos recognized God at work through seemingly chance encounters with those they met along the way. The Valvos formed lasting friendships with some of these people, including a family of six from Australia who was with them for much of the pilgrimage. Each pilgrim they encountered, whether they kept in touch or not, made a difference in their lives in either practical or spiritual ways. A female pilgrim and her elderly mother, for example, showed the Valvos that it was possible to take a taxi from one albergue to another. This tip became invaluable when Judi Valvo injured her ankle early in the trek and was unable to hike with Deacon Valvo for one week, instead opting to travel by taxi to each day’s albergue, where she met up with her husband.

Another individual that left a lasting impression on the Valvos was a man who was not even hiking the Camino. He lived in the area and, after meeting the pilgrims, brought them back to his home for a memorable and laughter-filled dinner with his family. Such shared meals were highlights of the journey for Judi Valvo, who organized a makeshift cheese and wine party for pilgrims at one of the hostels. Sharing meals and a common journey made for a strong sense of eucharistic communion, she noted. She also felt a strong sense of communion with the millions of Catholics who had traveled the Camino before her.

The trip was a very faith-filled experience, agreed Deacon Valvo.

“I felt connected with God and Jesus through the people I met,” he said.

Pilgrims walk the Camino at their own pace, so sometimes the Valvos walked with their newfound friends and other times they met up with them in albergues at night. It wasn’t unusual to spend several days with one group before losing track of them for a week or more, only to meet up again further down the road.

Deacon Valvo said this experience was best summed up by the 10-year-old son of the Australian couple that befriended them.

“He said, ‘Everyone walks at their own pace. The best way you can honor someone’s pace is by walking your pace,'” Deacon Valvo said. “I thought that was neat. The Camino in a very real way is a metaphor for life, so I think he got it.”