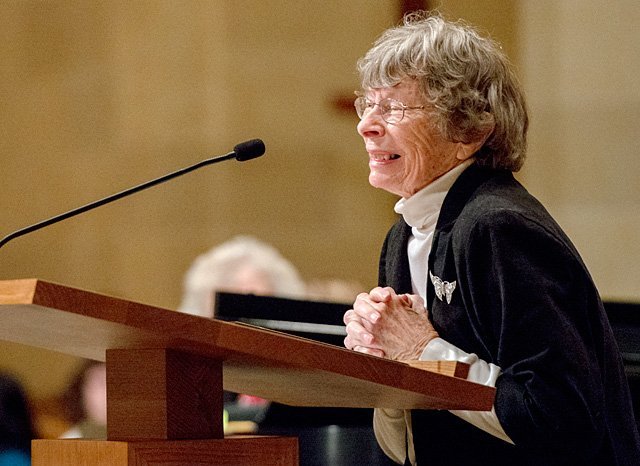 When the organist at St. Mary Parish in Auburn passed away, Muriel Hickey agreed to step in and play at the parish until a replacement organist was found.

When asked if the parish is still searching for that elusive replacement organist, Hickey laughed softly.

"I don’t think so," said Hickey, who has been a fixture in front of the parish’s historic pipe organ for 43 years.

Not only did the parish suspend that search several decades ago, but parishioners and parish leadership alike consider Hickey to be one of St. Mary’s treasures, according to Joel Morehouse, music director at the parish.

Hickey’s contributions to St. Mary have garnered her four awards in recent months. In August she received the Vox Organi Award, which the national Organ Historical Society presents to dedicated organists and individuals who protect historic pipe organs. That month she also received a certificate of appreciation from the national office of the American Guild of Organists as well as a proclamation from state Assemblyman Gary Finch. Most recently she received the Diocese of Rochester’s St. Cecilia Life-Time Achievement Award during a ceremony held Nov. 21 at Sacred Heart Cathedral in Rochester.

The lifetime achievement award is fitting because Hickey has been a musician for most of her life. She learned to play the piano at the age of 4, and continued to study piano until she was 15. At that point, someone suggested she might enjoy "church work," which meant she’d have to learn to play the organ, she recalled.

Hickey began studying under an organist in the Syracuse area, where she grew up. After high school she went on to Syracuse University, where she studied the organ and earned a bachelor’s degree in music. Although she was passionate about music, she decided to hedge her bets by earning a master’s degree in elementary education.

"Most musicians need to have another job as well, because we really don’t get paid very well," explained Hickey, who taught at public schools for approximately 13 years.

Even during the years she taught, however, Hickey usually could be found in a church on the weekends, either playing the organ or directing a choir. After all these years, she still loves playing the organ, Hickey said.

"It brings a great deal of enjoyment to you, and a feeling of accomplishment because you don’t just stay with what you learned in the beginning. You’re constantly learning new things," she remarked.

Hickey’s willingness to learn new things and her extraordinary skill set have provided St. Mary parishioners with the opportunity to hear quality organ music week after week, Morehouse said. Hickey started at St. Mary during a "time of great upheaval for Catholic liturgical music," Morehouse said, noting that many parish choirs and organs fell silent in those first few years after the Second Vatican Council. Hickey’s proficiency on the organ, however, left parish leaders with no doubt that the organ and choir would continue to be heard at the parish, he said.

"It was also Muriel’s steady personality, her friendship and her musical skill which was the rock of the choir for more than four decades," Morehouse said.

Morehouse also credits Hickey with helping to preserve the parish’s historic organ, which was built in the late 1800s and has received a special citation from the Organ Historical Society. It is a tracker organ, which means thin wooden strips connect the organ’s keys to its valves.

"It’s entirely mechanical and lacks most of the modern conveniences we find on newer organs. Playing it is a bit of a challenge, like driving a Mack truck. Muriel makes it look easy, but the keys and pedals take tremendous strength and technique to play," Morehouse explained. "Because she never complained about it, but simply showed up and played the organ, we have a unique historical treasure which has gained national attention. In a way, Muriel is the reason we have this nationally significant historic pipe organ still intact."

Hickey said parishioners seem to appreciate her efforts, and every once in a while they will tell her how much they enjoy her music. St. Mary’s pastors, choir directors and singers also have made her 43 years at the parish very enjoyable, she added.

"It is just a nice place to be," Hickey remarked.