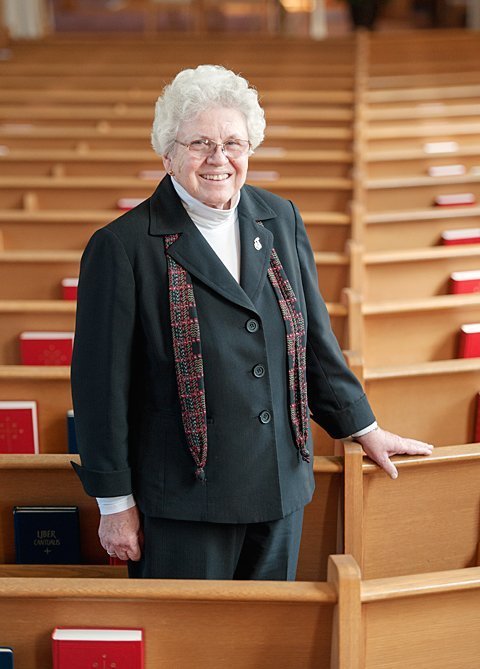 Sister Chris Treichel is retiring as pastoral administrator of Sacred Heart and St. Ann parishes in Auburn and Owasco.

Sister Chris Treichel took the first step toward discerning her vocation while still in elementary school at St. Teresa School in Washington, D.C.

Admiring the women religious who taught her there and at La Reine High School in Suitland, Md., she decided she wanted to follow in their footsteps, she recently told the Catholic Courier.

"I always wanted to be a nun. It was always in my heart. I loved the sisters through grade school and high school. You just hung with the sisters and enjoyed being with them," recalled Sister Treichel, who in June will retire as pastoral administrator of Sacred Heart Parish in Auburn and St. Ann Parish in Owasco.

After graduating from La Reine, Sister Treichel went to St. Bonaventure University in Olean, living in a dorm overseen by the Franciscan Sisters of Allegany, whose motherhouse was across the street from campus. In 1965, after completing one year of college, Sister Treichel decided to enter the Franciscan Sisters’ community, and she made her final profession of vows in 1972.

She spent her first decade of ministry as an elementary-school teacher at schools in New Jersey and the Bronx.

"My dream when I was a kid in grade school was I wanted to be like the nuns and I wanted to teach, and I did do that, but I had other gifts that my community called forth from me," Sister Treichel said.

She continued in the classroom, but this time as a student. Recognizing her longtime love of liturgy, she enrolled at St. John’s University in Collegeville, Minn., and earned a degree in liturgy. After completing her studies she spent a year as a pastoral associate in Olean (Diocese of Buffalo), followed by nine years as a pastoral associate at St. Anthony Parish in Cortland (Diocese of Syracuse).

She moved to the Diocese of Rochester in 1990 and served for nine years as pastoral associate at St. John the Evangelist Parish in Rochester. In 2000 she moved to Auburn to join the staff at Sacred Heart and St. Ann, where she was pastoral associate for two years before becoming pastoral administrator in 2002. In that role she was able to utilize her love of liturgy as she oversaw the faith community’s liturgical life.

"It was just a joy to plan and celebrate the liturgies with the people so they could be nourished with the experience of coming together," she said.

Sister Treichel said she has been sustained by the relationships she’s built with the people of Sacred Heart and St. Ann. Those relationships have allowed her to journey with parishioners through good times as well as the difficult times they’ve encountered, and she has considered it an honor to be part of both types of experiences.

"I tell them, ‘You’re my family, my third family,’" explained Sister Treichel, who has served as general treasurer of the Franciscan Sisters of Allegany for eight years. "I have my blood family, my (Franciscan) community and I believe everyone in the parish here is my family. It’s just so wonderful how they use their gifts and talents for building up the community."

After retiring from parish ministry Sister Treichel said she will return to her community’s motherhouse, and in the fall will take a six-week sabbatical to Canossian Spirituality Center in Albuquerque, N.M.

Her parish family at Sacred Heart and St. Ann will celebrate her retirement as well as her 50th year as a Franciscan Sister of Allegany with a reception following the 4:30 p.m. Mass on June 11 at Sacred Heart.