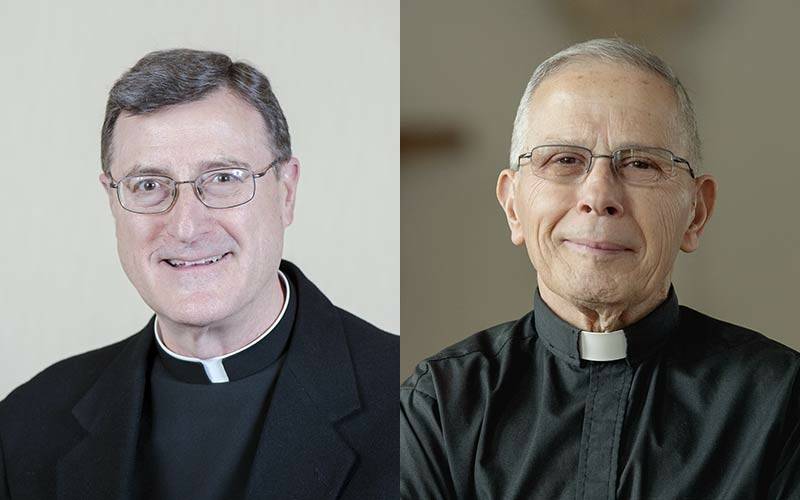 The Cultural Italian American Organization of Cayuga County recently honored two Catholic priests for their dedication to the Auburn community.

Father Frank Lioi and Father Louis Vasile were the guests of honor at the organization’s seventh-annual recognition dinner, which took place Oct. 9 at Auburn’s Springside Inn.

The organization, known as C.I.A.O., was founded in 2014 to promote and enhance Italian American heritage and culture in Cayuga County. Each year, the organization recognizes one or two individuals who have made important contributions to the local community, explained Paolo Saltarello, chairman of the organization.

“We look for someone that gives so much of himself or herself in general to the community,” he said.

Fathers Lioi and Vasile were chosen to be this year’s honorees because of their many dedicated years of priestly service, Saltarello said.

“They both have served very well in the Auburn community for so many years,” he added.

The grandson of Italian immigrants, Father Vasile grew up in an Italian neighborhood in Auburn, where his family belonged to St. Francis of Assisi Parish and he attended the parish school. He was inspired by the faith of his family members, as well as the women religious and priests he encountered, especially Father John Nacca, who was pastor at St. Francis of Assisi for nearly 40 years. Father Vasile discerned his vocation when he made his first Communion at 7 years old.

“From that day on, I was absolutely taken up by the priesthood,” he remarked.

Father Vasile graduated from Auburn’s Mount Carmel High School when he was 17 and left Auburn to study at St. Andrew’s and St. Bernard’s seminaries in Rochester. He was ordained in 1972 back in Auburn at St. Francis of Assisi Church. Over the next 26 years, he served at a number of parishes outside of Auburn and spent four years as secretary to Bishop Emeritus Matthew H. Clark.

He returned to his home city in 1998 when he became pastor of Auburn’s St. Alphonsus Parish.

“I’ve been here ever since,” he said.

Father Vasile reached senior status in 2015 but continues to help out at parishes in Cayuga County.

Like Father Vasile, Father Lioi has a soft spot for Cayuga County’s sizable Catholic community. Although he is a native of Rochester, he has served in Auburn for nearly two decades.

As a child, Father Lioi’s family belonged to St. Francis of Assisi Parish in Rochester, where he attended the parochial school. After studying at St. Andrew’s and St. Bernard’s seminaries in Rochester, he was ordained in 1967. He served at St. Bernard’s Seminary and at the American College of Louvain — a seminary in Belgium — as well as at parishes in Rochester, Greece, Dryden and Groton before coming to Cayuga County in 2004 as pastor at St. Mary Parish in Auburn, where he still serves.

Father Lioi took on the additional roles of pastor of Sts. Mary and Martha Parish in Auburn in 2014 and Our Lady of the Snow Parish in northern Cayuga County in 2020. He supports a number of civic and community functions, has been instrumental in bringing a number of cultural and musical events to Auburn, and said he feels privileged to be able to serve the local Catholic community.

“I am humbled that I have been chosen to be recognized,” Father Lioi said.

Tags: Cayuga County News
Copyright © 2022 Catholic Courier, Inc. All rights reserved. Linking is encouraged, but republishing or redistributing, including by framing or similar means, without the publisher's prior written permission is prohibited.