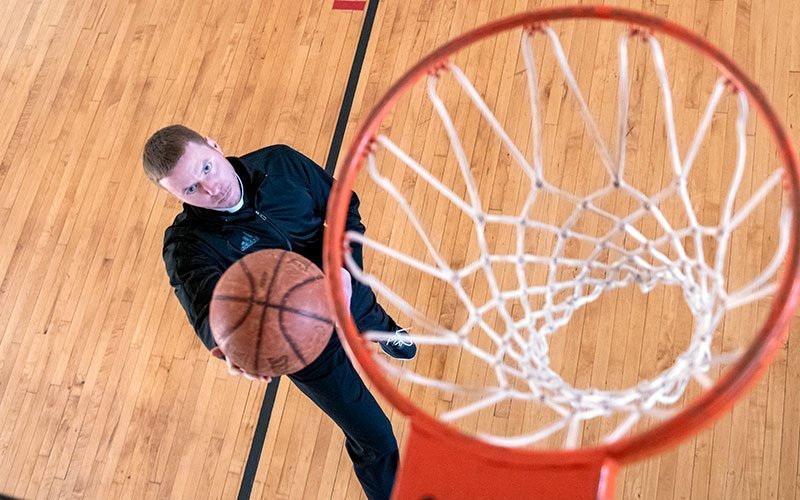 Have you ever seen a Catholic priest slam-dunk a basketball?

You may have if you’ve tuned in to Holy HORSEplay, a YouTube video series Father Justin Miller created this spring.

In these contest, Father Miller and his opponents, playing in separate locations but connected through the internet and video technology, must describe the shots they will take before making them. Each time a player misses the shot he describes, he accumulates one of the letters in the word “horse.” The first person to accumulate all five letters loses the match.

Professional basketball players competed remotely in similar matches televised on the cable sports network ESPN in April, as sporting events throughout the nation were cancelled in the hopes of stemming the spread of COVID-19, the disease caused by the novel coronavirus. Although Father Miller’s series is similar to ESPN’s HORSE tournament, Holy HORSEplay also features interview segments during which Father Miller and his priestly opponents discuss their Catholic faith and vocations to the priesthood.

The goal of mixing sports and faith in this way is to bring God’s message to people who need to hear it but may not be active churchgoers, said Father Miller, parochial vicar at Auburn’s St. Mary and Sts. Mary and Martha parishes.

“The thought was how could we present something that leads with fun and is inviting to an unchurched person, but that would actually bring a message in the midst of it,” Father Miller told the Catholic Courier. “We can reach the unchurched and present a positive view of the priesthood.”

With no live sporting events taking place during the pandemic, Father Miller assumed sports fans were probably tired of watching reruns of past competitions on television and might be hungry for some new sports-related content. He theorized that programming satisfying the hunger for sports might draw more viewers to St. Mary Parish’s YouTube channel, and might be particularly appealing to men.

“I think a lot of men my age or younger were not that interested in church to begin with, but they often seem to like sports,” said Father Miller, 34. “The thought was, if it was competitive, it would be not only entertaining but a draw to men particularly.”

In the first episode of Holy HORSEplay, which premiered on St. Mary’s YouTube channel April 26, opens with a video message from Auburn native and professional baseball player Tim Locastro. Locastro, who played Catholic Youth Organization basketball for St. Mary and Sacred Heart parishes in his younger days, now plays for the Arizona Diamondbacks and offered his sympathy to Auburn’s current CYO basketball players, whose year-end banquet was cancelled due to concerns over the coronavirus.

Locastro’s message was followed by a close-up video of a priest’s black dress shoes being swapped out for a pair of black sneakers with white laces. Music pumps in the background as the next shot shows Father Miller, whose Roman collar is clearly visible under the collar of his black Adidas track jacket as he bounces a basketball in a gymnasium on the grounds of Sts. Mary and Martha Parish.

Father Miller’s opponent in this inaugural match was Father Michael Merritt, parochial vicar at St. Francis and St. Clare Parish in Waterloo and Seneca Falls. After playing a virtual game of “Rock, Paper, Scissors” to determine who went first, Father Miller and Father Merritt each took several shots on the basket.

The second episode of Holy HORSEplay launched May 11 and featured Auburn native Father Nathan Wayne, who is a priest of the Legionaries of Christ religious order and filmed his segments from his current assignment in Madrid, Spain. The third episode, published June 1, features Father Jeff Chichester, parochial vicar at St. Joseph Parish and Church of the Holy Spirit, both in Penfield.

The fourth episode, which went live June 21, takes a break from basketball and instead showcases priests from throughout New York state in a competition to see who tells the best jokes. Father Miller plans to produce at least one more basketball video as well as a soccer video sometime this summer.