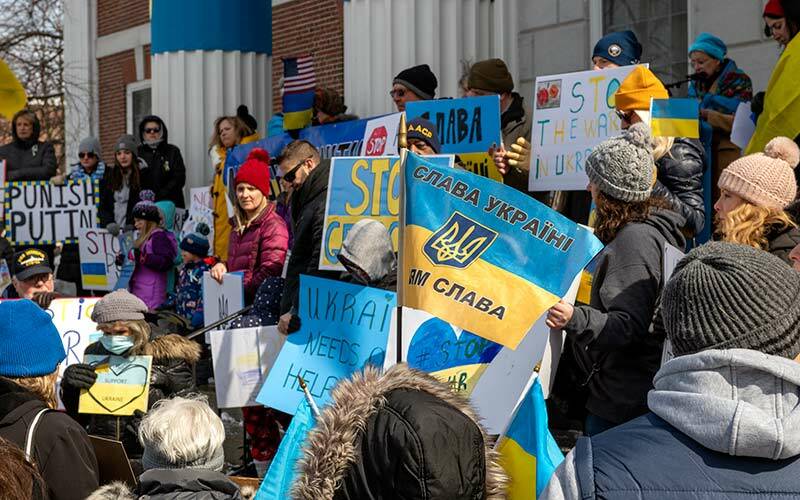 Auburn residents turn out for a March 13 rally in front of Auburn City Hall to show support for Ukraine. (Courier file photo)

At just 5 years old, Josephine Kloiber already knows what it feels like to make a difference in the lives of people living half a world away.

In March, Josephine decided she wanted to do something to support the people of war-torn Ukraine. She began making blue and yellow bracelets, each bearing the word “Peace” in lettered beads. She sells each bracelet for $10, which she contributes to the relief effort led by Ss. Peter and Paul Ukrainian Catholic Church in Auburn.

“Two months later, we are now at $1,370, and she always said she will not stop. As long as the war is going on, she will continue selling bracelets,” remarked Josephine’s mother, Janine Kloiber. “We are very proud, and we hope she will inspire others and show that even if you are only 5, you can make a difference.”

Josephine may be one of the smallest Auburn residents working to aid Ukrainian relief efforts, but she is by no means the only one.

In fact, since early March, she and her classmates at Creative Minds Montessori School in Auburn have been working with officials at the Cayuga County Office Building to collect spare change through their “Coins for Ukraine” initiative.

“In school, they were talking about the war in Ukraine, and all of the students immediately were confused and upset, and they decided right away they wanted to do something to help,” Kloiber explained.

That same need to take action seems to be common among the people of Auburn and Cayuga County. Since the beginning of the war on Feb. 24, individuals, organizations and businesses throughout the area have stepped up time and again to show their support for the Ukrainian people and contribute to relief efforts, many of them spearheaded by Ss. Peter and Paul.

The Ukrainian church, which has hosted prayer services for peace each weekday since Russian forces invaded Ukraine, has served as a collection point for monetary donations, which are forwarded to the Ukrainian Catholic Archeparchy of Philadelphia and from there sent to help with the most urgent needs in Ukraine, according to Father Vasile Colopelnic, pastor at Ss. Peter and Paul. Checks may be made out to Ss. Peter and Paul Ukrainian Catholic Church, with “Ukraine Relief” noted on the memo line, and mailed to the church at 136 Washington St., Auburn, NY 13021.

A hastily organized medical-supply collection conducted at Holy Family Church in early March garnered an overwhelmingly positive response from the community, and five truckloads of medical supplies and other items were shipped to Ukraine.

A second collection drive, sponsored by the Auburn Rotary Club and the Auburn chapter of the Ancient Order of Hibernians, took place at Auburn High School on April 23. The many medical supplies collected during the drive were sent to New Jersey and from there would be shipped to the Sheptytsky Catholic Hospital in Lviv, Ukraine, according to Father Colopelnic.

“I want to thank once again all those who tirelessly worked to help achieve this necessary charitable action intended to alleviate the suffering of the Ukrainian people who are defending their right to exist as a free European nation,” he said in a May 5 post on Ss. Peter and Paul’s Facebook page.

The Ukrainian parish planned a third medical-supply collection, this time expanding the plea for assistance to parishes outside of Cayuga County. Baskets to collect donated medical supplies were placed at the doors of St. Francis and St. Clare Parish’s churches in Waterloo and Seneca Falls. Father Colopelnic hoped to be able to fill another truck with medical supplies by the time the third collection wrapped up May 29.

A sampling of support

The following fundraisers are representative of the other ways Auburn citizens have supported Ukrainian relief efforts in recent weeks:

• Students at St. Albert the Great Academy in Auburn raised $1,000 for relief efforts through an early April bake sale.

• The MasterWorks Chorale of CNY performed a benefit concert May 1 at St. Mary Church in Auburn. The concert raised more than $1,000, and the chorale performed the Ukrainian National Anthem in English at the night’s end.