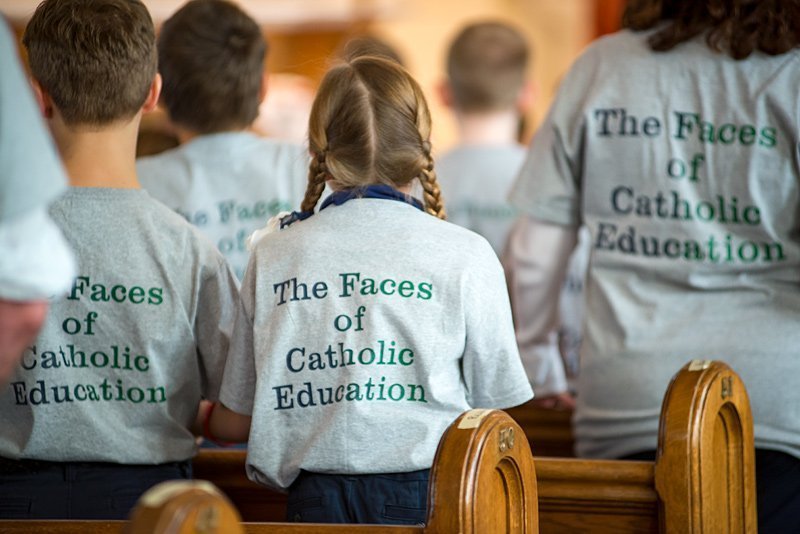 Catholic education has been present in Auburn for many years. But in the past few months the faces of Catholic education in Auburn have become much more visible in the community, thanks to a joint marketing campaign from St. Alphonsus School and Tyburn Academy of Mary Immaculate.

During this campaign, large advertisements featuring the words “Faces of Catholic Education in Auburn” and photos of current students were placed on the exteriors of several of Auburn’s Centro transit buses, and a banner promoting both schools was flown over a major thoroughfare in town.

Those were the largest and most visible elements of a campaign that also included newspaper advertisements and a mass postcard mailing, noted Ann Fallon, Tyburn’s director of development. The campaign was funded by a grant from the Everest Foundation for Family Enrichment, which is based in Auburn and has been supportive of Catholic education in the past, she said.

“We did some things we’d never been able to do before. Everything we did had both of (the schools’) names on it to kind of highlight Catholic education here in Auburn and make that connection to the community,” Fallon said.

The students and staff of the two schools also connected with each other, which is something else that hadn’t previously been done, according to Fallon and Michael Carney, principal at St. Joseph. The marketing campaign kicked off right before Catholic Schools Week, held Jan. 29 through Feb. 4, and students from Tyburn and St. Joseph came together for several special events during the week. The highlight of the week, noted both Fallon and Carney, came on Feb. 3, when the students and staff of both schools attended Mass at St. Alphonsus Church followed by a luncheon. All of the students wore identical gray T-shirts that had been printed for the occasion.

“I think the kids really enjoyed it. They all enjoyed having lunch together and getting the T-shirts. It was a fun week for them, and we had some very positive feedback from the community,” Fallon added.

Several people told Fallon they were pleased to see the two schools working together, which is something many of the other Catholic institutions in Auburn also have begun to do in recent years. Auburn’s Catholic parishes already work together with St. Joseph’s, Tyburn, the local Knights of Columbus and Champions for Life Sports Center on a Virtue of the Month program, but Carney thinks Auburn Catholics have been yearning for a stronger show of unity from the two schools.

“We are different and they’re not expecting us to become carbon copies of each other, but I think they want … to see the two schools are going to work together to promote what is common, which is the education in the Catholic style. I think people think this is essential to making sure that Catholic education still lives here,” Carney said.

The committee that planned the marketing campaign comprises parents of St. Joseph and Tyburn students as well as both principals, and that committee is continuing to work to pave the way for more collaboration in the future. Such collaboration is necessary to promote an awareness of the availability of Catholic education in Auburn, as well as an understanding of the value of Catholic education, Fallon said.

“Catholic education is a very different education because of the formation of the whole person, not just in academics but in virtue and family values,” she said.