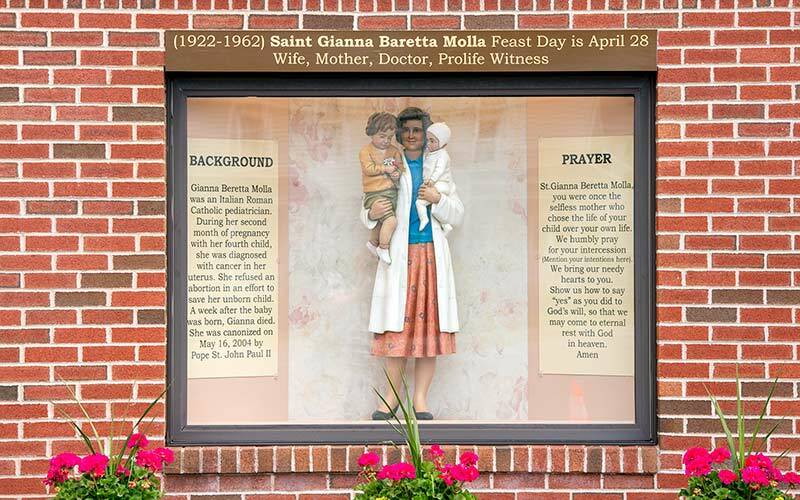 A statue of St. Gianna Beretta Molla was dedicated May 15 at St. Francis of Assisi Church in Auburn. (Courier photo by Jeff Witherow)

Shortly before Christmas, Father Frank Lioi ordered a statue of St. Gianna Beretta Molla, a patron of the pro-life movement, for the grounds of St. Francis of Assisi Church in Auburn.

Little did he know that by the time the statue arrived from Italy, the abortion debate in the United States would reach a fever pitch.

The parish’s new shrine to St. Gianna was dedicated May 15, less than two weeks after the leaked draft of a U.S. Supreme Court opinion seemed to indicate the court was considering overturning the 1973 Roe v. Wade case, which legalized abortion in the United States. A number of protests and marches in support of abortion took place throughout the nation on the very weekend the Auburn shrine was dedicated.

In the midst of all this unrest, the shrine to St. Gianna stands as a very visible pro-life witness, Father Lioi said.

“It’s interesting that the St. Gianna shrine comes to fruition at the very time where there is all this rhetoric surrounding the leak of the draft of the Supreme Court,” he said.

Several months ago a space for a new shrine opened up on the grounds of St. Francis of Assisi Church, which is one of the two worship sites of Sts. Mary and Martha Parish. The grounds of St. Francis of Assisi also house a grotto of Our Lady of Lourdes as well as several other statues and devotional items, said Father Lioi, who also is pastor of St. Mary Parish in Auburn and Our Lady of the Snow Parish in northern Cayuga County. The shrine is outdoors, so it’s accessible to both parishioners as well as members of the community, Father Lioi explained.

As various saints were being considered for the new shrine, Father Lioi suggested St. Gianna, a somewhat recent addition to the Catholic Church’s list of saints.

“I had suggested a more contemporary saint might be appropriate. Few people knew of St. Gianna, but because she was from Italy and St. Francis is historically an Italian parish, parishioners were very open to this possibility,” he recalled.

St. Gianna was born in 1922 in the Italian town of Magenta, which is in the Archdiocese of Milan. A pediatrician, St. Gianna practiced medicine while faithfully adhering to the Catholic Church’s teachings, Father Lioi said. She also did charity work for the elderly and worked with the St. Vincent DePaul Society, which aided the poor in her region.

“She believed in following her conscience while coming to the aid of others who required assistance,” he said.

St. Gianna and her husband, Pietro, had four children. During her fourth pregnancy, St. Gianna’s doctors discovered she had a uterine fibroid, but she refused treatment in order to save her unborn child’s life. The child, named Gianna Emanuela Molla, was born in 1962, but St. Gianna died from an infection a week later.

Pope St. John Paul II canonized St. Gianna on May 16, 2004, and both Pietro Molla and Gianna Emanuela Molla attended the canonization in Rome.

“It was the first time that a husband had ever witnessed his wife’s canonization,” Father Lioi said. “She is the first working mom and woman doctor to be canonized. She is a pro-life witness in our day and age.”

St. Gianna was not a well-known saint in 2018, when Auburn teen Juliana Grantz stumbled across a biography of the saint while doing research for a school project.

“She wasn’t like a St. Francis or St. Bernadette that everybody knows about,” she recalled, noting that she was drawn to the saint immediately. “She was … more relatable. She had some of the same struggles of our generation.”

Juliana eventually took the name Gianna as her confirmation name and later composed a song about the saint. Juliana, now 17, is already an accomplished songwriter and vocalist, and this fall she will be performing her song about St. Gianna via webcast during the City of Milan’s celebration marking the 100th anniversary of the saint’s birth.

Juliana also performed her song at the May 15 dedication of the Auburn shrine and was excited to be able to help spread awareness of her patron saint.

“I was so honored to be able to participate in this event, and I’m just so happy that they have a shrine to St. Gianna in my own (faith community),” she said.