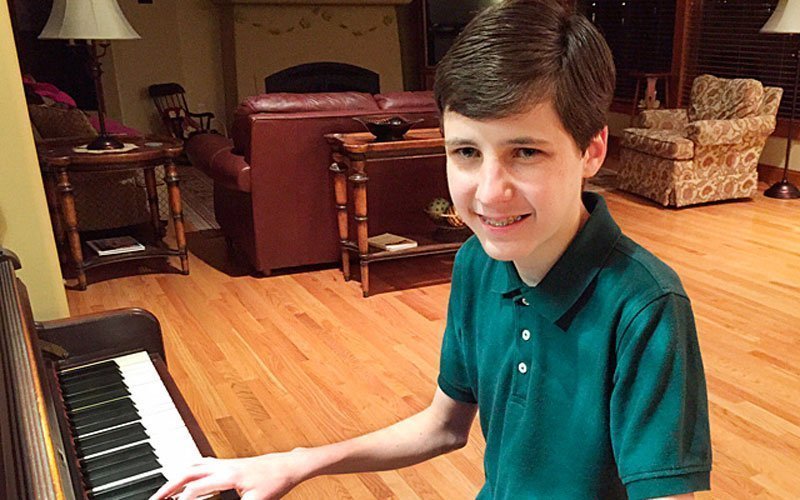 Community service is nothing new for Connor Cuthbert. The 14-year-old, who is in eighth grade at St. Joseph School in Auburn, has been volunteering regularly since he was in kindergarten.

What is a new experience for Connor, however, is receiving recognition from the community for his many efforts.

On April 21, Connor received the Auburn Kiwanis Club’s Outstanding Youth Service Award, which is presented each year to a Cayuga County resident between the ages of 12 and 19. The award honors individuals who have shown outstanding achievement in the area of service to others, according to Karen Lockwood, secretary for the Auburn Kiwanis. The Kiwanis’ goal in presenting the award is not only to honor individual recipients, but also to highlight the value of service to others. Each year Kiwanis provides a $500 scholarship to the award’s first-place winner and a $250 scholarship to a second-place winner.

Each year Kiwanis solicits nominations for the award from schools and nonprofit organizations, Lockwood said, noting that this year the judges zeroed in on Connor’s nomination letter, which was written by Jane Cooney, his English language arts and social studies teacher at St. Joseph.

“Of those (nominations) received this year, Connor’s was notable for the diversity of his volunteer activities,” Lockwood said. “It is additionally impressive that Connor is only 14. What an asset to the community.”

Cooney wrote about Connor’s work as stage manager for St. Joseph’s school play, the hours he’s spent playing piano for elderly and disabled people in an Owasco care facility, his work packing food with the Salvation Army and his efforts to obtain the grants needed to replace the benches in a local park. Connor, who belongs to St. Joseph’s chapter of the National Junior Honor Society, also has helped sell flags for the school’s Healing Fields fundraiser, through which thousands of flags are sold and displayed in Auburn’s Hoopes Park over Memorial Day weekend. Connor also has helped escort people to flags they’d purchased in memory or honor of their family members, Cooney said.

“I nominated Connor because he is a humble, quiet, unassuming person who has been serving the Auburn community and St. Joseph School for many years,” Cooney told the Catholic Courier. “I felt that he was truly an unsung hero and deserved recognition by the community for all he does. I believed his continual service for one so young has been truly remarkable.”

Connor started helping with St. Alphonsus Parish’s annual Shrove Tuesday pancake supper when he was in kindergarten, Cooney wrote in her nomination letter. That same year he and his family transformed his aunt’s garage into a haunted house, charging a small admission fee and donating the proceeds to charity. The haunted house, known as Nightmare on Anna Street, was the brainchild of Connor and his sister, Ailish, recalled their mother, Laura Cuthbert.

“He was just kind of playing around in the garage and he got the idea to make a little haunted house out of it,” Cuthbert said, noting that the haunted house at the home of her sister, Cheryl Foster, started out small. “Every year it’s gotten bigger and bigger. Now her whole driveway, as well as her back yard, is full of tents.”

A local company donates the two large tents, and Nightmare on Anna Street is open on the Friday and Saturday evenings of the two weekends leading up to Halloween, said Connor, who plays a smoke-emitting homemade pipe organ inside the haunted house. The Cuthberts charge a $2 admission fee and also request patrons bring a canned food item to be donated to the St. Alphonsus Food Pantry. Last year after the haunted house wrapped up, Connor and Ailish were able to donate more than 2,000 cans of food to the food pantry and approximately $2,000 to Golisano Children’s Hospital in Rochester and to the local Society for the Prevention of Cruelty to Animals.

“They’re very appreciative when we bring the money to Golisano and the SPCA. They definitely put the money to good use,” Connor said.

Another of Connor’s favorite service activities took place in 2012, when he accompanied local veterans on a bus trip to Washington, D.C., where he pushed the veterans’ wheelchairs and brought them food. He joined that trip at the invitation of Foster, who also volunteered on the trip. Foster, who spearheads St. Joseph’s Healing Fields fundraisers, is very active in service to the Auburn community and has motivated Connor to follow in her footsteps, he said.