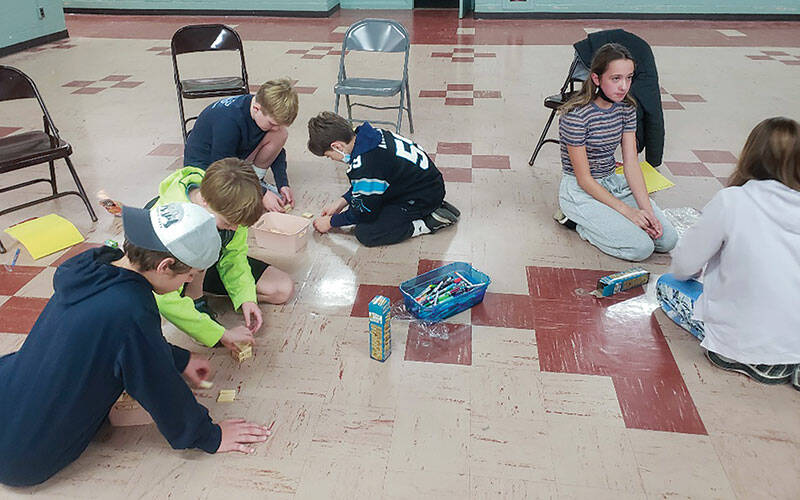 Youth-group members from Holy Family, St. Alphonsus and Sacred Heart in Auburn and St. Ann in Owasco participate in a lesson using dominoes to show how a failure to care for the earth has negative consequences for humans. (Photo courtesy of Barbara Quinn)

To the casual observer, it may have looked like the members of a local youth group were sitting around playing dominoes on a recent Sunday evening.

Not so, according to Barbara Quinn, faith-formation coordinator for the clustered parishes of Holy Family, St. Alphonsus and Sacred Heart in Auburn and St. Ann in Owasco. Rather, the teens were learning about Catholic social teaching, she said.

Before pulling out the dominoes, Quinn explained that Catholics are called to care for their environment and the living things around them. One small action can trigger a chain reaction with far-reaching consequences, much like pushing one domino down can cause a whole line of them to fall, she said. Harvesting trees from the Amazon rain forest, for example, not only eliminates the habitat of many animals, but also can trigger the long-term consequence of climate change, Quinn said.

As one of the seven key themes of Catholic social teaching, care of God’s creation made for a perfect topic to focus on during the Auburn youth group’s second monthly meeting, Quinn said. Catholic social teaching is the main focus of the youth group, so at each meeting, Quinn tries to show the teens how one of those seven key themes ties into current events.

She also explains the Scriptural basis for these themes, so at the Nov. 7 meeting, she turned to the second chapter of Genesis, when God commands humans to care for all he has created. The teens sometimes are surprised to learn that there is a practical link between the Bible and what’s happening in the world around them, Quinn said.

“We read passages in the Bible, showing them that this isn’t a new thing. You wouldn’t believe the ‘oohs’ and ‘ahs’ suddenly as we talk about it and they realize the basis in doing this was here in our Catholic faith,” she remarked. “The basis of this was founded a long time ago, and it’s spread, and it’s in the general community, and their role … as Catholics is to help promote it.”

Quinn also shows the teens what the different popes have written about issues related to Catholic social teaching, including Pope Francis’ 2015 encyclical Laudato Si’: Caring For Our Common Home.

The youth group, which currently has 12 members, is open to anyone in the seventh- through 12th grades at the clustered parishes, although most of its members this year are seventh-graders, she said. Teens around this age are just starting to take notice of the world outside of their immediate communities and to figure out where they fit into that world, so it’s important to tap into their curiosity and provide them with sound information, she said.

“They’re at that stage where they’re either going to continue or they’re going to start breaking away and questioning their faith,” she said.

Quinn typically tries to involve the teens in the planning of the youth group’s activities, she added.

“We’ll do more activities relating to care of God’s creation,” she said. “The kids will make some decisions on what they themselves can do at the community level, what they can do at the national level. There are all sorts of things that they come up with.”

Helping the teens discover ways of taking action also helps them gain a sense of control, something which is frequently lacking these days, Quinn noted. Periods of quarantine, separation and last-minute changes have become almost a way of life for teens growing up today.

“It’s a calm approach to practical things they can do in their lives. I just think it’s more necessary nowadays because they’re going through such a trying time,” she said.