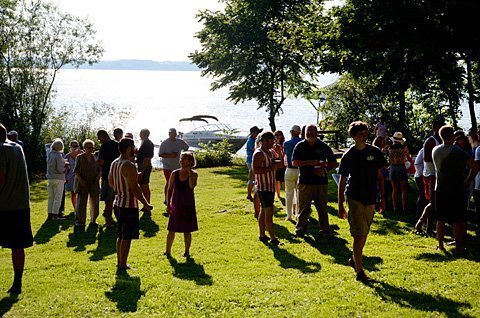 Members of St. Patrick Church and United Ministry of Aurora gather for food and drink behind St. Patrick after an interfaith boat blessing July 11.

Father Richard Shatzel and the Rev. Robert French stood on the shore of Cayuga Lake on July 11 and looked out at the dozens of boats that had gathered before them. Large cabin cruisers and other power boats lined up alongside tiny kayaks and paraded single-file before the two clergymen.

"That took maybe 15 or 20 minutes for them all to go by," remarked Father Shatzel, pastor of Good Shepherd Catholic Community in southern Cayuga County.

The boaters had gathered for Aurora’s annual Blessing of the Boats, an event that has been a fixture of the Aurora community for 12 years. St. Patrick Church, which is part of Good Shepherd Catholic Community, and United Ministry take turns hosting the blessing in the lake waters directly behind their churches, which are located just a few doors down from each other on Main Street. Spectators typically gather on the church lawns to watch the blessings from shore, Father Shatzel said, and after the blessing spectators and boaters alike head from the church that hosted the blessing to the other church, which hosts a picnic dinner complete with a jazz band. The July 11 blessing was hosted by United Ministry, so the picnic afterwards was held at St. Patrick. Twenty or 30 people gathered in the little amphitheater behind United Ministry to watch the blessing, and more than 50 came to St. Patrick for the party, Father Shatzel added.

Boaters and other members of the Aurora community participate in the Blessing of the Boats because they recognize that accidents and drownings can happen on any lake, and they want to ask for God’s protection, said Father Shatzel. The blessing also reminds them to drive their boats responsibly and to not forget about God over the summer, he added.

"It’s a reminder of God’s presence in our recreation. It puts a spiritual slant on some of the things they do during the summer. Sometimes people forget about the church and God during the summer, (but) God is still with them," he said.

The blessing and the picnic afterwards represent small-town America at its finest, noted John Miller, the event’s founder. Members of the Aurora community love the event and look forward to it every year, and many have even told Miller that it’s their favorite part of the summer.

"It’s just a delightful event that gives both United Ministry and St. Patrick’s some positive visibility in the community. That’s the whole idea, is to try to reflect our faith in a positive way in the community through an event, but also to enliven it," said Miller, who belongs to Good Shepherd Catholic Community. "We’ve just received tremendous support. It’s cool."

The community has been supportive not only of the annual event, but also of the raffle that accompanies it each year. Miller’s business contacts help him obtain one set of prime tickets to a sporting event, theater performance or opera, as well as accommodations at the nicest hotel near the event venue, and the set is raffled off during the post-blessing picnic. Miller sells tickets during the weeks leading up to the Blessing of the Boats, and after the raffle is over proceeds from the ticket sales are donated to a local charity such as a hospice organization or municipal library. The raffle has raised more than $35,000 for various charities over the years, Miller said.

The charitable aspect of the Blessing of the Boats makes the event especially appealing, noted Peter Spinelli, who owns a summer cottage in Aurora and attends Mass at St. Patrick when he’s in town.

"We’re raising money for charity and having fun at the same time. That’s really what makes it fun," he said.

Spinelli, who usually drives his 21-foot speedboat to the event, said he’s traveled quite a bit and never seen anything quite like the Blessing of the Boats.

"It kind of connects the boat people and the land lubbers, so to speak. You’ve got people in paddle boats and Jet Skis and then you’ve got some 35-foot cruisers. You’ve got some speedboats and there’s kayaks and canoes, every kind of boat imaginable," he said. "It not only brings the people of the community together, but it brings the churches together. It’s ecumenical, and that’s nice."