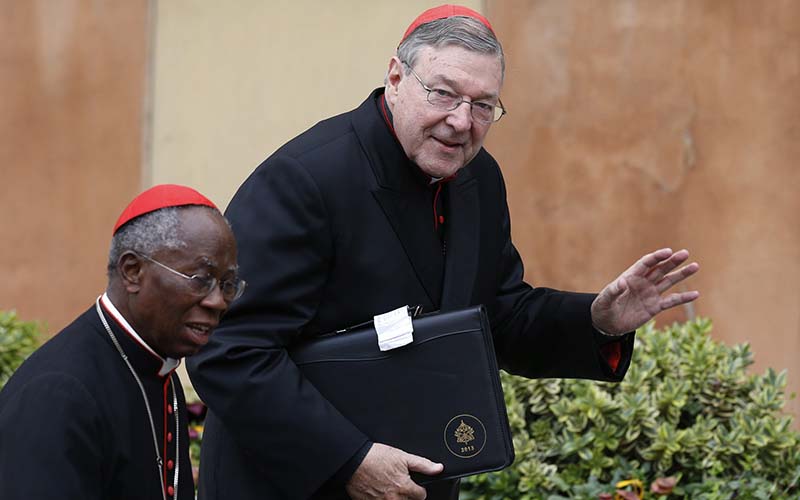 Cardinals Francis Arinze, retired prefect of the Congregation for Divine Worship and the Sacraments, and George Pell of Sydney arrive for the final general congregation meeting in the synod hall at the Vatican March 11, 2013. Cardinal Pell, former prefect of the Secretariat for the Economy and archbishop of Sydney, died Jan. 10, 2023. He was 81. (CNS photo by Paul Haring)

(OSV News) — Australian Cardinal George Pell, former prefect of the Secretariat for the Economy and archbishop of Sydney and of Melbourne, died Jan. 10 in Rome. He was 81. Sources told OSV News that Cardinal Pell went in for hip replacement surgery Jan. 10 and died of cardiac arrest following complications of the surgery.

Beginning at age 77, Cardinal Pell spent more than 400 days in jail after being convicted on five counts related to the abuse of two choir boys. In a decision handed down April 7, 2020, the Australian High Court overturned that conviction, concluding there was “a significant possibility that an innocent person has been convicted because the evidence did not establish guilt to the requisite standard of proof.”

“Thank you for your witness,” Pope Francis told Cardinal Pell during a private meeting in October 2020, six months later.

In reaction to the death of Cardinal Pell, Archbishop Anthony Fisher, OP, of Sydney posted on Facebook: “It is with deep sadness that I can confirm His Eminence, George Cardinal Pell, passed away in Rome in the early hours of this morning. This news comes as a great shock to all of us. Please pray for the repose of the soul of Cardinal Pell, for comfort and consolation for his family and for all of those who loved him and are grieving him at this time.”

“Cardinal Pell provided strong and clear leadership within the Catholic Church in Australia, as Archbishop of Melbourne and Archbishop of Sydney and as a member of the Bishops Conference for more than 25 years,” said Archbishop Timothy Costelloe, SDB, of Perth, president of the Australian Catholic Bishops Conference. “Cardinal Pell’s impact on the life of the Church in Australia and around the world will continue to be felt for many years. As we remember him and reflect on his legacy, I invite all Catholics and other people of goodwill to join in praying for Cardinal Pell, a man of deep and abiding faith, and for the repose of his soul.”

Auxiliary Bishop Richard Umbers of Sydney said in a tweet: “Larger than life, Cardinal Pell was a highly intelligent and well-read man who took a genuine interest in everyone around him. A pioneer for much good in Sydney, Australia, and the entire church. Please join me in praying for the repose of his soul. Requiescat in pace.”

According to Archbishop Fisher, who celebrated Mass for the deceased cardinal on Jan. 11 at St. Mary’s Cathedral in Sydney, a requiem Mass will take place at St. Peter’s at the Vatican in the coming days. A funeral Mass will then be held at St. Mary’s, where he will be buried in the crypt.

George Pell was born June 8, 1941, in Ballarat, Australia, to George Arthur and Margaret Lillian Pell. His father was a nonpracticing Anglican; his mother was a devout Catholic of Irish descent.

Pell attended St. Patrick’s College in Ballarat from 1956 to 1959, where he was a star player for the football team. After college, he signed with what is now the Australian Football League but then felt called to the priesthood, so began his theological studies in 1960 at Corpus Christi College regional seminary.

In 1963, Pell continued his studies at the Pontifical Urban University in Rome, and graduated with a licentiate in theology in 1967. During his final year of studies, he was ordained a priest of the Diocese of Ballarat Dec. 16, 1966, at St. Peter’s Basilica in the Vatican.

In 1971, he received a doctorate in philosophy in church history from Oxford University in England, and earned a master’s in education from Monash University in Australia in 1982. As a priest, he was assigned to various parochial and diocesan positions, including episcopal vicar for education and seminary rector at Corpus Christi.

In June 2002, Archbishop Pell stepped aside from his duties when he was accused, for the first time, of sexual abuse of a minor. A church-based investigation could not find enough evidence to corroborate the accusation, which dated back to 1961.

At an Oct. 21, 2003, consistory, Archbishop Pell was created a cardinal by Pope John Paul II. Preaching the message of Christ and clearly presenting Catholic teaching is the only way to guarantee the continued growth and fidelity of the Catholic Church, Cardinal Pell said in an interview with journalists at the time.

With his new red biretta sitting on a table crowded with microphones and tape recorders, Cardinal Pell said then that his new title would not make a great change in how he exercises his ministry in Australia.

He hosted Pope Benedict XVI in Sydney for World Youth Day in 2008.

Appointed prefect of the Secretariat for the Economy

In an interview during a media tour of the United States in December 2021, Cardinal Pell spoke to OSV about how the secretariat had helped bring transparency to Vatican finances.

Still, he added, the Vatican continues to face financial pressures. “They’ve got no debts, but in 10 years’ time there will be, unless they can really get their act together,” he said. “There will be a deficit of hundreds of millions in the (Vatican) pension fund. It’s quite a grave challenge.”

In the face of various financial scandals, Cardinal Pell told OSV that he understood why Catholics were disconcerted, and that it is important to uncover problems and clean them up. “I think good Catholics know that sin exists in the church, and we’ve all got to battle against it in our own hearts in every way we can,” he said.

In 2017, Cardinal Pell took a leave of absence from his role as prefect to return to Australia to face accusations of historical child sexual abuse. He staunchly professed his innocence throughout the proceedings that led to a Dec. 11, 2018, unanimous conviction on all five charges against him. Two days later, Pope Francis removed him from his inner circle of cardinals.

Cardinal Pell’s conviction was made public on Feb. 26, 2019. Archbishop Mark Coleridge of Brisbane, then-president of the Australian bishops’ conference, said in a statement at the time that “the news of Cardinal George Pell’s conviction on historical child sexual abuse charges has shocked many across Australia and around the world, including the Catholic bishops of Australia.

“The bishops agree that everyone should be equal under the law, and we respect the Australian legal system,” the archbishop said. “The same legal system that delivered the verdict will consider the appeal that the cardinal’s legal team has lodged. Our hope, at all times, is that through this process, justice will be served.”

On March 13, 2019, Cardinal Pell was sentenced to six years in prison with a non-parole period of three years and eight months. After 13 months of incarceration, he was released in April 2020 following his second appeal.

While in prison — eight months of which were spent in solitary confinement — Cardinal Pell authored a three-volume “Prison Journal,” the first volume of which was published by Ignatius Press in 2020.

When asked by OSV how he hoped Catholics would grow closer to the Lord through his journals, Cardinal Pell said he brought “no new revelations.”

“I just repeat that Christ’s teaching is true. I don’t know how many adults have said to me in times of suffering and trial that, ‘I don’t know where I would be without my faith.’ And we need to explain that to young people — so that in good times and in bad, if we follow Christ’s teaching, we’re almost certainly likely to have a greater measure of peace than we would if we had hatred in our heart, if we were bent on vengeance or dissipation or just following our weaknesses,” he said. “Christ has the words of truth. Not just for heaven, but Christ has the words of truth for the good human life.”

At a gathering of Catholic medical professionals in Phoenix in November 2021, Cardinal Pell related how prison helped him understand Christ’s suffering.

“Suffering accepted in faith can be good and useful. Like gold, it can be used for good purposes,” Cardinal Pell said. Reminding his audience that Jesus told his followers, “whoever does not accept his cross and follow me cannot be my disciple,” the cardinal said, “that makes it difficult for Christians.”

But, he added, “It is through his suffering and death while a powerless victim that the Lord redeemed us.”

“All this only makes sense if we accept in faith that suffering can be redemptive — turned to a good purpose when united with Jesus’ suffering and death,” the cardinal continued. “It is through his suffering and death while a powerless victim that the Lord redeemed us; released the grace so that our sins and the worst crimes could be forgiven.”

Outspoken defender of the faith

Cardinal Pell was an outspoken defender of the faith in an increasingly secularized society. In the 2021 interview with OSV, he said, “We need to be talking with our politicians, reminding them of the importance of religious freedom indistinctly.

“We’ve got a broader intellectual challenge, and that is to defend the concept of truth,” he said. “Because if there’s no such thing as truth, where we can speak accurately of reality — that there’s only my truth and your truth — then, of course, there’s not much purpose in debating and discussion. So I think for the next decades, in our type of society, one of the roles of the church will be to protect and defend the notion of truth.”

Cardinal Pell gave one of his last on-the-record interviews to OSV News on Dec. 31, 2022, in which he commented on the death of Pope Benedict XVI on that same day.

The world lost “a wonderful man. A very kind man,” Cardinal Pell said in the interview. “I’ve seen him regularly since I came back to Rome to talk about the life of the church and many things. So I will miss him.”