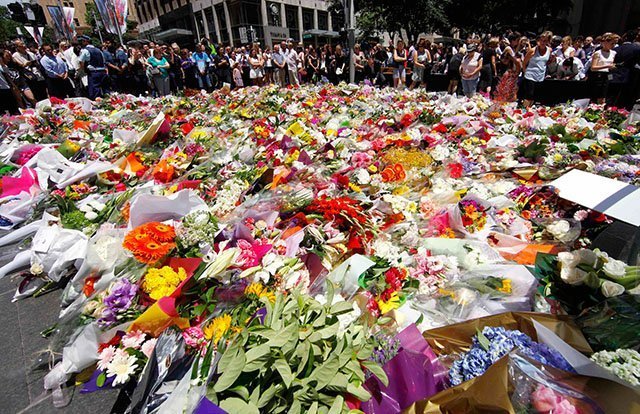 Members of the public look at thousands of floral tributes placed Dec. 16 near the Sydney cafewhere hostages were held for more than 16 hours. An Irish priest based in Sydney said he was amazed at how many people turned to prayer during the deadly siege.

SYDNEY (CNS) — Hell has touched Sydney, but the darkness let loose on a terrorized city cannot overcome the light of Christ, the city’s archbishop said at a special Dec. 16 Mass after a lone gunman took 17 people hostage in a cafe, killing two before being shot by police.

The atmosphere in St Mary’s Cathedral, Sydney, was somber as government leaders arrived for the special Mass. Among those in attendance were Peter Cosgrove, governor general of Australia, and New South Wales Premier Mike Baird.

"Today the heart of our city is broken by the deaths of two innocent ‘hostages’ along with their tormentor, the injuries of four others and trauma to many more," Archbishop Anthony Fisher said in his homily before the hundreds, Catholic and non-Catholic, who had gathered to pray.

"We went to bed hoping to wake to good news. But despite patient efforts to maintain calm and negotiate, there were, in the early hours of this morning, flashes of gunfire, intervention by our police to save lives, merciful escapes, but finally death.

"Hell had touched us."

The cafe’s manager Tori Johnson, 34, was reported to have tried to wrest the gun off the self-styled Iranian cleric Man Haron Monis, but was fatally shot in the process.

Katrina Dawson, 38, a mother and respected barrister, was killed while trying to shield her pregnant friend.

"These heroes were willing to lay down their lives so others might live, imitating the sacrifice of Christ, who said that there is no greater love than to lay down one’s life for another," Archbishop Fisher said.

The first instance of its kind in Sydney threatened to "harden our hearts," the archbishop said, with the risk "that we become cynical, suspicious of our neighbors, or worse, that we turn on them."

But he said that "the darkness need not overcome the light," as witnessed by the calls for calm from a multitude of different religious, ethnic and political leaders; the spontaneous tributes appearing in Martin Place, where the incident occurred; and the instinct to unite in praying to God.

"Indeed, the Christmas-Easter-Christian message is: It cannot! There is something greater than hatred and violence. There is love, that humble, self-donative love that comes in the shape of the Christmas babe, the prince of peace."

Archbishop Fisher reminded the congregation that the ostensibly peaceful birth of Jesus occurred against a background of darkness, with the Gospel accounts showing "all was not quite as it ought to be."

"There’s suspicion about the pregnancy; the husband considers divorcing his wife; a mother nearing labor is required to travel a great distance; there’s no room at the motel for them; the child is delivered in the squalor of a cowshed; in the temple the proud parents are warned of trouble ahead; the family must flee as refugees to a strange land; meanwhile the king’s men kill the rest of the little children," the archbishop said.

"Christ is threatened from the moment of his birth until the violence of this world finally catches up with him on the cross," Archbishop Fisher said.

"And our world today is every bit as mixed up as it was at the first Christmas. There’s plenty of talk of human rights, the dignity of the person, equal respect and care. We are replete with resources, technology and know-how to help people through troubled times.

"Yet innocent people are threatened the world over, and a little bit of what is commonplace in the region of Christ’s birth has even come to Martin Place. Christmas, we think, is supposed to be different — but in a sense it was always like this."

Many would be wondering why God allowed the siege to happen, something Archbishop Fisher said was a function of a misuse of people’s God-given free will.

"The God who saves still leaves men free. They choose whether to be of good will or not," he said.

"The Christ-child proposes peace, again and again; he gives us the wherewithal to be reconciled and live peaceably with our neighbors; but in the end we choose whether to live in his kingdom, by his values," he said.