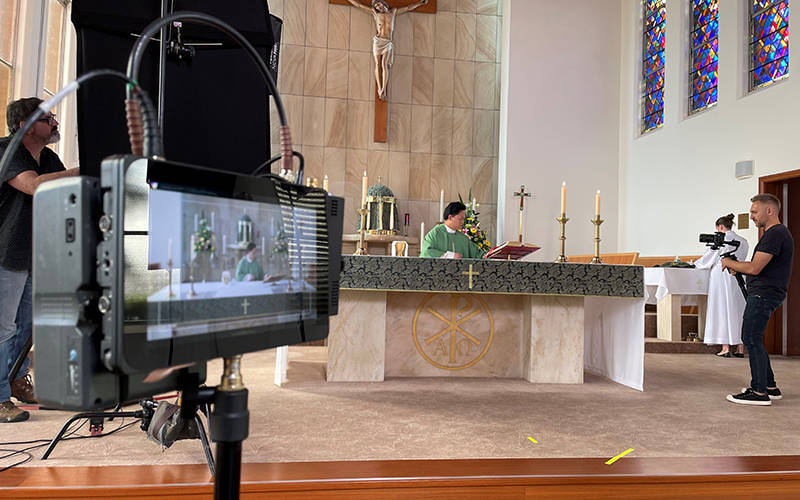 Production crew members record “Mass For You at Home,” celebrated by Father John Paul Escarlan in St. John Vianney Co-Cathedral in Wollongong, Australia, during the latest COVID-19 lockdown Aug. 1, 2021. After 50 years of broadcasting, the Mass has become the longest-running program on Australian television. (CNS photo by Giovanni Portelli/The Catholic Weekly)

Celebrating its 50th year in early August, “Mass For You at Home” was originally aimed at those unable to attend their local parish due to illness, infirmity, being homebound or in prison, but today has attracted a new audience due to COVID-19, and its small but loyal following is flourishing since churches were forced to close.

With a national emergency currently declared across New South Wales and large numbers of the country’s most populous state in lockdown indefinitely due to an outbreak of the delta strain, the program is more relevant and popular than ever.

And it’s not just Catholics tuning in; producers are receiving increasing numbers of requests from non-Catholics wanting more information about the faith after watching a Mass.

Filmed at Fairy Meadow’s St. John Vianney Co-Cathedral in the Diocese of Wollongong, south of Sydney, the broadcast has come a long way since the first Mass was recorded in a television studio featuring fake stained-glass windows and a recorded choir in August 1971.

Today, produced by the Diocese of Wollongong in partnership with the Australian Catholic Bishops’ Conference, it features state-of-the-art technology as well as signers for the deaf community. Wollongong Bishop Brian Mascord said that while much has changed in the 50 years since it was first broadcast on free-to-air television, the need for the Mass remains.

He said over the five decades, hundreds of priests and laypeople contributed to the ministry’s history by celebrating Mass, reading Scripture and singing.

“Father Michael King’s vision from the early 1970s was to provide spiritual nourishment to the housebound, and that is still relevant today,” he said.

“To bring a real sense of the sacred to people, inviting them to be part of a scattered yet connected worshipping community is a privilege and a great responsibility that we take seriously,” he said, adding diocesan staffers were “humbled by the letters, emails and calls we receive from our grateful community.”

Cramsie is a writer and commentator for The Catholic Weekly.