Australian nun among those killed in plane crash - Catholic Courier 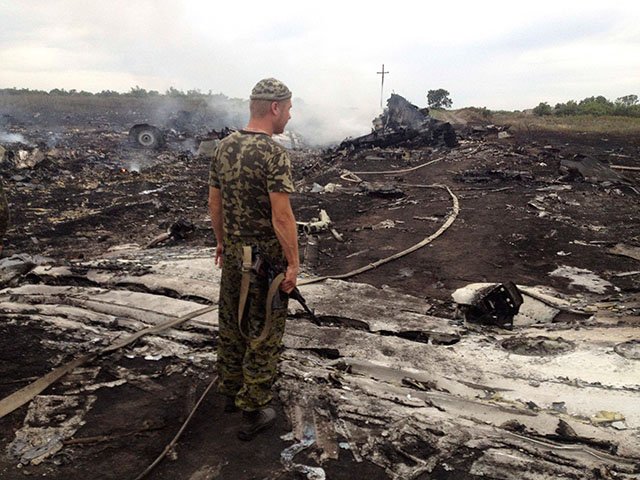 An armed pro-Russian separatist stands at the site of a Malaysia Airlines Boeing 777 plane crash July 17 in Grabovo, Ukraine. It is believed all 295 people aboard died in the crash.

VATICAN CITY (CNS) — Though exactly what happened to Malaysian Airlines flight MH17 remained unclear, Pope Francis offered prayers for the 298 passengers and crew members who died when it came down in eastern Ukraine.

According to Australian news reports, as many as 108 of those who died July 17 were on their way to Melbourne for the International AIDS Conference. Also killed was Sacred Heart Sister Philomene Tiernan, a member of the staff at Kincoppal-Rose Bay School, a Catholic girls’ school in Sydney.

"The Holy Father, Francis, has learned with dismay of the tragedy of the Malaysian Airlines aircraft downed in east Ukraine, a region marked by high tensions," said a statement July 18 from the Vatican press office. "The pope raises prayers for the numerous victims of the incident and for their relatives, and renews his heartfelt appeal to all parties in the conflict to seek peace and solutions through dialogue, in order to avoid further loss of innocent human lives."

Given the ongoing tensions between Ukraine, Ukrainian separatists and Russia, and reports that the plane was flying at 33,000 feet, it was widely believed the plane was shot down.

Regarding the death of Sister Tiernan, the school principal sent a message to parents confirming the news and saying, "this has come as an enormous shock to me and our school community."

"I heard from Phil yesterday morning," when the nun was still in France, wrote the principal, Hilary Johnston-Croke. "She told me that she had left Joigny, where she had been attending a retreat," and had gone to Paris to venerate the remains of St. Madeleine Sophie Barat, founder of the Society of the Sacred Heart, "which was a very special moment for her."

"We are devastated by the loss of such a wonderfully kind, wise and compassionate woman who was greatly loved by us all. She was a great friend and mentor to me personally," the principal said.

The Archdiocese of Sydney announced that a special memorial Mass for all of the victims would be celebrated July 20 in St. Mary’s Cathedral. Australia’s governor general and prime minister were scheduled to attend the Mass.

In Melbourne, as representatives of faith-based groups caring for people with HIV/AIDS held a pre-conference to the international AIDS meeting, they began their work with prayers for the victims.

The White House press office released a statement July 17 offering the country’s condolences to the victims and their families.

"It is critical that there be a full, credible, and unimpeded international investigation as quickly as possible," the White House statement said. "We urge all concerned — Russia, the pro-Russian separatists, and Ukraine — to support an immediate cease-fire in order to ensure safe and unfettered access to the crash site for international investigators and in order to facilitate the recovery of remains."