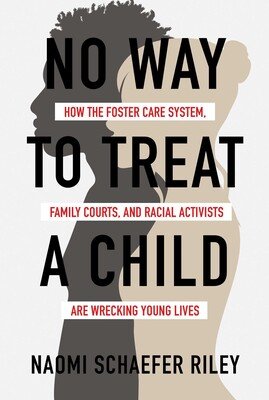 This is the book cover of No Way to Treat a Child: How the Foster Care System, Family Courts and Racial Activists Are Wrecking Young Lives" by Naomi Schaefer Riley. The book is reviewed by Regina Lordan.

In “No Way to Treat a Child: How the Foster Care System, Family Courts and Racial Activists Are Wrecking Young Lives,” journalist and author Naomi Schaefer Riley exposes the deficiencies of a complex and misguided foster care system in America.

Using a combination of research, data and firsthand interviews as evidence, Riley argues that the foster care system does not prioritize the well-being of neglected and abused children.

Instead, she writes, the system upholds biological family reunification and adult wants and needs as paramount to children’s safety. A confused and secular ideology often prevails over creative, technological solutions and faith-based organizational input and involvement.

This results in a perpetually harmful reality that continually puts the most vulnerable children in danger.

As a senior fellow at the American Enterprise Institute, Riley’s writing and research has focused on issues regarding child welfare and families. In addition to editorial and contributing roles at the New York Post, The Wall Street Journal, The New York Times, The Boston Globe and The Washington Post, she also appears regularly on Fox News, Fox Business and CNBC.

Among other topics, she writes about parenting, education, religion, family and culture.

Riley’s arguments in “No Way to Treat a Child” will resonate with some and anger others. But importantly, and regardless of the readers’ knee-jerk reaction, her writing will certainly crack open and expose the flaws of broken system that harms those whom it was built to protect.

In the book, Riley writes that more than 800,000 children have been removed from their homes due to reported and verified abuse or neglect. Biological parents typically are not criminally charged.

State policy, family courts and caseworkers prioritize family reunification, meaning that rehabilitation and assistance to the abusing or neglectful biological parent is provided and monitored.

Biological parents are given what they need for a second, third or fourth chance at providing a home for the return of the removed child or children.

In certain circumstances, family reunification is even deadly. According to a report from the Pennsylvania Department of Human Services documented in the book, “between 2014 and 2016, fatalities and near fatalities resulting from child abuse increased by 44%. … Significantly, the report found … nearly two-thirds (64%) of the children and/or families were involved with the county children and youth agency prior to or at the time of the incident.”

Riley’s disgust and shock with her findings are apparent in her use of comparison between spousal abuse and child abuse. American society has come to the general cultural acceptance and expectation that victims of spousal domestic abuse must not return to their abusers.

And yet it is accepted and supported policy to reunite children with their abusers.

Furthermore, Riley asserts that when parental reunification is prioritized, the government’s role is expanded beyond child welfare “because now it is responsible not only for the well-being of the child but also for the good behavior of the adults.”

An already overburdened system is further stretched by resource and dollar.

Riley also discusses at great length how ostracizing important faith-based organizations and institutions from being a part of the solution has come at a great cost.

Riley is not shy explaining her diagnosis of the problems of the foster care system. She devotes pages to inform readers about the effects of substance abuse on families, the poor training and qualifications of child protective services workers, and the dangers of racialized ideology on policy and practice.

However, Riley doesn’t leave readers with all doom and gloom. She revisits once-disregarded solutions and offers newer, creative suggestions to help fix the problems she describes.

For example, she asks readers to consider the use of big data and computer-generated predictive behavior analysis as a possible preventative for reunification.

Once past the tedious discussion of dangerous and obvious realities of such a solution, such as false and anonymous tips, Riley does dig deeper into examples in which the idea has been attempted.

Riley also recommends that group homes can be a possible solution for children in foster care. Known as congregant care, these homes historically have become easy targets of policymakers.

Although the existence of congregant care facilities has been reduced, regardless of true necessity to do so, the children in foster care placement has not reduced in number. These children still need a safe place to go, and the alternatives provided by the system are not satisfactory.

What will be satisfactory, she concludes, is putting children’s safety above all adults’ needs, wants and wishes. And until the foster care system gets to that point, Riley says, it will continue to be part of the problem and not the solution it was intended to be.

Lordan, a mother to three young children, has master’s degrees in education and political science and is a former assistant international editor of Catholic News Service. She currently teaches and is a court-appointed advocate for children in foster care.