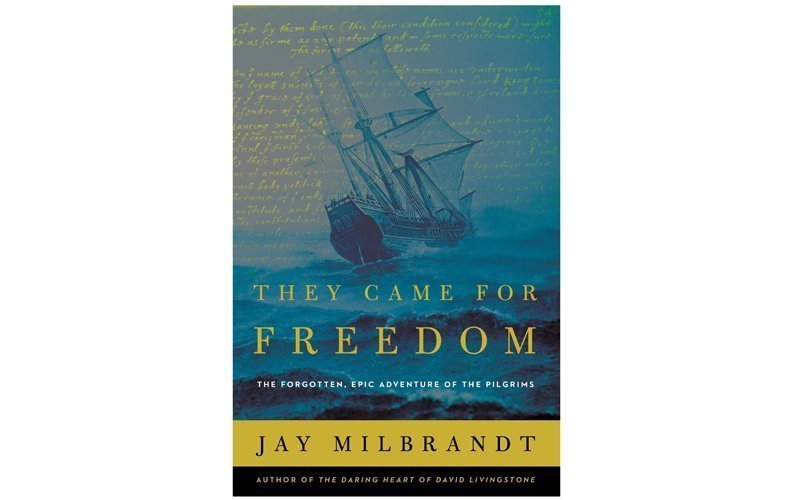 This is the cover of "They Came for Freedom: The Forgotten, Epic Adventure of the Pilgrims" by Jay Milbrandt. The book is reviewed by Nancy L. Roberts. (Photo by CNS)

This account of the Pilgrims’ daring adventure at Plymouth in present-day Massachusetts explores contradictions such as their passion for their own religious freedom — yet persecution of those who did not share their beliefs.

Jay Milbrandt puts flesh on the bones of the oft-told tale of our Pilgrim forebears, giving a readable and nuanced interpretation of their struggles and triumphs.

“They Came for Freedom” commands attention with the opening description of the persecution the Pilgrims faced in Elizabethan England. Two of their leading pastors were executed for heresy against the Church of England, but not before a dramatic series of twists and turns alternately unsealed and sealed their fate. Milbrandt, the consummate storyteller, transports us to Newgate Prison and then to the horse-drawn carts that deliver the two apostates to the Tyburn Tree gallows.

This blow devastates the Pilgrim separatists but braces their resolve to seek a home where they can openly live their religious beliefs. Ultimately of course, this quest leads them to the New England coast after a perilous sea journey. Milbrandt captures the trauma the voyagers faced from fierce storms, one of which cracked the main deck beam and had to be delicately repaired in the middle of the churning Atlantic.

During that first harsh winter (1620-21), Milbrandt writes, “Death erased entire families.” Pneumonia, tuberculosis, scurvy and starvation were the culprits. By March, 13 of the original 18 wives perished, and only five of the single men survived. Half of the Mayflower’s crew died, delaying the ship’s return to England. Disease and malnourishment took their toll and soon just a handful of still-healthy settlers was left to care for the larger group of the bedridden.

Some four months after landing at New Plymouth, the Pilgrims made wary acquaintance with the Wampanoags, whom they had heard in the woods. For their part, the Native Americans also had some trepidation about the settlers, since for about a decade before the separatists arrived, ships from England and other European countries had sometimes captured Indians, selling them into slavery. They were made to learn European languages and then exploited as guides on subsequent return voyages.

And the Indians also were wary because European visitors had already brought devastating plagues. One was leptospirosis, transmitted by rats that arrived regularly on the ships of European explorers and then contaminated water supplies. Its victims suffered severe cramping and pain, along with telltale bleeding from the nose.

Milbrandt, a professor at Bethel University in suburban St. Paul, Minnesota, also is the author of “The Daring Heart of David Livingstone.” He offers many insights into how circumstances led the Pilgrims, at least initially, to forge mutually beneficial, diplomatic ties with the Wampanoags. The Pilgrims were starving during that first winter, and these Native Americans had lost many of their own in the plague. They needed help against their rival tribes, the Pequots and the Narragansetts, who greatly outnumbered them. A harmonious relationship based on mutual needs ensued, at least for a time.

One of the most compelling sections characterizes important Native American figures such as Squanto, Samoset and Massasoit. They emerge as fully limned human beings. For instance, here is how we first encounter Samoset:

“On March 16, (1621), a tall young man strode confidently out of the woods and across the land cleared between New Plymouth and the trees. His long, jet-black hair shimmered in the sun, draping down his uncovered shoulders to his nearly naked body. He wore only a small leather apron and carried a bow and two arrows.

“The Pilgrims looked on in shock as he walked through the New Plymouth gates and onto the village street. Men fumbled with their muskets; other villagers froze in disbelief. ‘Welcome,’ he said in English, approaching a group of stunned Pilgrim men. He spoke freely, with broken but comprehensible English. And he came in peace.”

As he does throughout, Milbrandt puts us right there, in the center of the action. Importantly, his storytelling never comes at the expense of historical accuracy. “They Came for Freedom” is well researched among essential sources such as William Bradford’s “Of Plymouth Plantation,” the colony leader’s authoritative history.

Milbrandt explains that he is careful to “avoid conjecture except for a few places in Squanto’s early story where some speculation is required.” He also includes detailed footnotes to explain “any statements where I am suspicious of the truth or where mild speculation is made to fill gaps.”

He also is transparent about when he modernizes English to enhance readability (for example, using “belongs” rather than “belongeth”). The result is a scrupulously accurate narrative that engages on every page.

At the end, we are left with a visceral grasp of the challenges, joys, and sorrows of the Pilgrims’ epic adventure. Perhaps most poignant is the final portrayal of Governor William Bradford, as an elder in 1644. He “sat by the fire in the corner of his small home; his gray hair draped down to his shoulders. A kettle hung by a chain over the blaze, boiling water for dinner. He stood up, put on his coat, and stepped out on New Plymouth’s main dirt road.”

Bradford, we are told, is on his way to meet with the young men of the New Plymouth church, hoping to inspire them to continue to embrace their elders’ religion: “He wanted to preserve the journey of the Pilgrims for generations to come, to survive him and whatever may come to pass.” The narrative’s last pages leave us contemplating this familiar struggle of each generation to preserve its legacy.

Roberts directs the journalism program at the University at Albany, State University of New York, and has written two books about Dorothy Day and the Catholic Worker.