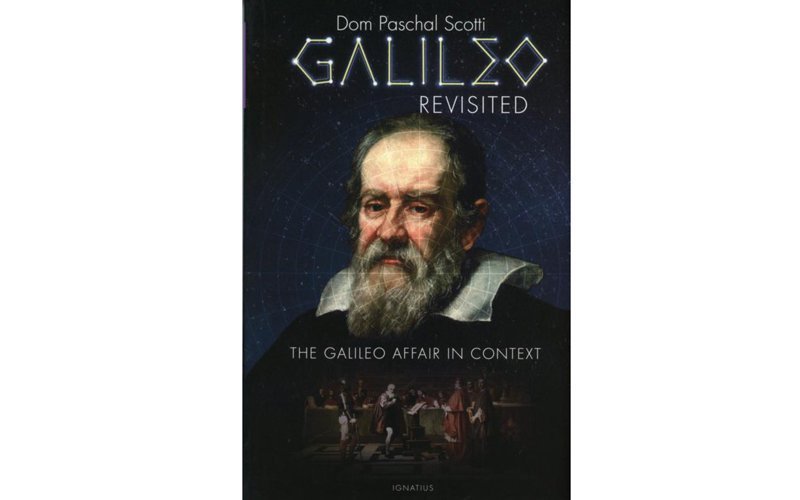 This is the cover of "Galileo Revisited: The Galileo Affair in Context" by Dom Paschal Scottie. The book is reviewed by Brian Welter. (Photo by CNS)

In addition to its humanism, which “changed the whole culture with a new attitude toward research in general,” Rome hosted a lively, even turbulent, intellectual scene. It featured stoicism, Aristotelianism, Platonism and glimpses of new science, particularly Copernicus’ idea that the earth revolved around the sun.

Adding to this turbulence, the various religious orders, particularly the science-oriented Jesuits and the more contemplative Dominicans, vied for intellectual leadership of the Catholic world. The two orders emphasized different aspects of theology: “The Jesuits put far more emphasis on human freedom while the Dominicans stressed divine omnipotence.”

If Galileo was to succeed in his attempt at remaking science and mathematics, he would have to please Jesuits, Dominicans, cardinals, local political leaders such as Florence’s Medici, and the pope. The author’s biographical sketches of these individuals make the book interesting and accessible even to readers unfamiliar with the period.

Readers get a sense of the inevitability of the old Aristotelian world passing into the new, science-centered one, reflected in Galileo’s impatience with his opponents. His personality, as Father Scotti captures things, was anything but diplomatic. Those apprehensive about the effects of the new science on theology pushed back with a vengeance, and Galileo ended up getting the worst of it.

The entire Galileo affair, the author shows, pivots on the scientist and his former friend, Maffeo Barberini, who became Pope Urban VIII in 1623. More particularly, it centers on the pontiff’s extreme anger and vengeance stemming from his feeling that Galileo had betrayed him. The scientist was anything but innocent in this, as he had been warned what he could and could not say. Father Scotti succeeds in correcting much of the anti-Catholic propaganda that darkens the truth around this whole series of events while never minimizing the unreasonable nature of this papal vengeance.

It wasn’t Galileo’s science so much as his theology that got him into trouble. This was decades in the making. On All Souls’ Day 1612, two decades before the infamous trial, the Dominican Niccolo Lorini “spoke out against Galileo and the Copernican doctrines as a violation of Scripture.” In a famous letter in 1613, Galileo unwisely “enunciated his principles of biblical interpretation in reference to science,” something that, with no theological training, he had no authority to do.

There was nothing in these musings that hadn’t also been said by theologians, but “at this time, it was a dangerous game to play with Scripture, and Galileo had been warned of this.” The “dangerous time” was the aftermath of the Reformation and the Council of Trent, when the church sought doctrinal clarity and tended to react aggressively against anyone it saw as a threat to its teaching. The author’s background to all of this helps readers see why the Galileo affair erupted at this point in church history.

Galileo’s “The Dialogue of the Two Chief World Systems” (1632), a product as much of his humanist culture as of his mathematical and scientific learning, ultimately sealed the scientist’s fate. After getting approval from several ecclesiastical authorities for parts of the first draft, things went downhill upon its publication. Galileo’s use of the fool Simplicius in the dialogue to express the pope’s position infuriated the latter.

Father Scotti goes through every stage of the trial, as well as its toll on Galileo’s health. Pope Urban comes out as the villain for wanting Galileo’s “humiliation to be complete and to generalize the condemned opinion.” Galileo was forced to back down completely and to sign a confession. Pope Urban exercised more control over the Roman Inquisition (also known as the Holy Office) than any previous pope, and was most responsible for the humiliation of the great scientist.

Ultimately, readers are left with the impression that while Galileo was undeserving of this treatment, the church was never the enemy of science as is so often portrayed. Quite the opposite: The church was the center of the scientific world at the time, its Jesuit scientists the best of the era. The Galileo affair was more about individual personalities than religion vs. science.