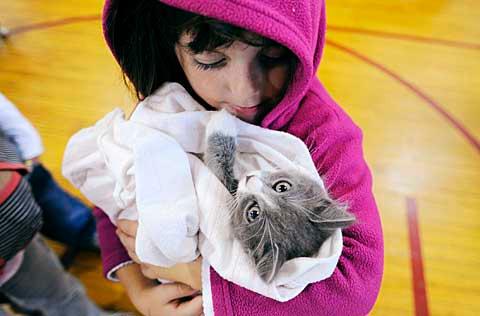 AVON — At 120 pounds and covered in a carpet of long, thick blond fur, Temba the 18-month-old Tibetan mastiff towered over most of the other animals at St. Agnes School’s pet blessing Oct. 4.

Owner Anne Aguirre noted that Temba is a valuable contributor to the family’s farm; he and the family’s other Tibetan mastiff patrol the farm at night, barking and keeping coyotes and other predators at bay.

Temba also relishes a role as the protector of the family’s four boys, three who are students at St. Agnes School.

"He’s fun to play with," said Aiden Aguirre, a third-grader at the school. "We play, and he goes where we are; he chases us."

At the pet blessing, Temba had another job: representing livestock and other large animals beloved by the students of St. Agnes. Families often bring such large animals as horses, goats and sheep to the outdoor blessing, but this year rain forced the event indoors, said Principal Gerald Benjamin.

Yet the indoor event still featured a wide variety of animals, including dogs, cats, bunnies, goldfish and hamsters.

"Today we are celebrating the artistry of God in nature as witnessed by all these wonderful creatures you have brought for Father (Richard) Beligotti to bless," Benjamin said.

After the blessing many families spoke about the important role that their animals play in their lives. Animals also were held in high regard in the Bible, noted Father Beligotti, an assisting priest of the St. Agnes, Avon; St. Paul of the Cross, Honeoye Falls; and St. Rose of Lima cluster. He noted that during the great flood, God saved not only Noah and his family but two of every creature.

"That’s what we celebrate: how God manifests — shows himself — in all of his creatures," Father Beligotti said.

Several families told stories of how they themselves had saved animals. That was the case with One-Eyed Gerry, a rescued cat who was blessed at the event.

"She’s a stray who showed up on our porch in the middle of winter," said Dixon Robin, 11, a sixth-grader at the school.

The family took pity on the feline, fed her and took her to the vet, who told them that it appeared the cat had suffered a severe infection in her eye, and the eye had been removed by another vet. He also was able to tell them the correct sex of the cat, which is why she is named Geraldine, rather than the family’s original choice of Gerald.

Mom Helena Robin said Gerry shows her great love and affection for her adopted family members by bringing them offerings of dead animals. She said Gerry has been able to teach her children important life lessons.

"Our pets are one of God’s blessings to us, to teach us happiness and companionship, and it teaches kids that they need to care for things other than themselves," Helena Robin said.

"We got them because grandma was sick with cancer, and we decided to get bunnies to comfort them during a hard time," Welch noted.

Pets also bring their families joy. That was the case with Charlotte, who adopted the Brinkerhoff family about five years ago.

"We found her in our back yard," said 11-year-old Will Brinkerhoff. "Because she’s a rescue, she’s a lot nicer than any other dogs that I’ve had. She’s always playing around."

Mary Beth Brinkerhoff, Will’s mom, noted that Charlotte loves playing ball, hurtling off a dock into water and licking faces to wake up people from naps.

"We think God sent her to us," she said.