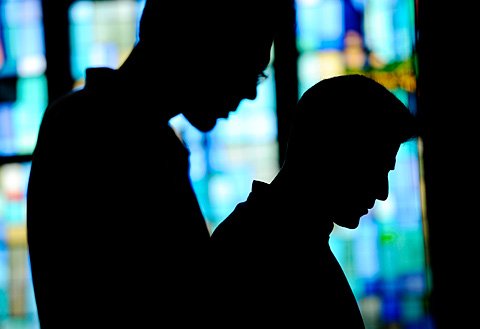 Anthony Amato (left) and Jeffrey Chichester, who are in priestly formation for the Diocese of Rochester, pray during an April 2012 Mass at St. Thomas More Church in Brighton.

In 2006, Father William Coffas launched an initiative in which each church in Tioga County’s Blessed Trinity/St. Patrick — where he was serving as parochial vicar — would "adopt" a diocesan seminarian, offering prayerful support and notes of encouragement. Problem was, at that point there were fewer seminarians in the entire Diocese of Rochester (five) than churches in his coverage area (six).

Times have changed, and dramatically at that.

Some 20 men are currently in priestly formation for this diocese, with three of them due to be ordained this June 22 (see story on page A2.) This marks the largest local ordination class since 1998, and equals the total number of ordinations in the previous five years combined.

Carol Dady, diocesan coordinator of priesthood vocations awareness, noted that this development is part of a rising interest in priestly vocations nationwide — but even so, she said the local increase has been especially sharp. Father Coffas, who now serves as rector of Becket Hall, the diocesan pre-theology discernment program, believes a more aggressive marketing of the priesthood by priests and laity has been pivotal in the turnaround.

"There have been many people, from the Pastoral Center to Becket Hall to the parish level, who are taking the ministry of vocations awareness very seriously," Father Coffas said, adding that God’s influence also plays a major role: "When heaven and earth work together, we are getting a wonderful result."

Father Timothy Horan, diocesan director of priesthood vocations awareness and discernment, agreed that this resurgence is being guided from above.

"We’ll never know, really, why God’s grace has waited until this time," he remarked.

Getting the story out

Coupled with a steady decline in priestly vocations in the United States since the 1960s, the clergy sex-abuse crisis of the early 2000s marked what many considered a low point for the priesthood. Father Coffas, who was ordained in 2004, acknowledged that "in recent years the church has gone through difficult days" in the scandal’s aftermath — yet he said he also views that period as an opportunity for the Catholic Church to show its resiliency.

Similarly, Father Horan said "the depressing feeling was everywhere" a few years ago but that feeling stoked his determination to publicly stress the many positive aspects of priests and the priesthood.

"That story needed to get out," said Father Horan, who has been in his vocations-awareness position since 2003 and also is pastor of Holy Trinity Parish in Webster.

"I don’t think young people were exposed to that (positive story) enough," Dady said. Father Coffas added that he was motivated to erase an existing perception that lay ministers could adequately compensate for the thinning ranks of priests.

Diocesan officials had already taken a significant step in 1999 by creating an Office of Vocations Awareness. Father Coffas lauded Father John DeSocio and Patricia Finnerty, the pioneering team in that initiative, for laying important groundwork for what he called "a culture of vocations."

The culture is currently fostered by a seven-person vocations-awareness team comprising both priests and laypeople. In addition, Fathers Horan and Coffas work in tandem with Father Paul Tomasso, who in 2012 succeeded Father James Schwartz as director of seminarians. The vocations-awareness effort also employs a marketing approach encompassing social media, videos and a website (www.dor.org.index.cfm/vocations).

Father Horan noted at least one major payoff from these efforts, saying that Dady — who has been in her position since 2004 — was the key follow-up person on a tip that men in vocations-rich Colombia might be willing to study to permanently become priests of this diocese. That possibility became reality beginning in 2009, and there currently are nine Colombian natives here on student visas, preparing for the diocesan priesthood.

Father Coffas observed that one-on-one appeals also can bring significant results, and for that reason he urges Catholics to ask anyone they feel has priestly qualities if he has ever considered the priesthood. By promoting vocations in their home parishes, three current seminarians inspired a member from each of those parishes to begin discernment, he noted.

Among other contributing factors, Father Horan credited Blessed Pope John Paul II’s pontificate as "a huge reason" for the current local interest in priestly vocations, noting the late pope’s penchant for "inviting people to follow Christ and not be afraid."

In addition, Father Coffas observed that Bishop Emeritus Matthew H. Clark endorsed all the current vocations-awareness initiatives and has consistently made himself available over the years to speak with and encourage prospective priests.

This diocese’s focus on attracting priestly vocations is evident to at least two of the Colombian men in formation.

"I am seeing that people are praying for vocations, and the diocese is working hard," said Jainer Erick Viloria Romero, who is serving his pastoral year at Rochester’s Peace of Christ Parish.

"Obviously the vocation is a gift, but if you don’t talk to the people who have this vocation, you’re not going to get this for your church," added Camilo Aguilar Garcia, who resides at Becket Hall.

Dady noted that four men are currently discerning at Becket Hall, and five more have applied to enter priestly formation in the fall of 2013. However, she and Father Horan emphasized that they don’t sacrifice quality for the sake of numbers, pointing out that each man discerning the priesthood is tested and screened extensively to ensure he has the potential to achieve the ideal described by Father Coffas: a "holy, happy and healthy priest."

"We get to know them very well," said Father Coffas, who resides with discerners at Becket Hall while also serving as sacramental minister at the Brighton parishes of St. Thomas More — where Becket is located — and Our Lady Queen of Peace.

Dady added that Rochester’s required six-year commitment for men in formation — one year at Becket Hall, four at a major seminary and one pastoral year — is more extensive than prerequisites for many other dioceses. And such lengthy preparation isn’t cheap: The spike in local seminarians — combined with a per-year cost of $40,000 to $50,000 to the diocese for educating each seminarian — was a primary reason the diocese launched the "Our Legacy, Our Future, Our Hope" capital campaign, which also benefits pension funding for retired priests. The campaign, which is scheduled to conclude later this spring, had raised approximately $12 million toward its overall goal of $14 million as of late April, according to David Kelly, associate director of the diocesan department of Stewardship and Communications.

Father Horan, for one, considers the large diocesan investment to be highly worthwhile. He called the group of men currently pursuing Rochester’s diocesan priesthood "a mature, savvy group of guys" — an opinion shared by Deacon Michael Costik, who will be ordained a diocesan priest June 22.

"The only thing better than the increasing numbers is the fact that the quality of these guys is so great. We are blessed," Deacon Costik said.

Deacon David Tedesche, who will soon be ordained along with Deacon Costik and Deacon Peter Mottola, said he hopes the positive momentum continues "and even picks up. During my ministry, I hope to contribute as much as I can to encouraging priestly and religious vocations in the diocese."

Even though the Colombian connection will soon conclude — Dady explained that the original agreement with Colombian dioceses was for no more than 10 seminarians from that country — she describes a "snowball effect" that may well sustain a continued surge of local vocations.

Father Horan agreed that the current positive climate is "infectious," although he warned of jumping the gun, given that several rigorous steps await men expressing interest in the priesthood before they’re ordained.

"To have an uptick for two or three years is a little too soon to be announcing victory," he said. "Time will tell. If numbers are holding steady five or 10 years from now, I think we could point to a wave of renewal."

On the other hand, Father Horan acknowledged that the Rochester Diocese is unquestionably headed in the right direction.

"We’re very, very hopeful, and very humbled by what seems to be happening here," he said.