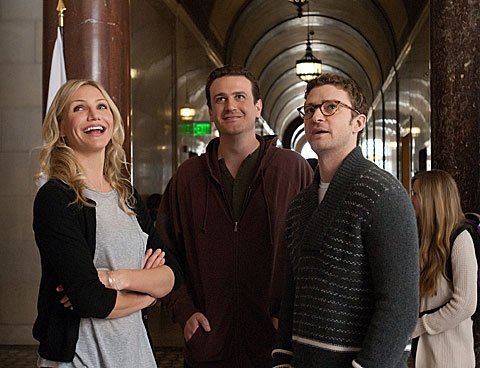 What differentiates the low-grade movie — without at all rescuing it from the depths of coarseness — is that the title character is female, purposefully incompetent, and fully cognizant of being ethically bankrupt. In addition, only a token effort is made to redeem her. All in all, the tawdry exhibition fails to shock, subvert, or entertain.

At the outset, Elizabeth Halsey (Cameron Diaz) eagerly gives up her teaching job at a Chicago-area public school to marry her wealthy fiance. But when he calls off the wedding (at the instigation of his mother, who realizes what Elizabeth is really after), she returns to the position and strategizes about making her way back to Easy Street.

A full inventory of Elizabeth’s transgressions against professional decorum and general decency would go on and on. She’s foul-mouthed, slatternly, racist, conniving, lazy and cruel.

She self-medicates with alcohol and marijuana, often while on the job, and her idea of instructing her seventh-grade charges is to show them Hollywood films about the teaching profession. Designed to exploit Diaz’s sex appeal, the role is the opposite of empowering.

Working from a script by Gene Stupnitsky and Lee Eisenberg, director Jake Kasdan has fashioned a monotone picture in which every stab at humor derives from humiliation. And although the simulated, elongated sketch comedy lacks precision and is incapable of inciting outrage (let alone sullying the teaching profession), it does make the viewer feel rather dirty.

True, Elizabeth ultimately gives Russell a chance, yet the possibility she can be saved by the right guy is undercut by doubts regarding his character and motivation. So, ultimately, this dreadful teacher doesn’t really grow or learn anything new — and neither does her audience.