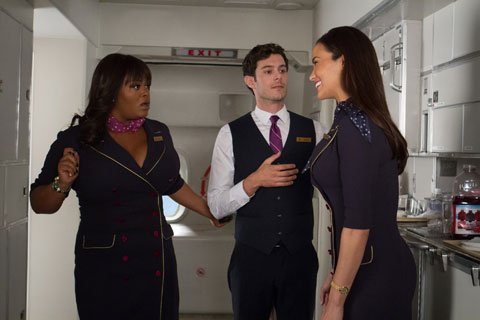 NEW YORK (CNS) — A good man is hard to find, especially at 30,000 feet. So a determined flight attendant searching for a soul mate among her passengers discovers in the romantic comedy "Baggage Claim" (Fox Searchlight).

Director David E. Talbert ("First Sunday"), who also adapted the screenplay from his 2005 novel, charts an old-fashioned, predictable course with some thematic turbulence along the way. Though riddled with cliches and overly sentimental, "Baggage Claim" is ultimately a trip worth taking. It’s that Hollywood rarity, a film that upholds and promotes the institution of marriage.

Montana Moore (Paula Patton) thinks she’s finally found Mr. Right in wealthy businessman Graham (Boris Kodjoe). Unfortunately, on the eve of their "engagement," he turns out to be married.

"My relationships have never been cleared for takeoff," Montana laments to William (Derek Luke), her neighbor and friend since childhood. "I don’t want to end up alone in a house full of cats."

Her mother, Catherine (Jenifer Lewis), has the opposite problem, having been married five times.

When Montana’s younger sister, Sheree, (Lauren London), announces her engagement, Montana is determined to make it to the altar at last (and shed her relationship "baggage"). With the help of colleagues Gail (Jill Scott) and Sam (Adam Brody), Montana arranges in-flight rendezvous’ with a series of ex-boyfriends, hoping to rekindle a past romance.

We follow Montana’s slapstick adventures in the air and on the ground as she reunites with, among others, record producer Damon (Tremaine "Trey Songz" Neverson), rising politician Langston (Taye Diggs), and millionaire Quinton (Djimon Hounsou).

To her credit, Montana resists the temptation to settle for second-best and a life of submission and exploitation. She’s looking for true love, a lifelong commitment, and mutual respect, and is willing to wait. Unfortunately, she’s not always so patient where sex is concerned.

In the end, Montana realizes that staying married is a bigger challenge than just getting hitched. For that reason alone, "Baggage Claim" deserves a test flight.

The film contains implied nonmarital sex, mature references, including to homosexuality and contraception, a same-sex kiss, innuendo and some crude language. The Catholic News Service classification is A-III — adults. The Motion Picture Association of America rating is PG-13 — parents strongly cautioned. Some material may be inappropriate for children under 13.