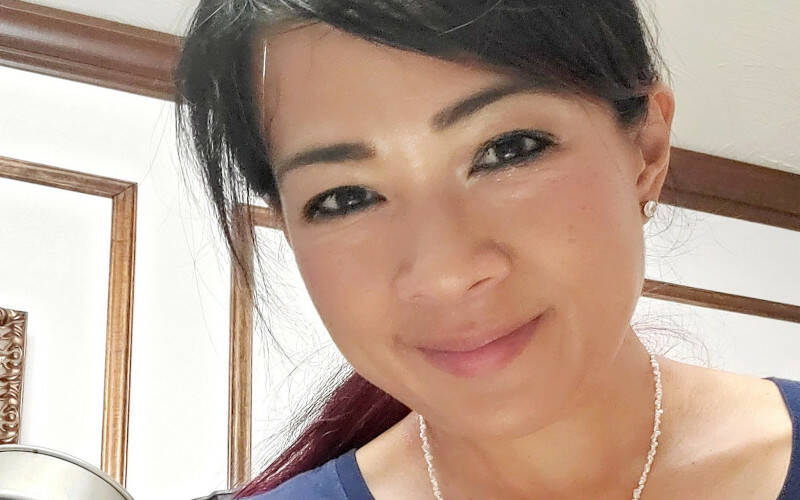 Lani Pascual, a member of Our Lady of the Greenwood Parish in Greenwood, Ind., uses her talents as a baker to spread and share God’s love. (CNS photo by Lani Pascual)

INDIANAPOLIS (CNS) — Some of her creations are simple and delicious, like the tasty chocolate chip cookies she has been making since she was 13.

Others are more elaborate and decadent, like the wedding cakes she creates or the snickerdoodle cookies that she fills with caramel cream inside.

And all of Lani Pascual’s creations are part of her recipe for adding extra helpings of joy, faith and love to the world — a generously flavored approach to life that is known as “Bake It Forward.”

While Pascual didn’t create the concept of Bake It Forward, the 47-year-old mother of two has embraced it as a way of spreading and sharing God’s love with others through the gift of baked goods.

That includes the 50 gingerbread house kits that she and two friends made last Christmas for families in need of some extra holiday cheer.

Pascual also has donated earnings from her at-home bakery, The Stacked Cookie, to help a 13-year-old girl diagnosed with terminal cancer. The girl used the money to buy supplies to make bracelets that she sold as a fundraiser for Riley Hospital for Children in Indianapolis.

And when parents at Our Lady of the Greenwood School in Greenwood, Ind., order cookies from Pascual for their child to share with classmates on their birthday, Pascual tells the parents to make a donation to the school instead of paying her.

“I tell people that God gave me the recipes, so they’re meant to do his good work,” said Pascual, a member of Our Lady of the Greenwood Parish. “I really do try to use them to do good things.”

As an afterthought, she added with a smile, “It’s funny where God leads you.”

After all, her original plan was to try to help and heal people as a doctor, not as a baker.

Growing up, Pascual had the kind of intelligence that gave a certain hope to her mother, a native of the Philippines, and her father, who comes from a family whose roots are in that country.

“I was like every kid who’s good at math and science coming from an Asian family — ‘You should become a doctor,’” she recalled with a smile.

One professor saw how much joy Pascual had in making and sharing her cookies that she encouraged her to consider baking as a career.

Pascual also began to have doubts about her future as a doctor when she began to fill out her medical school applications, and all she could write about her reason for pursuing that profession was, “I like to help people.”

Instead, she earned a master’s degree in public health at the University of Michigan. There, she spent her free time writing recipes in a journal that she had been given as a college graduation gift — from the professor who encouraged her to become a baker.

She also did a lot of baking, including making fresh wheat bread to save money. The enticing smell of the homemade bread was just one of the reasons that attracted a fellow student named Andrew Rusiniak, living in the same dorm, to her.

The first of their two children, Jonah, was born in 2009 — a birth that also stirred up Pascual’s long-simmering passion.

“Jonah is autistic,” she told The Criterion, newspaper of the Archdiocese of Indianapolis. “I decided that of all the kids I should be teaching, it should be him. I decided I needed to leave my teaching career. I felt God was calling me to do something else. I’d always done baking, and I thought I could do that.”

Her new plan blended in a surprisingly sweet way with a part of her family’s history.

It’s the story of her paternal grandmother — Ambrosia Delosantos.

“Her name means ‘food of the God, of the saints,’” said Pascual, whose own name translates to “Heavenly Easter.”

“My grandmother was a teacher first, too, in the Philippines. My grandfather was a farmer who was recruited to leave the Philippines and come to Hawaii in 1946 to work in the pineapple and sugar cane fields,” she said.

“In Hawaii, my grandmother helped support the family with a bakery in her house. She was known for a lot of service with her bakery. She was helping families in need. When you start cooking, you learn there’s a lot of people in need.”

Pascual loves that connection with her grandmother. She loves that they share the approach of Bake It Forward.

One special ingredient passed down through the generations of her family brings everything together for Pascual — an ingredient that flavors her life in such a rich, satisfying way that she becomes emotional talking about it. She has already shared it with sons Jonah, now 12, and Samuel, 8.

“There’s something very beautiful about the Catholic faith,” she said as tears filled her eyes. “It’s the tradition of love that was given to me by my grandparents and my parents, and I want to give it to my kids. I love that my kids are in Catholic school and they want to help me with what I do.”

She then shares another story of the influence of family in her life.

“My mom’s parents also formed my Catholic faith and ideals,” she said. “My mom’s dad, Fernando Nang-is, was the first in his village to welcome and accept the Spanish Catholic missionaries. He was a councilman in his tribe. After his conversion, my grandfather built the first school in his village.”

For Pascual, faith and family have always been intertwined. Her faith leads her to believe that we are all part of the same family.