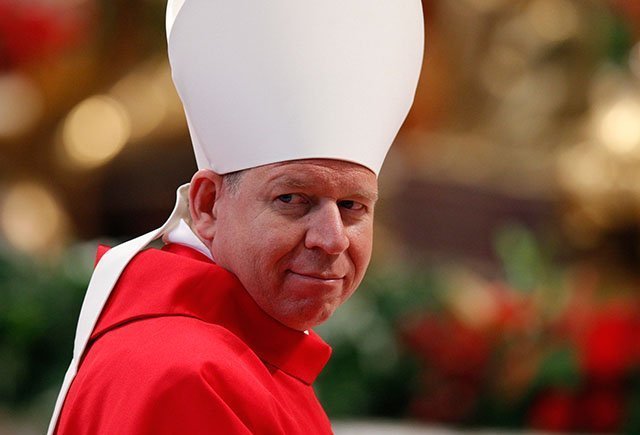 Archbishop Gintaras Grusas of Vilnius, Lithuania, is seen in St. Peter's Basilica at the Vatican in a 2013 file photo. Archbishop Grusas voiced concern about possible Russian aggression against Lithuania, Latvia and Estonia.

WARSAW, Poland (CNS) — A top Baltic church leader voiced concern about possible Russian aggression against Lithuania, Latvia and Estonia, and appealed to Western Catholics to be better informed about the situation.

"We’re in the front line, and Russia has made its intentions clear. While we feel NATO’s support, we know the front could move forward if the international community fails to stand firm," said Archbishop Gintaras Grusas of Vilnius, president of the Lithuanian bishops’ conference.

"What isn’t fully realized in the West is that the information and propaganda war which preceded the military action against Ukraine is very much underway here, too. There’s a high degree of tension, and everybody here knows how dangerous the situation has become."

The archbishop spoke to Catholic News Service Dec. 11, nearly a week after the U.S. House of Representatives approved an additional $1 billion for training and deploying U.S. forces in the Baltic States and Eastern Europe.

Lithuania’s parliament, the Seimas, also voted to increase defense spending by a third in 2015, a move paralleled in Latvia and Estonia.

Archbishop Grusas told CNS anxieties were now high about a Russian move against Lithuania, which is bordered in the south by Moscow’s military base at Kaliningrad.

He added that Moscow had launched "sanctions and information campaigns" over the past year against his country, as it did after Lithuania declared independence in 1990, and said recent Baltic border incidents appeared to signal "new types of indirect aggression."

"The three Baltic states are relatively small countries, which can be pressured more easily than Ukraine," Archbishop Grusas told CNS.

"Russia is a great country, with great people. But the desire to promote that greatness, perhaps with new empire-building, runs deep in the Russian mindset under President Vladimir Putin. They’ve expressed a belief they have a right to lands they once ruled."

Lithuania, Latvia and Estonia became independent from the Soviet Union as United Nations member-states in 1991 and joined NATO and the European Union in 2004, gaining protection under the alliance’s Article 5 collective defense guarantee.

However, security concerns have grown since Russia’s March annexation of Crimea and military involvement in Ukraine, which triggered Western sanctions against its defense, oil and banking sectors.

Lithuania’s Defense Ministry has reported irregular Russian air and naval movements in the Baltic Sea, where NATO fighters were scrambled seven times in the first week of December.

A Vilnius University military historian, Deividas Slekys, said Western experts were "well aware" of current Russian activities, but added that political leaders appeared not to have fully grasped the seriousness of the situation.

He added that Baltic officials had repeatedly warned of renewed Russian aggression, but had been accused by NATO and EU counterparts of "paranoia and over-reaction."

"It’s now clear we were justified, although many Western leaders are still struggling to understand what’s happening in Russia," Slekys told CNS Dec. 12.

"Support for NATO and EU membership is strong here, according to opinion polls. But there are also historical memories of how Western countries were reluctant to intervene previously. Although people believe NATO will act, the real question is when — and how long we’d have to defend ourselves first. Russian propaganda is exploiting these anxieties."

Archbishop Grusas said, "Catholics need to pray for peace — but they also need to be well-informed and grasp the geopolitical situation."

"The Cold War may be part of history, but we shouldn’t be naive or allow ourselves to forget about the past. One of the greatest dangers is being lulled into complacency, thinking we no longer have to work for peace," he said.

"It’s a source of solace that we’re members of NATO — the U.S. has sent troops, so there are boots on the ground here in a visible and appreciated sign of solidarity," Archbishop Grusas said.

"But from their many years of occupation and oppression, Lithuanians understand the Russian mentality — they know if you try to bargain nicely, it’s seen as weakness. There needs to be a strong, solid response."

Catholics make up 79 percent of Lithuania’s 3.7 million inhabitants, according to official data, compared to a quarter of citizens in Latvia and less than 1 percent in Estonia.

All three Baltic States are home to substantial Russian minorities, numbering 5 percent in Lithuania, 27 percent in Latvia and 25 percent in Estonia.

Kastantas Lukenas, a spokesman at the Lithuanian Church Information Center in Kaunas, said most Lithuanians were uneasy at Europe’s "slow, divisive reactions" to the conflict in Ukraine, adding that the country had no legal means to restrict the "hardcore propaganda" being received by "pro-Russian audiences."

Lukenas said European Union attempts to advance homosexual rights in the Baltic States had also been "used very successfully" by the Putin government and the Russian Orthodox Church to show Russia was "defending Christian values against Western decadence and corruption."