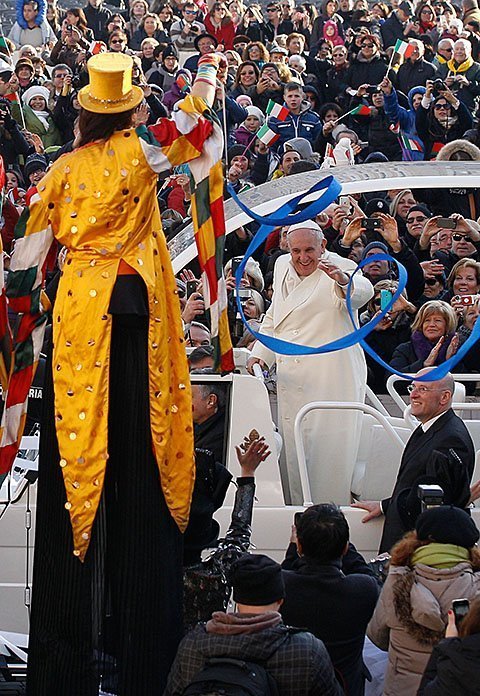 Pope Francis passes a circus performer on stilts as he arrives to lead his general audience in St. Peter's Square at the Vatican Jan. 8.

"With baptism, we are immersed in that inexhaustible source of life that is Jesus’ death, the greatest act of love in all of history," he said during his first general audience of 2014.

The pope spent nearly two hours after the audience Jan. 8 greeting people, blessing the sick, speaking with newlyweds and receiving notes, letters and late Christmas gifts from the crowd. He also watched a brief performance by acrobats, jugglers and clowns who were part of an international Golden Circus festival.

During his usual rounds through St. Peter’s Square in the popemobile before the start of the audience, the pope caught sight of a friend in the crowd. The pope had the driver stop the popemobile and gestured for his friend to board the vehicle.

The friend, Father Fabian Baez, sat in the back seat, then walked with the pope to a special seating section for guests.

Passionist Father Ciro Benedettini, vice director of the Vatican press office, said the priest works in a parish in Buenos Aires and that the pope said Father Baez was "a great confessor."

The pope began the new year of audience talks with a new series of catecheses on the sacraments, starting with baptism — the sacrament that "grafts us as living members in Christ and in his church."

Baptism isn’t merely "a simple rite, a formal act of the church," he said. "It is an act that profoundly touches our existence" and radically changes the person.

By being immersed in the living waters of Christ’s salvation, he said, "we can live a new life, no longer at the mercy of evil, sin and death, but in communion with God and our brothers and sisters," embarking on a whole new life.

The pope reminded his audience that it was very important for Christians to know the date of their baptism because it was "a happy day" of celebration.

Recalling that event is important because there is always the risk people think of it as something that happened in the past or that it was something just their parents wanted, and was "not of our volition."

Even though chances are people were just infants on that day and can’t remember it firsthand, "We have to reawaken the memory of our baptism" and live it every day as a great gift from the Lord, the pope said.

"If we are able to follow Jesus and remain in the church, even with our limits, frailties and our sins, it is precisely because of the sacrament in which we became new beings and were vested in Christ."

The power of baptism frees people from original sin, grafts them to God and makes them bearers of "a new hope" that nothing and nobody can destroy, he said.

"Thanks to baptism, we are able to forgive, to love — even those who offend us and hurt us; that we are able to recognize the face of Christ in the least and the poor," he said.

The fact that baptism is always conferred by a priest in the Lord’s name shows it is a gift that is passed on from person to person "a chain of grace," he said. It is "an act of fraternity" and becoming a child of the church, who, like a mother, generates new children in Christ through the Holy Spirit.

The full text of the pope’s audience remarks is available online in English and Spanish.