Barbershop: The Next Cut - Catholic Courier 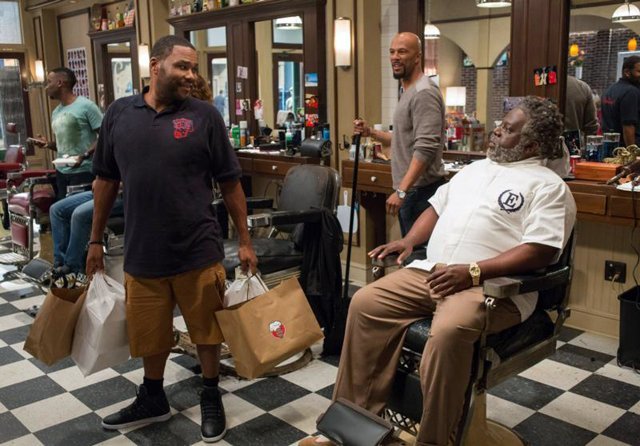 Anthony Anderson, Common and Cedric the Entertainer star in a scene from the movie "Barbershop: The Next Cut." The Catholic News Service classification is L -- limited adult audience, films whose problematic content many adults would find troubling. The Motion Picture Association of America rating is PG-13 -- parents strongly cautioned. Some material may be inappropriate for children under 13.

NEW YORK (CNS) — "Barbershop: The Next Cut" (Warner Bros.), director Malcolm D. Lee’s third entry in a franchise that began in 2002, is a fundamentally moral film. As scripted by Kenya Barris and Tracy Oliver, it upholds community values and vindicates marital commitment.

Yet some of the distasteful detours their screenplay takes along its path to a respectable wrap-up will necessarily narrow this sequel’s appeal even among grown moviegoers.

A seriocomic portrayal of life on Chicago’s South Side, the picture, like its predecessors, affectionately surveys the area’s strengths and weaknesses from the vantage point of the shop of the title, owned by and named for Calvin (Ice Cube). Long a neighborhood hangout for men, Calvin’s has now been augmented by the addition of a beauty parlor run by the original proprietor’s new partner, Angie (Regina Hall).

Accordingly, much of the barbed chitchat exchanged among the ensemble of co-workers and friends concerns the battle of the sexes. Leading participants in this back-and-forth include series stalwart Eddie (Cedric the Entertainer), the still-playful representative of an older generation, and newcomer Rashad (Common), husband to returning character Terri (Eve).

Terri’s success as a high-profile haircutter has left her overtaxed and neglectful, which opens the way for Calvin’s resident bad girl, Draya (Nicki Minaj), to make a play for Rashad. Responsible dad Calvin, meanwhile, is struggling to keep his 14-year-old son, Jalen (Michael Rainey Jr.), on the straight and narrow.

What concerns Calvin most is the possibility that Jalen might join one of the gangs whose murderous violence plagues the South Side. The headline-grabbing damage wrought by such groups, and the difficulty of curbing it, leads to earnest but heavy-handed debates among the denizens of Calvin’s. Eventually they strike on the idea of sponsoring a weekend-long truce during which they’ll offer local residents their services for free.

Family unity and civic decency are certainly worthy themes. But, as served up here, they come with a price. Viewers are taxed not only by numerous vulgar jokes, but by a couple of scenes in which female characters degrade themselves by attempting to excite male lust in an almost animalistic way.

These images not only violate the dignity of the characters concerned, they seem to play into racist notions about black sexuality that ought to be dispelled not reinforced.

The film contains some demeaning, though nongraphic, sexual behavior, much sexual humor, fleeting rear nudity, a handful of profanities, at least one rough term, pervasive crude and crass language and an obscene gesture. The Catholic News Service classification is L — limited adult audience, films whose problematic content many adults would find troubling. The Motion Picture Association of America rating is PG-13 — parents strongly cautioned. Some material may be inappropriate for children under 13.