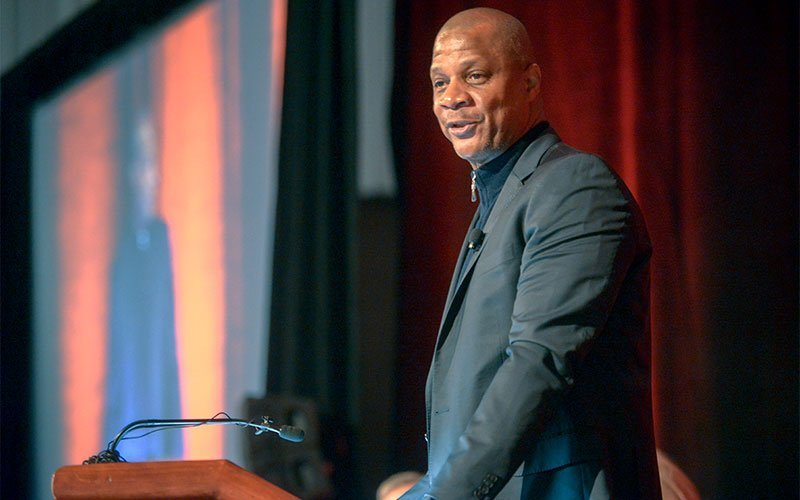 ROCHESTER — He burst onto the major-league scene with a catchy name, a 6-foot-6-inch frame, and the capacity to knock baseballs into orbit with his impeccably fluid swing.

With such lofty credentials, Strawberry had every good reason to reminisce about his feats during a keynote speech on March 15.

But he spoke nary a word about baseball. For Strawberry, there were much bigger matters to address.

He instead focused on the life that began for him 16 years ago. By then, the headlines had shifted from Strawberry’s athletic prowess to his many personal difficulties: colon cancer, rampant drug use, arrests, and time spent in prisons and drug-rehabilitation centers.

Yet he said that when he began opening himself up to God’s call, his life changed drastically for the better. These days, Strawberry — who turned 57 on March 12 — travels the country imploring others to heed God’s message as well.

“It’s not about the success of a man. It’s about the faith of a man,” Strawberry told his audience at the Rochester Riverside Convention Center during the Breakfast with Friends benefit for Catholic Charities Community Services. The eighth-annual event included an invocation by Bishop Salvatore R. Matano.

Strawberry spoke frankly about his startling fall from grace, which saw him go from hitting home runs in packed stadiums to frequenting drug houses in order to smoke crack.

“I shouldn’t be here. Because of drug addiction, I should be dead,” he stated.

He received a one-year, drug-related suspension from Major League Baseball just prior to the 2000 season and never played in the big leagues again, falling far short of what had appeared to be a surefire Hall of Fame career. After averaging nearly 140 games played and 31 homers in his first nine seasons, Strawberry averaged just 42 games and seven homers over his final eight campaigns.

However, while at rock bottom, Strawberry first became open to turning his life over to God. His successful recovery from addiction had begun.

“The broken pieces of my life have been restored by Christ himself,” Strawberry said, adding, “God is a miracle maker. His plan is greater than anything I ever achieved in my life.”

Strawberry emphasized that although others passed judgment on him, God never did, saying that God forgave him and “met me in the middle of all my pain.”

“He will never, never forsake you. He will always be there when everybody else is gone,” Strawberry added. “He loves people, every one of us.”

Approximately one decade ago, Strawberry received another call from God — to begin preaching.

Strawberry is now an ordained Christian minister. He and his third wife, Tracy, operate Strawberry Ministries, which is dedicated to restoring lives and relationships affected by substance abuse.

“It is such a privilege that I get to work for God,” Strawberry said. “I used to live in the greed, the success. It will never, ever be about me again. It will always be about helping someone else.”

Strawberry implored audience members to join him in bettering the lives of others, especially those who are disadvantaged. He lauded Catholic Charities Community Services as proof positive of what can be achieved; the organization provides a variety of support services for 3,000 individuals in the Rochester Diocese who are living with developmental disabilities, traumatic brain injuries and chronic illnesses including HIV/AIDS.

“I will tell you, get involved. Volunteer. Give,” said Strawberry, commenting that our country is “broken spiritually” and filled with people in desperate need, such as those affected by the ongoing opioid crisis.

“God needs your heart,” said Strawberry, who received a standing ovation. “God has called America to come back to caring and loving. He’s calling all of us.”