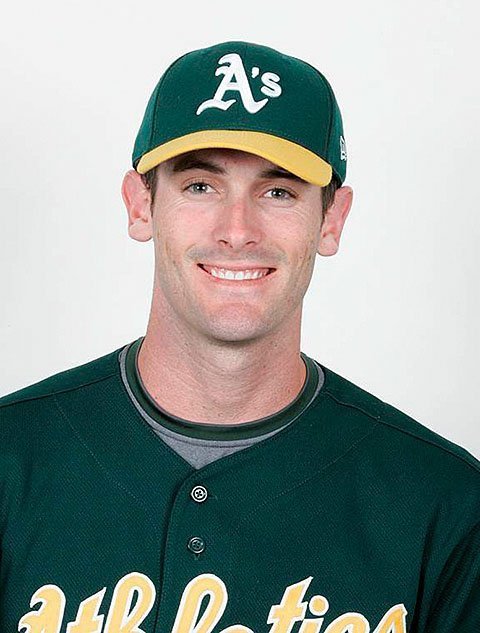 Former Oakland A's player Grant Desme is studying to become a Norbertine priest. He stunned his team and the baseball community when Grant Desme decided at age 23 to retire from the game to pursue a vocation.

OAKLAND, Calif. (CNS) — Bishop Michael C. Barber was able to do what general manager Billy Beane could not: Call Grant Desme to Oakland.

Four years ago, the Oakland Athletics and the baseball community were stunned when Desme responded to an invitation to spring training by retiring from baseball at age 23 to pursue a vocation as a Catholic priest.

"I thought, ‘You’re kidding me.’ To be a professional ballplayer, whether its baseball, football, basketball, is the dream of many young men. Perhaps it’s the dream of some of you guys," the bishop told the young men of De La Salle High School and the new De La Salle Academy, as he began his homily at the Mass of the Holy Spirit at the school Aug. 27.

De La Salle’s high school football season opener would be televised nationally in two days; a movie inspired by the football program, "When the Game Stands Tall," had opened in theaters nationwide five days before.

In his work with seminarians, Bishop Barber told them, he met men who told him they gave up promising careers in business, real estate and computers. His response: "You didn’t give up as much as this guy. He could have been famous. He could have been a great baseball player."

"I always wanted to meet this guy," said the bishop, head of the diocese since May 2013. When he got to Oakland, he found Desme at St. Michael’s Abbey in Southern California. The bishop called the abbot, asking to borrow Desme for the visit to De La Salle.

At the bishop’s invitation, one of the three seminarians seated on the platform that served as the altar strode to the microphone to explain why he gave up a baseball career for the priesthood. Entering the abbey of the Norbertine order, he had taken vows of poverty, chastity and obedience. He also had been given a new name: Frater Matthew.

"I was one of those boys," he said. "I grew up, ever since I can remember, dreaming, living, breathing baseball."

He began playing the game at age 4. "I had the dream of becoming a big leaguer."

Motivated by his goals, his hard work and translated into success on the field. He played college baseball at Cal Poly San Luis Obispo.

"By the end of my junior year, I was a first team All-American, won the triple crown award for Big West conference, was player of the year and ended up being drafted in the second round of the 2007 draft by the Oakland Athletics," he said. "That was one of my great dreams, and a big steppingstone along the way on where I wanted to be.

"But at that point in my life, I was not where God wanted me to be," he said. "Because about that time, God really started rocking my world. I had everything figured out. I was on top of the world: successful at baseball, not having to go to school, having a big contract."

But then he was hit by a pitch that broke his right wrist. "It was supposed to be six-week injury," he said, but it stretched into a year and a half, requiring surgery.

During that period, after his anger passed, "I decided to start praying and trying to figure out what the meaning of all this was," Frater Matthew said.

He found that the source of his anger and frustration was that he thought he had it all figured out — he had worked hard, met his goals and done everything he could do to be successful — only to have an injury that was out of his control.

He questioned the purpose of everything, he said. "It ended up making me think a lot about death, a lot about my entire existence on this earth. It made me confront the big questions about life, and it led me to God."

After that year and a half of deep reflection, he regained his health in mind and soul, he recalled, but he didn’t for the abbey.

What a year he had: He was the only minor leaguer who had a 30-30 season and asked to play in the Arizona fall league, where top prospects showcase their skills.

He also had a desire to be married and be a father, he said.

"I ended up having an even more amazing fall league that I ever could have imagined," Frater Matthew said. "It was a gift from God."

After winning MVP of the league, he received the invitation to spring training with the Oakland A’s.

"But after all that, it still left me with this yearning in my heart that there was something more," he said.

That yearning led him to St. Michael’s Abbey of the Norbertine fathers. He spent a week there, living their life, and "got the sense this is where God wanted me to be."

The reaction to his decision to leave baseball, he said, surprised him. "It was God’s grace working through all that to help people to see that God is what matters."

Frater Matthew has completed the first four of his 10-year journey to the priesthood. "It’s been a great, wonderful, challenging, terrible journey, because God wants the absolute best of us."

Jurich is a staff writer at The Catholic Voice, newspaper of the Oakland Diocese.