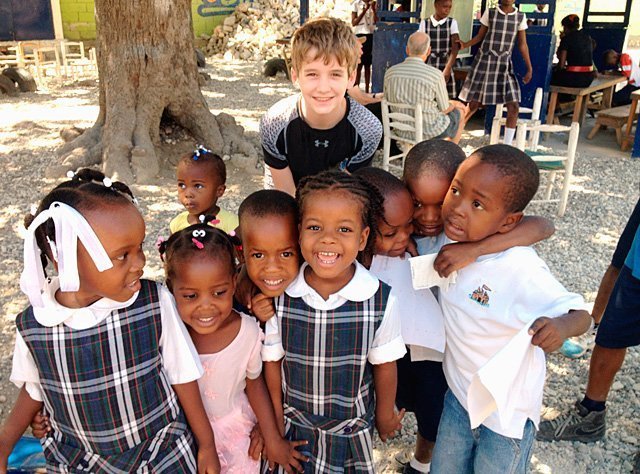 Avery Gilges, who was 10 years old when this photo was taken in February 2014, poses with children who are part of an early childhood development program started by the Louverture Cleary School in Haiti.

Liz Gilges is throwing a huge party on her massive Canandaigua lawn on June 13, complete with a catered dinner, cocktails, live music, dancing and an auction. Although she’s looking forward to what she hopes will be a fun social event, she’s even more excited about the prospect of using the party to raise awareness of and funds for two of her favorite institutions — St. Mary School in Canandaigua and the Rhode Island-based The Haitian Project and its Louverture Cleary School, which is located outside of Port-au-Prince, Haiti, in an area called Santo.

Gilges has been an ardent supporter of St. Mary School in Canandaigua for more than 10 years. Four of her six children graduated from the school, and one currently is enrolled there. She’s also been a longtime supporter of The Haitian Project, but an unexpected cancer diagnosis in 2011 indirectly led her to take a more active role in that project, which operates a Catholic, coeducational boarding school for talented and motivated students from Haitian families who otherwise could not afford to educate their children.

"I was in bed for six months (after the cancer diagnosis), and I said to myself, ‘When I get better, I want to take my family on a mission trip.’ When you have so much time you start to think about what’s really important," said Gilges, who has fully recovered.

With assistance from a friend on The Haitian Project’s board of directors, Gilges brought her family to Haiti for a week during a school break in February 2014. They worked alongside Haitians to scrape, sand, wash and paint walls, and they ground rocks to make cement, but what really stuck with the Gilges family was the dedication and cheerful demeanor of the young volunteer teachers at the Louverture Cleary School.

"I was so impressed with them, with their cheerfulness, and their getting up at 6 in the morning for prayer and collecting garbage after teaching all day. They motivated me, and they made me fall in love with the place," said Gilges, noting that the volunteers provided great role models for her children.

During Gilges’ 2014 visit to Haiti, she was approached by Deacon Patrick Moynihan, president of The Haitian Project and dean of its Louverture Cleary School, and asked to be on the organization’s board of directors. She accepted his invitation and immediately began looking for ways to drum up local support for the organization. At the same time, she didn’t want to attract local donors to The Haitian Project at the expense of other worthy causes, especially St. Mary School, she said.

"I love St. Mary School and I love The Haitian Project. I would like to help both of them," she remarked.

The June 1 lawn party will provide a way to fulfill that desire, since proceeds from the event will be evenly divided between the two beneficiaries, she added. Members of The Haitian Project’s board of directors will available to tell party-goers more about their organization, and representatives from St. Mary School, including Principal Ann Marie Deutsch, also will be on hand to talk about the school. Some of the teachers from St. Mary School will be tending bar during the party, while teen alumni will be serving food. Alumni who currently are in high school and have earned their drivers’ licenses will be providing valet-parking services, she added.

Tickets to the lawn party may be purchased for $100 via St. Mary School’s website, www.stmaryscanandaigua.org. Dinner will be catered by Nolan’s, and music will be provided by classic and contemporary rock band 7 Sense.

Gilges said she was motivated to plan the party by the need to support Catholic education at home and access to quality education in Haiti. Her own children have benefitted from their years at St. Mary School, where prayer is not only allowed but encouraged, and where students regularly participate in Mass, the sacraments and adoration of the Blessed Sacrament. This is especially important in a society that rarely prioritizes faith, she said, voicing a concern that the Catholic faith will die out if parents do not actively pass it on to their children.

"St. Mary has supported us in trying to raise our children in the faith," Gilges said.

And The Haitian Project supports Haitian families who want to provide an education for their children so those youngsters can maximize their potential and work toward building a Haiti where justice and peace thrive, she added. Strengthening Haiti’s educational system is the only way the nation can begin to overcome the poverty that oppresses so many of Haiti’s 10 million residents, Bishop Launay Saturne of Jacmel, Haiti, told Catholic News Service in March, when he asked Catholic bishops in other countries to consider encouraging their parishes to form partnerships with Catholic schools in Haiti.

"Education is the only way to help people out of poverty," she explained. "You can give them food, but that doesn’t last forever. If you give them an education and skills, they can buy their own food."